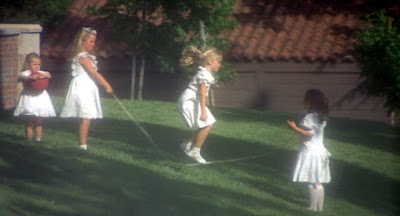 Creepy children songs and horror movies go together like beans and farts.

(Side note: [Can I start a piece off with a side note?] I seem to pass the blame off onto the boys in my life [husband and brothers in particular] for all the fart and poop jokes that are a daily constant, but I'm becoming more and more conscious of the fact that it is I who brings it up in most conversations. ...Let us keep this our little secret though.)

Nursery rhymes and lullabies sung just right and set to the perfect scene contain the power to have a lasting effect on our senses.

There's just something so ominous and terrifying about children's songs and nursery rhymes being used in film. Could this be attributed to the fact that the history behind so many of these tunes has been lost or forgotten over the years and that so many of them stem from horrific events? That's part of my assumption, but in reality, all it takes is some sweet child's voice innocently singing a song in anything other than a Disney film and I am on edge, awaiting the inevitable. 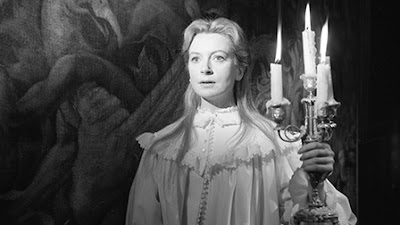 The best intro to this would have to be the opening scene of The Innocents (1961). A child sings “O Willow Waly” as we watch a black screen for a solid 45 second before the 20th Century Fox logo opens the film. Apparently some projectionists edited the opening to begin with the appearance of the logo, as they believed this to be a mistake. Can you imagine being in the audience watching this when it was first released? The song is, of course, used with mounting tension throughout the whole film and gets better every time it's heard.

From the master of creepy children singing comes Alfred Hitchcock's The Birds, and a group of schoolchildren singing “Risselty Rosselty” in an almost a ghostly chorus as a flock of crows slowly gather on an empty playground. Because where there's a gathering of crows, there's bound to be a group of children calling them to murder through song.

Children of the Corn. That is all.

“One Two, Buckle My Shoe” has been around for over 200 freakin' years. TWO HUNDRED. My favourite version is, of course, from A Nightmare on Elm Street. Why wouldn't it be? Because creepy kids singing an innocent song eventually leads to “Freddy's Coming for You.” I don't think of happy skipping, I think of murder in a spectacularly funny way. 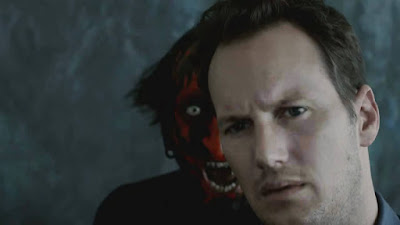 And who can forget that fantastic scene of the demon sharpening his claws to “Tip-toe Thru' the Tulips with Me,” a song from 1929 that was used in the first Looney Tunes cartoon short and revived in the '60s by Tiny Tim, whose version is used in James Wan's Insidious. Tip toe through the tulips indeed. Right to your freakin' death by red face demon.

But it doesn't have to be a horror movie or a child’s voice to achieve that creepiness factor. In fact, some of the most chilling children’s songs or nursery rhyme moments in film were achieved by an adult performance.

I have been trying my best to not watch movie trailers for a while, as my history with them has been somewhat rocky (I think Jupiter Ascending is my perfect example). I am, for the most part, perfectly content to sit back and await the film itself. And I will put $5.00 on the table right now and say I might have been the only one who did not watch the Avengers: Age of Ultron “No Strings on Me” trailer pre-movie release. Enter Ultron and his version of Pinocchio's song “I've Got No Strings On Me” and I have to be honest, it is definitely my most memorable moment from the movie. It was only afterwards as I read about the movie and tried to recapture that initial creepiness factor that I learned of the advertising campaign of that particular scene/theme and realized that the rock I had been sheltering under had grown quite large over time. What can I say, it worked on me, and I believe it was due largely in part that it was unexpected. 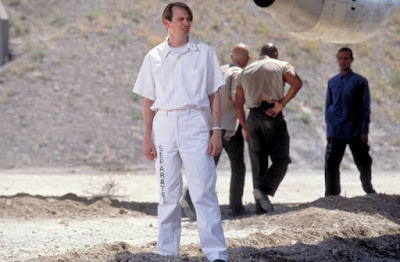 Another non-horror and unexpected moment that still creeps me out and makes my list: Steve Buscemi as Garland Greene in Con Air singing “He's Got the Whole World In His Hands” with the little girl he happens across. That moment still give me chills, as the sweetness of the girl is in such sharp contrast to the creepiness of Buscemi's eyes and expression in the scene.

Andy Robinson's version of “Row Row Row Your Boat” in Dirty Harry comes in as runner up for best serial killer singing a nursery rhyme. Yelling the song at a busload of scared children gives it a whole other texture. (Side note: apparently I use the word “buttload” too often, as “busload” was my second word option).

Lastly, while technically not a nursery rhyme or kiddy tune (it was an innocent song I learned as a child though), for me is THE song with the starkest contrast from first introduction to reproduction: “Singing in the Rain” sung by Alex (Malcolm McDowell) in A Clockwork Orange. Because when I walk around singing it (and this happens quite regularly), I'm definitely not imagining Gene Kelly as my singing and dancing partner. It's Malcolm McDowell, all kicky and rapey with his “droogs” and I'm pretty sure that's not right.

I blame memorable innocent and children's songs. And the sinister worlds of terror they bring to mind.
Posted by Patrick Bromley at 5:00 AM

Email ThisBlogThis!Share to TwitterShare to FacebookShare to Pinterest
Labels: a clockwork orange, a nightmare on elm street, avengers age of ultron, con air, horror movies, insidious, the birds, the innocents