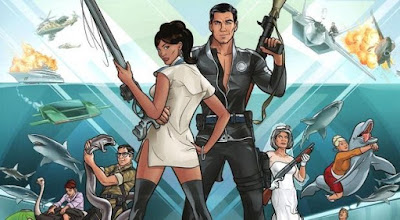 What lullaby guides you into your slumber every night? Is it a favourite album? The radio? A late night infomercial on the tele? Homer making soothing ocean noises? For me, it's the intelligent, funny and incredibly entertaining Archer. Every night. For the past two years. I don't have a problem.

The series deliberately mixes time settings, clothing styles from the sixties, technology of our today and of days long passed. It is referred that Fidel is the current leader of Cuba and that Woodhouse served in The Great War. Historical backdrops vary and... yep, we are officially confused. Nobody knows when the series is set, even the characters themselves, and that's just fine by me.

In a show that is chock full of cultural references, I find my ears always perk up when any film is referred to or parodied. As I was going through each episode for the billionth time, I thought I would jot down a few of the films that were mentioned in the first couple of seasons. Depending on how this one plays out, I may have to continue with seasons 3 through 7 as I am quite enjoying this journey so far.

Episode 1 ("Mole Hunt"):
When Archer is confronted by Carol/Cheryl about standing her up for their date the previous evening, he asks her if she's seen Brian's Song (1971) and mentions the same thing happened to him and he had to help a guy with cancer.

Additionally, Archer describing all of the ISIS mainframe security measures is quite similar to the manner in which Ethan Hunt (Mission: Impossible, 1996) lists off the security system guarding the IMF Mainframe. Additionally, both Archer and Ethan wind up in some very desperate situations, yet always manage to escape unscathed. Could be that they share the title of world's greatest secret agent? Also Bond. 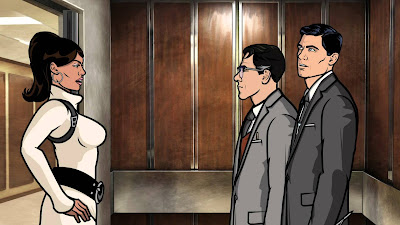 Episode 2 ("Training Day"):
Hmmm.... Do you think the name of the episode could be referring to the film of the same name? Cyril is a bit too whiny to be Ethan Hawke, but he does his best to shoot a gun and dance with a call girl. (Training Day, 2001)

Episode 3 ("Diversity Hire"):
Smart ass quips are a specialty! Archer wants a complaint unbounced on the agency's computers and Pam's response: "What am I, Tron?" (Tron, 1982)

Episode 4 ("Killing Utne"):
Sometimes direct quotes are borrowed from our beloved films. For instance, when Malory orders Lana to relinquish her grip on Cyril's collarbone (he was of course caught drooling after Archer's lady of the night), she responds with classic Darth Vader "I find your lack of faith disturbing." (Star Wars Episode IV: A New Hope)

Episode 6 ("Skorpio"):
Even specific gestures from movies aren't safe! Archer and Lana brush the tip of their noses and exchange a glance in a reference to 1973's The Sting.

Episode 7 ("Skytanic"):
Do you remember Apollo 13? 'Cause I do. And Ray wears a vest extremely similar to Gene Kranz's and huffles about in the crisis room in almost perfect imitation of Ed Harris. (Apollo 13, 1995) Man, I forgot how much I love this film! 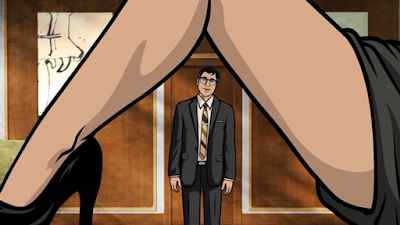 Episode 10 ("Dial M For Mother"):
Not only is the title of this episode a play on Hitchcock's 1954 Dial M For Murder, but the Cyril/Malory scene in her office, particularly the shot of him through her angled leg uttering "Ms Archer, you're trying to seduce, aren't you?" is The Graduate (1967) through and through.

While each episode and it's movie mentions ratio may be uneven, some story lines appear to demand more iconic film references than others and this one in particular has yet another key scene. Again we follow Cyril and discover him in a bathroom stall loading bullets into a gun and muttering "7, 6, 2, Millimetre. Full, Metal, Jacket." Bam - Kubrick's 1987 Full Metal Jacket.

And lastly, Archer smashing through his mother's door with a frickin' cleaver has another Kubrick gem, The Shining (1980), dripping bloody hell all over it.

The second season has a couple of my absolute favourite episodes in it, and I find that some of the more quotable moments seem to be creeping into my day to day life. And as I appear to be mostly alone in my unending love of the show amongst my immediate group of friends, the humour (for the most part) tends to fall on unappreciative ears.

Episode 1 ("Swiss Miss"):
Aside from calling my brother every horrible name under the sun (sibling love is the best is it not?), I don't really have too many nicknames for people. Archer, on the other hand, has many a nickname for his "friends" and this is a recurring gag in the show. This time around it's Ray and Lana = Bitch and Sundance (Butch Cassidy and the Sundance Kid, 1969), which I finally got around to seeing for the first time a few months ago. 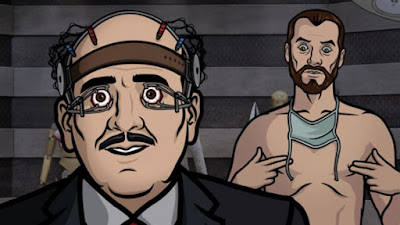 Episode 2 ("A Going Concern"): It's Kubrick again, this time with A Clockwork Orange's Modified Ludovico treatment being used to brainwash (treat?) Len Trexler and cure him of his infatuation of Malory Archer. Down one crazy lady, up one cute little bunny and some lettuce.

Another nickname gets tossed into the mix when Pam defends Cheryl to Cyril by saying: "You're one to talk, Pillbo Baggins". (Lord of the Rings/The Hobbit books/film)

Episode 3 ("Blood Test"):
Nothing. Not a damn thing that I could find. However, this is the first of my favourite episodes that needs mentioning. Just watch the damn baby throughout, that is entertainment in itself.

Episode 4 ("Pipeline Fever"):
And very quick to follow, here be my all time favourite episode.

One of the best scenes just so happens to tie in quite nicely as well: while Archer is paddling he and Lana down a gator infested swamp after blowing up the motor on the airboat he commandeered, he refers to her as the African Queen. (1951). "The.African.Queen.was.the.boat," manages to be brought up in conversation as often as I can squeeze it in. Best line ever.

In addition to that wonderful wonderfulness, we also get a minute taste of 1971's Dirty Harry. Flashback to Lana as a radical activist, and Malory pointing a gun in her face, "dear this is a .44 Magnum," and we are reminded of Clint Eastwood giving his famous line about the same gun and it's powerful powerfulness. 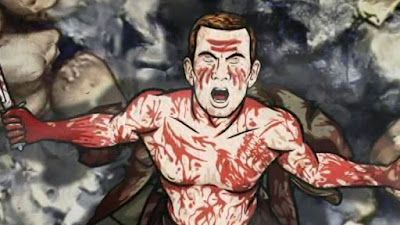 Episode 5 ("The Double Deuce"):
We have learned that Woodhouse was a veteran of the Great War and after his squadron captain is killed (a man whom he cares deeply for) he goes on a rampage, killing and scalping many Germans. Which is quite similar to Tristan's course of grief after his brother is killed during WWI in Legends of the Fall (1994).

Furthermore, Woodhouse eventually crosses paths with Malory in Tangiers at his tavern, "Reggie's Bar." It's no coincidence that the bar's name, the appearance of Nazis, North African location and the goal of getting to Lisbon have you thinking about Casablanca (1942).

Episode 6 ("Tragical History"):
Krieger has many a great moment, from underplayed to overreacted, and after Lana breaks his digital girlfriend, his reaction is straight out of the final scene of Planet of the Apes (1968).

When Cyril has a gun pointed at the bad guy and his two hot-ninja-bad-girl-sidekicks, Spelvin mentions that they couldn't all three be shot at the same time. To which Cyril responds, "No. Just you," referring to 1986's Stand By Me.

...Okay, I will. It's the line at the end of Babe (1995). I don't remember too much about that movie, perhaps I have pushed it from memory, but that one line stuck. 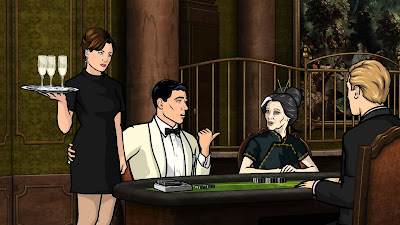 Episode 11 ("Jeu Monegasque"):
We all draw the similarities between the Archer and the James Bond characters, so it only makes sense that they would follow down the path of one of the films. This episode is in partial reference to Casino Royale.

Every now and a nod to one of the actors prior works appears. This time it's in Malory's statement “This isn't my first Grand Prix you know,” which is alluding to Jessica Walter's (voice of Malory Archer) role in the 1966 film Grand Prix.

Episode 13 ("Double Trouble"):
One of my favourite aspects of the series is the repetition of some jokes (I say SOME, as there are a couple that I could do without). One in particular is the recurring mention of Lord of the Rings. One of the techies is referred to as that Hobbit Guy and Bilbo. One moment that stands out is in this episode is when Bilbo replies to Archer, “Does one ring rule them all?” And the only appropriate response is, of course, to not engage him or it will be “all Orcs and Gollums and Balrogs.” Heh.

So whether you speakum nerd, relate to pompous asses, or have a little bit of secret agent in you (phrasing), so long as you have an appreciation for crude humour and don't get annoyed with having to figure what has just been referenced, Archer might just be up your alley. And if not, at least I just gave you a good list of movies to revisit. You're welcome.
Posted by Patrick Bromley at 5:00 AM