Question: Why would a guy want to marry another guy?
Answer: Security. 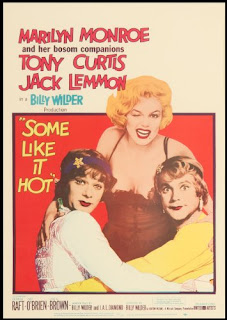 Guys have probably been dressing in drag to get a laugh since the days of the cavemen, when one night around the fire, Ook-Ook put on his mate’s fur dress to the laughter of his Neanderthal buddies. Drag was a mainstay of the English Music Hall and later, vaudeville. Both Charlie Chaplin and Buster Keaton spent time in a dress; the joke in their cases always being the same—far from a gross parody of femininity, they were both shockingly believable as women… and funny.

In the world of modern comedy, Billy Wilder’s Some Like It Hot is the Ur Stone, the Grand Pappy, and the Ne Plus Ultra of movies about guys wearing dresses. More than Charley’s Aunt on Broadway, more than Milton Berle on television, such diverse entertainments as Mrs. Doubtfire, Bosom Buddies, Just One of the Guys, White Chicks, and even She’s The Man all owe at least some of their varied pedigrees to Some Like It Hot. 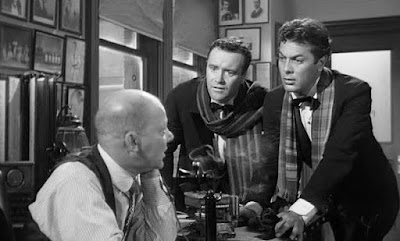 The Plot in Brief: Joe (Tony Curtis) and Jerry (Jack Lemmon) are two down-on-their-luck musicians trying to eke out a living in Prohibition-era Chicago. One day they accidentally witness the Saint Valentine’s Day Massacre and, fearing mob reprisal, decide to take it on the lam. Knowing that mob boss Spats Colombo (George Raft) will be looking for them in every male band in town, the boys get the bright idea of pretending to be girls and joining a female band, “Sweet Sue and Her Society Syncopators.” The band heads to sunny Florida, where millionaires, more mobsters, and Marilyn Monroe await.

Disguise is the key, and it is not just our heroes who are disguised. Nothing in this film is what it seems to be. A funeral parlor turns out to be a speakeasy. A cup of coffee is really illegal booze. A mobster’s flunkies are all “Harvard Men.” Sweet Sue is anything but sweet. Deep Sea fishing is NOT deep-sea fishing, a driver’s license is not a driver’s license, and when Sugar mentions always getting “the fuzzy end of the lollipop,” methinks she is not speaking of anything to be found in a candy store. Clearly the film’s use of double entendre was intended to skirt the production code at the time, but it is appropriate that, in a movie based on disguise, the very language the characters use enjoys its own forms of semantic disguise. 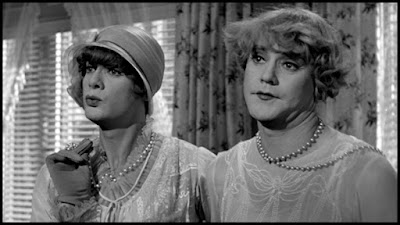 Some Like It Hot is also the perfect farce, and for our purposes here, we will be defining farce as “a romantic comedy that involves mistaken identities and disguise.” Many modern comedies have forgotten how to do farce. Farces depend on all of the disguises and mistaken beliefs to be revealed at the end to form a satisfying climax. Here at F This Movie!, we still poke fun at the awful Adam Sandler movie Just Go With It, which wants with all of its diminished capacity to be a farce, but fails spectacularly by barely trying. In Just Go With It, a single, static scene in a bar replaces that satisfying climax. A mopey Adam Sandler simply tells Jennifer Aniston about all the crazy crap that happened at his wedding the day before. We want to see that shit, Adam. True farce delights in showing, not telling.

Some Like It Hot has so many narrative ends to tie up, so many disguises to be revealed, that it ends like a house on fire. The mobsters discover “those dames ain’t no dames.” Sweet Sue (Joan Shawlee) discovers her saxophonist and bass player are really men, Sugar Kane (Marilyn Monroe) discovers her millionaire isn’t really a millionaire, and Suitor Osgood (Joe E. Brown) is in for the biggest surprise of all. All of these various complications and subplots are tied up neatly in just under eight minutes. This film’s artful climax is something to behold and treasure. 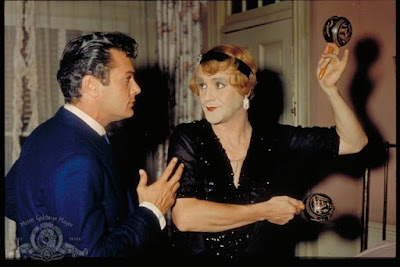 The genius of Billy Wilder was once succinctly summarized in an interview with Jack Lemmon. Discussing his work in Some Like It Hot, Lemmon recalled being directed in the famous hotel room scene where his character tells Curtis’s character all about the night he just had. Lemmon was holding maracas in the scene and Wilder instructed him to shake them vigorously between each line. Lemmon wondered why Wilder was so adamant about it, but upon seeing the finished film in a theater, he realized that Wilder knew that the audience would be laughing so hard and so long at the jokes that the maraca bit was not just amping the humor—it was providing space so the laughter would not step on the next joke. Brilliant.

Marilyn Monroe was notoriously difficult on set. She was going through much misery in her personal life and this led to lateness, not knowing her lines, and endless retakes. Director Billy Wilder told Curtis and Lemmon that they had to be perfect in every take because the minute Monroe got it right, that was the take he was going to use. During the seduction scene aboard the yacht, Monroe kept flubbing a line, which led Tony Curtis to eat almost fifty of the little chicken wings he was supposed to be nibbling during her line. Curtis supposedly told a reporter on set that kissing Monroe was “like kissing Hitler.” With the passage of time, most of the principals softened their views. Curtis denied ever saying the Hitler line, and Billy Wilder mused that any actress could have shown up everyday and known her lines perfectly, but NO ONE ELSE could have given the performance that Marilyn Monroe gave. She is radiant in the film and so funny—funny and sexy is a difficult combination to achieve. 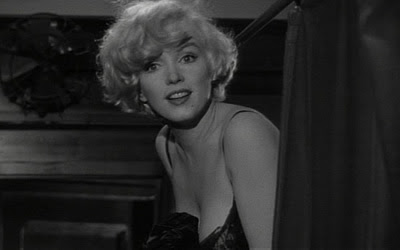 Some Like It Hot’s Three Miracles: A brilliant script by Wilder and frequent co-writer I.A.L. Diamond, full of jokes inside of jokes, callbacks, and asides; the performances of the leads, especially Jack Lemmon, who deserved a Best Actor Oscar for his work as Jerry/Daphne (Charlton Heston won that year for Ben-Hur—it figures!); and what is, without any doubt, the single greatest last line in movie history.