A little story about learning to overcome the big things.

Aristotle once mused that “the whole is greater than the sum of its parts.” Aristotle never watched kung-fu movies, but if he did, first, he’d LOVE them, and second, he’d absolutely agree that his quote applies to 1978’s Crippled Avengers.

Also released by Shaw Brothers Studios under the titles Mortal Combat and Return of the 5 Deadly Venoms, the movie begins with a tragedy befalling the local kung-fu master, To Tin Tao. He comes home to find his wife being murdered and his son’s arms getting cut off above the elbow. Master To avenges his wife’s death, but his bitterness over the harm to his family poisons his outlook on the world. He supplies new, cast-iron arms, complete with hands, to his crippled son, To Chang, and trains the boy in martial arts; they eventually take over the town and submit it to their intolerant, tyrannical rule. 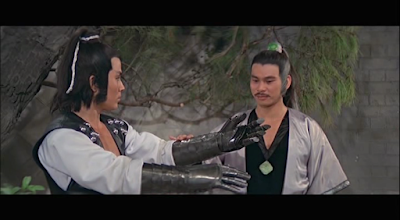 The residents, though fearing both To the elder and the younger, are not content under their harsh regime. The local blacksmith talks loud and long about the harsh authority of Master To and his son, and continues to do so even when they walk into the restaurant where he is airing his grievances. Master To punishes the blacksmith by forcing him to drink a chemical that makes him unable to speak, and then clapping his ears so hard that he can’t hear, rendering him a deaf-mute. A peddler, witnessing what happens to the blacksmith, raises his voice in disapproval of the brutal punishment and is rewarded by To’s son blinding him with his iron hands. The following day, To and his son are walking in the town and a villager accidentally bumps into To, who IMMEDIATELY has his men chop off the man’s lower legs for his clumsiness

As brutal as these punishments are, nothing tops what happens to young martial artist named Wang. Wang comes through town and meets the deaf-mute blacksmith, the blind peddler, and the legless villager, who have now taken up their miserable lot together. He learns of their misfortune, and decides to avenge the three men, but is no match for the combined strength of To’s son and his main henchman. His proper punishment is to have a chain wrapped around his head; it slowly squeezes tighter and tighter until Wang is turned into a physically able but mentally impaired idiot, giggling and laughing at everything like a child.

The now four cripples decide to go to Wang’s former martial arts school after finding the address in Wang’s belongings. Wang’s master, considering their plight, decides to train the cripples so they can avenge what has happened to them, bestowing each man with a fighting style particular to his deficiencies. To the deaf-mute blacksmith, he supplies a small mirror to wear around his neck and reflective surfaces on his wristbands so he can see the opponents around him. The blind peddler fine-tunes his hearing to the point where he can detect a leaf falling through the air. The legless man is equipped with new iron legs, and learns to maximize the power of his kicks. Wang still has the reflexes of a martial artist, so his skills need little refinement; his mental handicap prevents him from learning anything more anyway. Finally prepared after years of training, the crippled men return to the town to exact their revenge on To, and mayhem ensues.

Although it’s a lot of setup, the movie feels like it goes through these expository gears quickly, leading to the considerable amount of action. One of my quibbles with Shaw Brothers movies is that they’re so hit or miss with the obligatory romantic interest for the hero. Crippled Avengers eliminates that arc completely, along with any sort of inward remorse felt by the characters, creating a clean line from beginning to end that’s very black and white about the stakes and which side everyone is on. That sounds superficial, and perhaps it is, but it’s also wildly entertaining in the way that revenge movies with like Taken can be.

The movie also has to zip along because of its attempt to try and give roughly equal time to its multiple protagonists. By my inexact eye test, it feels like the blind peddler (Phillip Kwok) and Wang (Chiang Sheng) probably get more of the screen time, but they clearly have the most acrobatic action as well. There is a five minute, virtually silent sequence where the blind peddler and Wang are battling To’s son that is breathtaking in its sustained action. It’s an example of the action that is typical of the movie: not giant set-pieces, but continuous one-on-one or one-on-a-few skirmishes. This sort of makes sense for a movie made on a relatively low budget, and that also may have wanted to capitalize on the popularity of these actors who had appeared in Five Deadly Venoms just a few months before.

The action after the training comes thick and fast, with Master To hiring his own set of mercenary warriors with their own special gifts to battle the crippled masters. And when the final enemy falls dead at their feet, the crippled avengers turn away as the credits roll. The story began when a man couldn’t handle the maiming done to his family, and this trauma turns him to evil. The ultimate vengeance of the crippled masters here is that they take the same awful trauma of loss and turn it into something good. That’s the power of working together.