Start at the End: Scott Frank's The Lookout 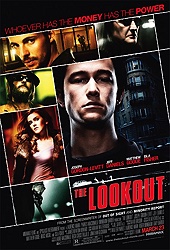 “You can’t tell a story if you don’t know where it’s going.”

Physical trauma and mental illness are often easy crutches in storytelling. They create built-in narrative obstacles and character flaws, but they also tend to replace real dramatic tension and stakes in the larger story. The trauma becomes the story rather than influencing it. It turns real characters into objects of ridicule or plot devices. While these roles aren’t always mean-spirited or necessarily meant to condescend, it’s clear by now that the best way we can support those afflicted is by depicting them as functional human beings with real goals and stories. One film that does it well is Scott Frank’s The Lookout, which not only gives us a capable and intuitive character who has suffered trauma, but asks us to participate in that traumatic experience rather than merely sympathize with it. Joseph Gordon-Levitt plays Chris Pratt (not that one), a former high school hockey star whose career ended after a disastrous bit of reckless driving killed two friends and crippled another. Chris survived, but his injuries left him with a variety of ailments that include memory loss, motor skill deficiencies, and the occasional emotional outburst. Four years later, he’s resigned to the quiet life of an overnight janitor and rooms with Lewis (Jeff Daniels), whose blindness makes them quite the dysfunctional duo. The pair manage things one day at a time and do their best to ignore the attitudes of naysayers. Until One Night, when Chris meets Luvlee Lemons (Isla Fisher), an exotic dancer who recognizes him from his glory days and provides some much-needed attention. But Chris soon discovers that his pelvic victories are actually the brainchild of Gary Spargo (Matthew Goode), an aspiring criminal mastermind who coerces him into helping rob the bank he spends his nights cleaning. Put off by their tactics but tired of being treated like a failure, Chris agrees to help.

The Lookout rests on smart performances from a strong young cast. Joseph Gordon-Levitt plays Chris almost defensively, as a person who wants the best from the world but expects the worst. Years of sympathetic smiles and well-intentioned charity have left him incredibly sheepish and insecure, but there’s also an ambition and optimism to his personality that prevents him from sinking into Mopey Emo Protagonist Guy. Isla Fisher and Matthew Goode are villains by necessity; they’re more lost souls than evil geniuses. Fisher does her usual sexy vamp thing with a layer of sadness that suggests she’s been in the wrong place at the wrong time her entire life. She wishes she could mean what she’s saying, but circumstances just won’t allow it. Goode is charming and dangerous without being overwrought. He’s almost a poser, like he’s imitating his evil older brother. And then there’s Jeff Daniels, who steals nearly every scene he’s in. His Lewis is a lovable cad with a masterful connection to Chris’ demons. A lifetime of blindness has given him exactly the right tools to help his young friend let go of his old routines and start building new ones. It’s a really special performance that Daniels pulls off in spades. 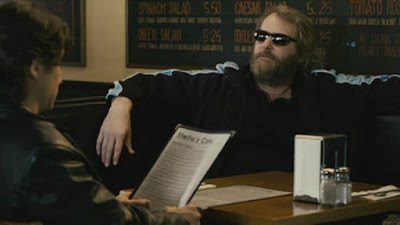 What’s also special about The Lookout is the way it folds Chris’ handicaps into the narrative. His major issue is his inability to sequence; he has trouble with complex tasks because he can’t put steps in the correct order. While it’s not as heavily stylized as something like Memento, Frank leverages it into a story about storytelling itself. Chris is constantly making to-do lists and labeling his apartment with step-by-step instructions for nearly everything. Following recipes and reciting fairy tales are herculean tasks. Lewis encourages Chris to start at the end and work backward, that seeing the goal will help him remember the steps he needs to follow to get there. Over the course of the film, those steps evolve from simply feeding and grooming himself all the way to grand larceny. From an emotional standpoint, that focus on the end goal also allows him to work through his relationship with his parents (Bruce McGill and Alberta Watson), develop his future restauranteering plans with Lewis, and find closure with Kelly (Laura Vandervoort), the girlfriend he injured in his accident. Chris’ eventual heroism is a byproduct of this improved sequencing rather than some kind of moral or ethical turn, which makes it all the more impressive and important.

That isn’t to say there aren’t ethical choices being made. The people in The Lookout are often characterized by their approach to Chris’ handicaps: Friendly characters such as Chris’ sister Alison (Janaya Stephens) and his nighttime guardian Deputy Ted (Sergio Di Zio) offer support without treating Chris like a child. Authority figures like his father and the bank manager Mr. Tuttle (David Huband) never miss an opportunity to remind him that he’s weak and incapable. Chris deals with both extremes in predicable ways, but what make Luvlee and Gary so seductive is the way they remind him that he was once young, free, and powerful. Gary convinces him that he’s better than this crapsack life he’s living, and Luvlee’s sexuality makes him feel that manly sense of Manliness that men like to feel sometimes. Chris finally agrees to help with the bank robbery not because he’s deteriorated into a sociopath, but because these relationships are giving him that sense of efficacy he’d lost for so long. It may be a crime, but it’s something only he can do. These are people who need him. You’d do it, too. 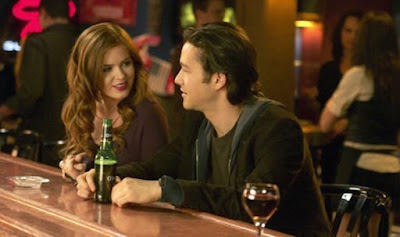 The Lookout sports some good action and brisk direction, but it’s a character piece first. It never turns Chris’ memory loss into a gimmick or sacrifices logical consistency for the sake of spectacle. It doesn’t get too cute or try too hard. It’s a smart and sensitive crime noir that loves its lead and wants us to see the world through his eyes. Best of all, though, is that it treats those afflicted by injuries and handicaps with humanity. Rather than spend a ton of time emphasizing all the ways Chris and Lewis are different than we are, it embraces our similarities. There’s nothing in The Lookout that is outside the realm of “normal” human experience. We’ve all felt powerless; we’ve all felt desperate; we’ve all felt Less Than. The film simply uses these physical traumas as a device to tell the larger story of a broken person learning to become whole again.