“Wait a minute…ah, are you telling me you built a WEREWOLF…out of a TEENAGER?!”

You guys, #ScaryMovieMonth is just days away! September has seemed to last forever for me this year, standing between the summer and October like an uninvited guest who will not leave. It’s a time of monster cereal and pumpkin-spice-flavored toothpaste even though it’s still wicked-hot outside where I live. It’s also a time to prepare thyself and get ready for the horror, THE HORROR, by watching movies that aren’t REALLY horror but are tangentially connected to the macabre. I’ve started watching Tremors and the sequels in preparation for the ghouls of October (not to be confused with the Boys of Summer), and I’ve also revisited an old friend of mine...Teen Wolf.

Let’s be clear: I’m not referring to MTV’s successful horror/drama television show. While I’ve heard good things, I’m smart enough to realize that I’m not the target audience for that show; I keep meaning to give it a shot, but I just never do. No, when I say Teen Wolf, I’m talking about the 1985 comedy starring Alex P. Keaton and Marty McFly himself, Michael J. Fox; his casting in the lead was a bit of a risk because he was an unknown quantity when this movie was made. Family Ties was a success that was gaining momentum, but was built on an ensemble cast. Back to the Future had been filmed, but had not been released yet when this movie still in production. Frankly, no one was sure if Fox was going to be a breakout star who could anchor a picture. But with two feature films being released in theaters that year, 1985 would prove to be a fortuitous year for Michael J. Fox. One of those movies would be a smash hit while the other would not. Can you guess which is which? 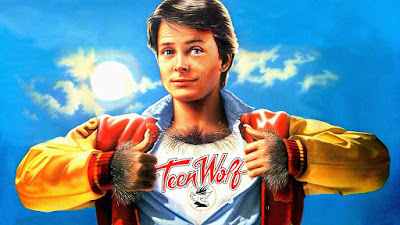 Teen Wolf is an odd movie. It’s constantly at war with itself over tone, often careening from crippled drama to faint comedy with no warning at all. It wants to be a funny teen movie (which was a bankable trend), but I think it also wants to be a “coming-of-age” movie that drops real truth about the youthful condition. To be blunt, it’s not particularly great at either one of these things. And yet…I love Teen Wolf because there’s something about it that’s just so unusual and unexpected. I love it because it’s the story about a teenage boy who discovers that he’s a werewolf (it’s…like...a metaphor, man…because teens are going through so many body changes, you see?) but yet contains no horror, no violence, and no gore whatsoever. It’s also appealing to me because the titular wolf is Michael J. Fox, a man known for his small stature. Instead of turning into a wolf and ravaging everything in sight, Michael J. Fox’s character, Scott, just sort of gets shaggy and becomes really good at basketball.

It seems like this movie is trying to please lots of different people and be something to everybody. It has a monster for a star, teen drama, scatological humor, an important sporting event as its climax, and a misplaced ballad over the closing credits. These disparate elements don’t really belong in the same film, and a better movie would have focused on just one or two of these things. This movie also plays in broad archetypes (the girl next door, the mean popular jock, the sassy best friend), which I can overlook because MOST movies--at least the major studio ones--lay in archetypes and leave things like complex characterization out of the equation. Yet somehow there is a charm to this movie that makes it a perfect candidate for a late Saturday night as the clock creeps closer to midnight. Somehow it’s still an appealing movie. Despite the shortcomings, I always have a blast watching Teen Wolf. Where else (outside of a Jane Austen adaptation) can I see people surfing on top of a van to the music of The Beach Boys? 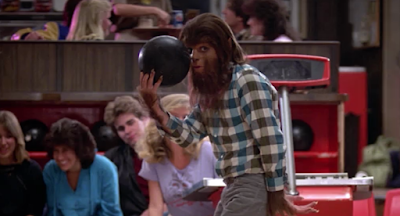 A large part of the appeal of this movie rests on the shoulders of Michael J. Fox. If you like him as an actor and a person, you’re bound to have a soft spot for Teen Wolf because he’s just so much of that thing that he is. There are lots of frowns and exasperated expressions, a lot of hand gestures, and a lot of touching his temple while he says things like “Whoa, this is heavy.” I’ve literally grown up with this movie, so there are certain things that I’ve just taken for granted over the years that only became obvious to me fairly recently. For instance, the ironic casting of Michael J. Fox himself was lost on me when I was younger because to me Fox was as cool as anybody could possibly be. From the “No-duh” files: it was just a few years ago that I realized they most likely cast him against type because he’s so little, not because he’s awesome. They wanted an itty bitty werewolf guy in their movie. They could have cast some other popular young actor at the time, but they went with the small guy. What makes this movie so fun to revisit as a self-aware adult is seeing Michael J. Fox play a monster that is essentially still completely Michael J. Fox. He doesn’t grow nine feet tall. He doesn’t roar like a beast, just howls a little with his own voice. This is why I enjoy the original Teen Wolf so much and why I’m just not all that interested in the new show. I’ve largely lost interest in watching characters posture and pose, and I’m SURE not interested in seeing them smolder. Michael J. Fox is not sexy and he isn’t filled with dark charisma; he’s kind of nerdy, but in a cool way. He’s the rest of us. But a werewolf!

We can also thank the rest of the cast for making the movie unique despite their archetype characters. Actor-turned-TV-director Jerry Levine (Born on the Fourth of July) plays Scott’s nutty friend Stiles (could there be a more ‘80s name for a character?) and wears a t-shirt that delighted me when I was a kid. Susan Ursitti (Zapped!) is the girl next door. Lorie Griffin (Cheerleader Camp) is the girl who gets around. Mark Arnold (Trancers IV and V) plays the rival jock and bully, and James Hampton (every television show in the 1980s) plays Scott’s dorky dad who has a secret of his own. 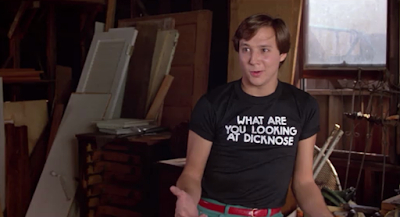 Teen Wolf is the first feature film written by Jeph Loeb (under the name Joseph Loeb III), a man who would spend the next thirty years carving a name for himself in geek culture as the writer of many wonderful comic books and as a producer of plenty of TV shows centered around comic book properties such as Smallville, Daredevil, Jessica Jones, and Luke Cage. He’s also the man who gave us the story for one of Arnold Schwarzenegger’s corniest (and most enjoyable) vehicles with 1985’s Commando, which came out just a couple of months after Teen Wolf. Just as this was Loeb’s first feature film script to get made, it was also director Rod Daniel’s first theatrical film. Daniel came from television work, made a few films in the late 1980s and early 1990s that more often than not featured dogs (he directed K-9 with Jim Belushi and Beethoven’s 2nd) before once again returning to television work for the rest of his career. Maybe that’s why sometimes Teen Wolf feels like a made-for-TV movie.

Urban Legend Alert: for years there has been a rumor that an extra in a crowd scene during the basketball game at the end of the film had his penis out as a joke. It’s been hotly debated (well, as hotly as anyone could debate something related to Teen Wolf) for years, particularly in a pre-DVD era when you couldn’t make out fine details in the backgrounds. There are those who insist that you can clearly tell its his shirt tail. Well, the movie is now in HD, and there is no doubt whatsoever that this guy has his junk out in the scene. It’s as plain as the dick hanging out of his pants nose on his face. 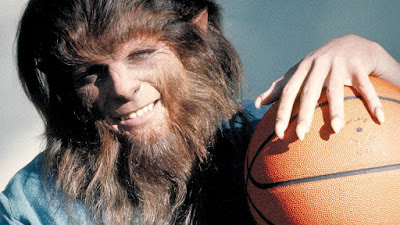 Unfortunately, Teen Wolf was not the smash hit that its creators would have wanted. It both suffered and benefitted from being released a mere month after Back to the Future, which surely had a hand in helping this small-budget movie make back its budget and become a modest success as fans of Marty McFly bought tickets for Teen Wolf to see more of the actor. It was then and remains now the kind of cult classic movie that I find myself championing because of how much fun it is to watch in spite of so many things working against it. On a more positive note, it was successful enough to have launched an animated series that aired on CBS Saturday mornings and had two seasons that ran from 1986 to 1987. There’s even a sequel with Jason Bateman that I’m sure he would prefer no one mention. But that is a story for another time.

While Teen Wolf is now a relic of the 1980s and likely has little to offer a younger generation of movie fans (particularly those who enjoy the more serious, sexy MTV series), it does still hold a certain appeal, especially for enthusiasts of corny 1980s cinema or MJF and his unique acting style. It’s a stylistic and thematic mess filled with clichés and archetypes that relies almost entirely on the performance of its lead actor and the gimmick of a werewolf who isn’t remotely scary. In spite of (or is that because of?) these faults, the movie is eminently watchable in the way that the best trash and exploitation cinema can be, and it’s because of these shortcomings that I love it as much as I do.