Nerds of Every Flavour 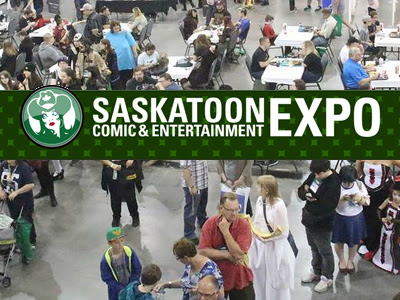 Patronuses flying every which way, epic light saber battles happening while Captain Picard supervises from the bridge, this can only mean one thing: it’s September and Sask Expo is upon us.

Once again, Saskatoon has erupted into a glorious schmozzle of nerds and I am in my element amongst my people. Let’s just draw from all of my loves why don’t you? Carrie Fisher from the Star Wars. Draco Fricken Malfoy from the Harry Potter. Face explosion. What do you do when all of your worlds collide? Leave the squealing “fan-girl” at home, break out the tactical nerd kit that has been collecting dust for the past year, and bring along your A-game to create some life moments.

While in my many wanderings through the expo grounds, I just happened upon Carrie Fisher, out amongst us regular folks, glitter bombing her bodyguards, with her French Bulldog "Gary Fisher" leading the way. In between all of her autograph signings, photo ops and panels, she took the time to come out and see what kind of handmade goodies there were to discover.

I was also set up as an exhibitor selling my nerdy jewellery and accessories and Carrie Fisher stopped at the booth next to ours for a solid fifteen minutes to chat about how she loves attending these smaller expos (this year's Sask Expo drew in 15,000 people), primarily for the opportunity to browse through all the handcrafted items created by fans. (As opposed to all the "officially licensed" goods churned out in masses). She then noticed the crocheted Princess Leia cap, popped it on her head, posed for a couple photos and was off to surprise another unsuspecting vendor. 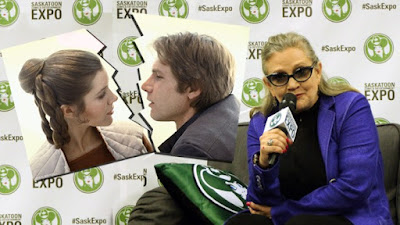 Huh. Princess Leia, amongst us commoners, rooting for the little people. This was not how I envisioned my meeting with the actress who portrayed one of the most iconic characters in film history to go. Mind blown.

Her panel was exciting and opened up a tiny glimpse into her and Han's relationship and why it might have ended. "Too much smuggling...Ladies smuggling is bad." And you would think that all that time in hyperspace would get boring after awhile, but "...No. No it doesn't, we have robots for that." Heh. Princess Leia, you sassy lady.

Later on, a couple of my girlfriends and I had a photo op booked with her, and we had it all planned out. Screaming happy signs to be held, overly excited faces to be shown and we were going to ask Carrie Fisher if she wouldn't mind looking a little bored in the picture. It's all about the contrasts is it not? Well, she one upped us and said, "Why don't I just have a little nap on your shoulder?" Perfection. 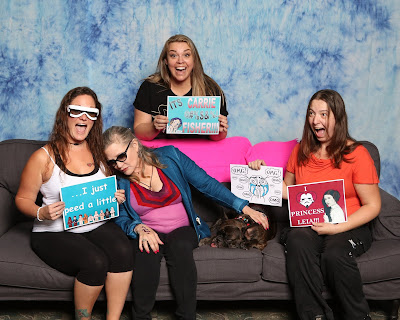 Harry Potter and I have this thing. Not the person, but the lifestyle. The books were a magical sanctuary for me when I was living abroad, and the films are the complement to my overactive reading imagination. As with all things in life, I love to expand on the things that I am passionate about and my creative juices led me to making all this Harry Potter-inspired jewelry. When I say that this entire weekend was a life highlight, it is far from an exaggeration; I got to dress up (in what I believe to be a very funny costume), speak the nerd for two full days, meet some incredible actors, accessorize nerds in my creations and fall in love with Draco Malfoy.

Well, while the character is just a little jerk that has been bullied by his dick dad his whole life (and could probably just use a hug), the actor bringing Malfoy to life is the incredibly down to earth and genuinely nice guy, Tom Felton. I have met many an actor and musician over the years, but due to my all-encompassing love of all things Harry Potter, meeting him via photo op was an opportunity I would not pass up. Donning my Hermoine-post-polyjuice-potion get-up, I stood in line and weaved through the cattle lines. In a flash he grabbed my wand from me, sending a curse straight to my heart and the ensuing hi-5 for my great costume stirred my stowaya inner-fan girl from my robes and the resulting smile on my face has not disappeared since. Ugh. Such a girl. 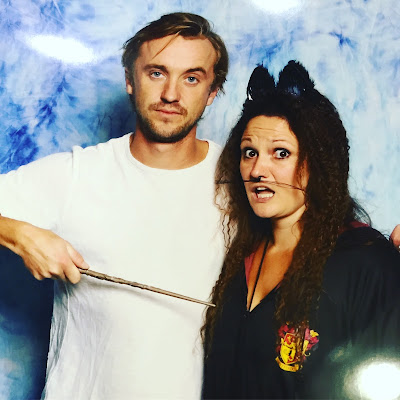 Not surprisingly, his panel consisted primarily of us bombarding him with questions about his character and the series in general. I've narrowed it down to my two favourite moments (primarily to spare you my tendency to gush all things Potter-y). Moment the first: an eleven-year old girl asking why she hadn't received her Hogwarts letter yet and his response that the Sask Expo was just a ruse so that he could deliver it to her personally. And moment the two: when asked if he had a crush on anyone during filming, he asked if it was wrong to have a crush on your aunt? Heh. Because who doesn't love Helena Bonham Carter? His responses were deep and meaningful and gave us all a personal glimpse into growing up as a character in one of a generation's most beloved worlds.

Favourite words to come of my mouth this weekend: "I think I see Gryffindor colours past the Sasquatch on the right."

Sask Expo: The place where all levels of nerds are winning their respective games of life.
Posted by Patrick Bromley at 5:00 AM