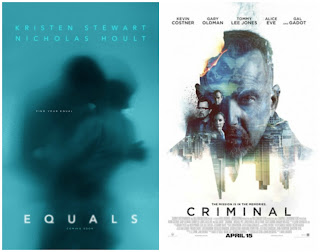 They were sold out of Keanu.

“We’re going to live every day remembering, and we’re not going to feel it.”

One day, we’re all going to look back at Kristen Stewart’s career and see it for the elaborate science experiment that it really was. Her Oscar acceptance speech will breed a thousand thinkpieces on the weird and winding road that took her from Twilight to whatever wins Best Picture in 2021, and we’ll eventually come to agree that Equals was the moment she started openly screwing with us. Why else would a talented-if-much-maligned actress famous for her obstinate stares and cold deliveries choose to portray a utopian worker bee struggling to feel genuine emotion? Is this some kind of meta commentary on us, a giant middle finger to a smug intelligentsia that keeps insisting she smile more? She’s very good in Equals. She might, in fact, be the only good thing in Equals, a film that desperately tries to ride the recent wave of sensual and introspective science fiction projects like Her and Ex Machina only to drop like a goddamn stone. A great, big, dull thud, this one.

In The Future, an in-utero process known as gene silencing has wrangled the boundless existential chaos of humanity and left behind cold, emotionless drones who perform useful tasks for The Collective. There is no coupling. Not even once. Those who succumb to the trace tingles and tugs the process leaves behind are diagnosed with “switched-on syndrome (S.O.S.)” and sent for reconditioning and containment before eventual, unavoidable death. Silas (Nicholas Hoult) and Nia (Stewart) are among the newly-and-secretly-tingling who meet up in bathroom stalls for some light petting after hours. Nia is a Hider, a person living with symptoms of The Bug and avoiding treatment at all costs. Feeling feels good, don’t ‘cha know, and when the two cross paths with sympathetic state employees Jonas and Bess (Guy Pearce and Jacki Weaver), they decide to hightail it toward The Peninsula, a wasteland that The Collective conceded to less-enlightened savages long ago. As you might imagine, complications arise: The Cure (not that one) has arrived to turn S.O.S. into another relic of the past, and the clock is ticking for the young lovers to put up or shut up before it’s too late. 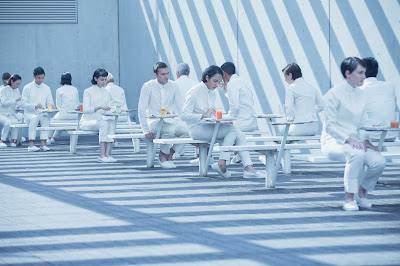 There’s a simplistic naivety to Equals that almost makes it endearing and watchable, as if the filmmakers had just seen THX 1138 for the first time and decided to try their hands at the whole science fiction thing. The landscapes and costume designs are stark and uniform. Exposition Computers fill us in on where we are and how we got here. Lights are gelled and focus is racked in moments of Maximum Conflict and Turmoil. But to what end? It all just sort of sits there, staring back at us. The few instances of depth and thematic resonance that exist at all are immediately lampshaded and spoon-fed back to the audience for processing: there’s a moment in which Nia traps a bumblebee (a bug, because symbolism) and she tells the others that it flies because it wants to, aerodynamics be damned. The characters do that same thing a few minutes later. In another scene, we see Silas and Nia working on “speculative non-fiction,” and it’s implied that these stories of deep-space exploration are designed to entertain a populace forbidden from looking inside themselves for answers to life’s questions. Later, Silas explains all that to the audience. Maybe we should just leave Equals alone. It doesn’t seem to want us here at all. 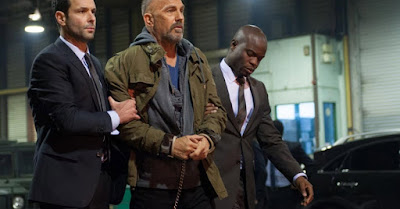 It’s a weird time for Hollywood Tough Guys. Cannon heroes like Norris and Bronson go through far too much ammunition for modern sensibilities, and Dirty Harry wouldn’t be caught dead protecting a bunch of hand-holding, spoiler-warning, lady-electing pussies like us. Even Schwarzenegger and Stallone have settled into their Inspirational Mentor periods. We’re relying more on bruised and self-conscious heroes like Bryan Mills and John Wick, sympathetic family men who count every bullet and consider every alternative. Mainstream action is a bit more nuanced, a bit more politically-aware. Trends like these are cyclical, of course, but they still leave blunt-instrument-with-a-rage-boner stories like Criminal in a weird position. It feels like a film out of time, like a '90s techno-thriller script that was diluted and neutered into something palatable for 2016. Old Kevin Costner playing a muscle-bound ass-kicker who switches brains with Ryan Reynolds sounds like a good time. It really, really does. But Criminal plays it safe when it should let loose and might be too dumb to know how fun dumb can be.

A cyberterrorist known as The Dutchman (Michael Pitt) has hacked the command and control systems of the world’s nuclear arsenal with the help of anarchist Xavier Heimdahl (Jordi Mollá), who intends to bring about total societal collapse. The Dutchman, however, has had a change of heart. He arranges to hand the codes over to Ryan Reynolds’ CIA agent Bill Pope (his name is seriously Bill Pope), who moves him to a London safehouse before being captured and killed by Heimdahl’s men. Pope’s boss Quaker Wells (Gary Oldman) doesn’t know where The Dutchman is hiding, but he has to find him before Heimdahl does. He enlists the help of Dr. Micah Franks (Sad Tommy Lee Jones), whose experimental memory-swapping surgery will move Pope’s knowledge into a brain with sufficient “empty space.” That brain belongs to sociopathic killer Jericho Stewart (Costner), whose damaged frontal lobe makes him the perfect candidate for the procedure. Stewart immediately escapes and moves to steal The Dutchman’s ransom money using Pope’s leftover memories. But those memories come with emotions that Stewart’s never felt before, including love for Pope’s wife and daughter (Gal Gadot and Lara Decaro). A few heel-face turns later, Stewart is tracking The Dutchman and saving the world. 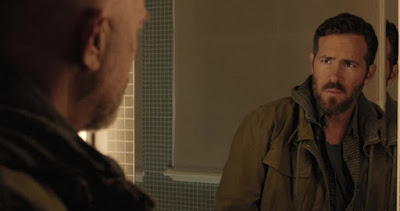 There’s a staggering disconnect between the film Criminal wants to be and the film it actually is. With a few tweaks, it could have reached Face/Off levels of absurdity and fun, but there just isn’t enough melodrama to bring it all together. Since none of the characters are connected in any real way, the preposterously-overqualified actors spend most of their time in their own movies, shouting or crying in medium close-up. With a stray exception or two, the action isn’t staged well enough to be exciting or over-the-top enough to be goofy. Poor Gal Gadot is given some of the worst lines of her career. Alice Eve and Scott Adkins’ parts are blink-and-you’ll-miss-them. Of course, none of this matters if a roided-up Kevin Costner is kicking ass, but he just isn’t. He mostly just grunts and steals people’s sandwiches. It’s the kind of Tortured Loner part that starts out interesting but lacks the pathos for a real arc. Still, Criminal has moments of audacity (of Do For It-ness, if you will) that make it feel like there’s a cut somewhere with more violence and more room for Costner to explore the role. It’s hard to believe that a cast this good was duped into the DTV-quality film Criminal became, so one can only hope that the cutting room floor is littered with footage of Tommy Lee Jones scowling while Kevin Costner cracks skulls and makes sweet, tender love to Gal Gadot.
Posted by Patrick Bromley at 5:00 AM