The Fly and The Feelings 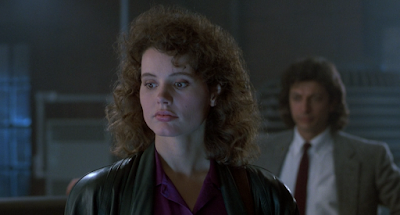 I’d probably date a fly, but I draw the line at assholes like Seth Brundle.

“I love you,” he says. The air catches in my throat, feeling suddenly thick and leaden. It’s our third date...I look across the table, panic washing over me. It’s that same visceral panic that burbles from deep inside your chest upon discovering the food left in a neglected tupperware has transformed into something other—green, fuzzy, repulsive—turning hunger into nausea mixed with a vague sense of betrayal. Logically, I didn’t see him again, instead opting for quietly blocking his number and pretending the date never happened.

Sadly I didn’t have the opportunity to date in 1986 (even my parents weren’t yet together) but my supposition is that the idea of a “red flag” didn’t spontaneously arrive with the advent of Tinder, OkCupid!, and Whatever Other Dating Innovation You’re Into. I’d say it was probably a lot easier in 1986 to avoid a redflag-lover -- just like break your pager or something...right? So it’s for these reasons that, for me, beyond integrated genes, superhuman vomit, and the idea of losing humanity itself, the most disconcerting piece of David Cronenberg’s 1986 remake of The Fly is how Geena Davis’ character, Veronica Quaife, seems totally on board with the red flag factory that Seth Brundle has cooked up in his lab. Be afraid, Ronnie, be very, very afraid. 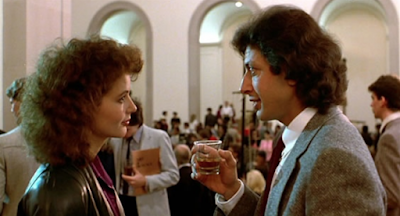 Thirty years prior, when marriage was a bit more of a cultural concern, the original The Fly was born. Not from the sickening practical effect slime of David Cronenberg’s maternity ward, but instead of the upper crust marriage of Andre (David Hedison) and Helene Delambre (Patricia Owens). Unlike the second The Fly, the first doesn’t rely on insects having a high sex drive or a penchant for vomiting on baked goods; instead it prepares a more fertile ground. With a sensitive approach to talking about love and what romantic partners are willing—and capable—of doing for one another, much more of the yuck-fest implicit in sharing your body with a bug is hidden under wraps. Instead we’re faced with the very sad truth of seeing two people in love digest and come to terms with the impossibility of their relationship. Opening with Andre’s mysterious death, we soon gather that Helene Delambre has killed her husband with a machine press. Vincent Price, being the sleek, stylish, nosy thing that he is, presses the recent widow for the full scoop of why she killed his brother and thus begins their story.

Flashing back in time, we meet Andre Delambre, a man who loves scientific discovery almost as much as he loves his family. Although we know we’re meant to witness some mind blowing experimentation, the film is paced in such a way where we get to really know the Delambre’s and how much they love one another. The whole Man Turns Into a Fly business serves only as a punchline to bolster a more tender, complex love story. The simplicity and pureness of their relationship isn’t necessarily contrasted by what goes on in Andre’s lab, rather it’s made all the more potent. Helene is faced with an impossible task: she must harm the body of her husband to preserve the quality of his life and protect the world from a potentially terrifying invention. I appreciate how well she’s written despite the societal norms of the time. She struggles, makes compromises, and cares for her husband despite his transformation and the literal disappearance of his humanity. 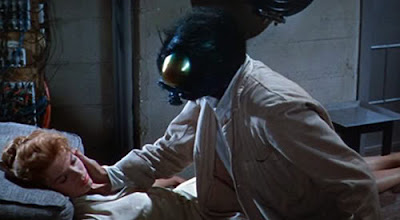 I’m not one to shit on anyone’s love fest. In fact, I feel personally slighted that throwbacks to the Goldblum/Davis union don’t festoon every cover of every magazine ever published. But Cronenberg’s version of The Fly is a lot more like watching two kids make-out in the hallway in front of your locker than anything with which we’re meant to emotionally connect. You don’t really want to interrupt them, you kind of want to watch, seeing the mechanics of their midday rendezvous is pretty cool, but it’s also pretty gross. There’s not enough of a transformation happening in this iteration for it to be more than a gross-out flick. From the moment Brundle lands on Quiafe in the opening scenes, he’s kind of an annoying pestilence. There’s nothing for us to hang on to in terms of a humanity he’d potentially be losing. Sure, he’s quirky and cute and his performance is undeniably terrific, but as far as a character I’m rooting for, the writing swings and misses.

Cronenberg will always have a very special, strange place in my heart, and I think The Fly is a great movie that I’m never upset to revisit. But this is a game of comparisons and the issue is that while the 1986 film does a phenomenal job of making the viewers feel icky and look away, it would have so much more of a long-lasting impression if there was some emotional hook to Seth’s mutation. For Andre, he not only becomes a fly, but also a noble superhero-type. He wants to preserve the safety of his family, he knows as the transformation continues, he’ll no longer be able to control the violent outbursts of his fly-half. He shows us the gravity of his telepods getting into the wrong hands in such a minimal, yet strong way. Seth begins as a self absorbed, fast talking, insect-like man, and then dies that way. I can’t believe in Ronnie’s love for him (beyond perhaps his ability in The Sack) and never is there even a blip of a moment that makes me want Seth to be okay. I found myself wanting to smack Ronnie and tell her to get her shit together, run away, and leave Brundle. 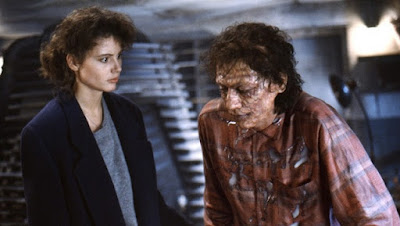 The trajectory of the 1986 The Fly speaks a lot more to man’s greed and irresponsibility than human error or coming to terms with change. While that is still an interesting truth, I think the later version could have borrowed a bit more from one of 1958...if not for anything beyond adding a bit more of a statement to the tale. Again, I cannot stress enough that I DO love the Cronenberg version, but after spending time with the original, I can’t help but criticize the remake. It feels ambivalent to what it’s ultimately saying, due in large part to the characters not having enough time to marinate with one another nor the audience. In terms of a narrative, a lot of the beats seem to come out of nowhere, making the movie very fun, for sure, but not one that leaves us with anything beyond a good time. Even in his last moments of life, Brundle remains a character I cannot identify with in the slightest. As he’s losing his grip on humanity (physically and emotionally) he tries to make his dream of merging with Veronica a reality. Had it not been for Stathis Boran (a character who deserved much more shine in this film), Seth would have succeeded. Instead, he merges further with the hardware of one of his telepods and, as the last push from his human side, puts the barrel of a gun to his head. This is the moment that could have made the movie had it only had more time. While the original is cheesy as hell, we see Andre’s struggle, and therefore miss the part of him that was once human. It’s simple, its flaw perhaps being too clean and resting its laurels on a one-liner at the end.

Being no stranger to men turning into insects, a lot of my interest in both of these films stems from a love of Franz Kafka’s The Metamorphosis. Less preoccupied with working out the scientific mechanics, Kafka focuses on his sparse set of characters through the lens of very real human emotion. While the story is totally absurd, sickening, and even alienating, it still frames the change as one that puts shifting identity, feelings of loss, and testing the limits of unconditional love on the surface—making the whole story one we can understand despite lack of experience in the whole changing-into-an-insect department. Again, this is what 1986’s The Fly fails to do and what the 1958 version is closer to accomplishing. Seth Brundle’s transformation is physically epic, and visually stunning, but its lack of emotion and contrast dilutes the point, for me. There is merit in visceral gross-out, and no one does it quite like Cronenberg, but this is a rare moment where I wish he would have indulged less in the physicality of the movie and more in the nuances of Seth and Ronnie’s partnership.