Whiplash: There is No Try 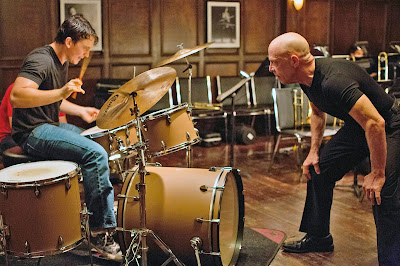 “I was there to push people beyond what's expected of them. I believe that's an absolute necessity.”

The internet is full of inspiring quotations about working hard and being great. Most are vague platitudes, hyperbolic bumper sticker phrases meant to sound profound without saying anything too complicated. They reinforce the idea that our True Callings are the things that come the most naturally and make us feel the best about ourselves. Learning is supposed to be fun, after all, and an even temper paired with some positive reinforcement leads to a healthy balance between work and life. John and Jane Normal would be the first to agree. They wouldn’t like the world that writer/director Damien Chazelle builds in Whiplash. They wouldn’t like characters who obsess over the smallest details of their work and bleed buckets in the pursuit of something greater. They wouldn’t like the kind of competition that rewards emotional manipulation bordering on psychological warfare. But that’s why they’ll never be great. That’s why they’ll never create anything lasting or inspirational. Whiplash is not for the Normals, but rather for those looking to break boundaries and build legacies. It’s torturous, abusive work with very few tangible rewards. For the select few looking to rise above Normal, however, it’s the only thing worth living for. 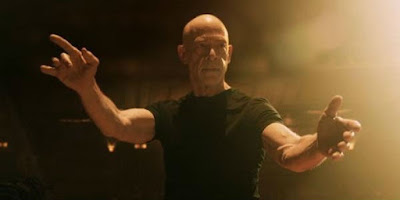 Andrew Neimann (Miles Teller) is a kid with a dream: be the best jazz drummer who ever was. He gets accepted to Shaffer, the country’s premier music conservatory, and starts his first year in earnest. It’s not long before Head Bald Guy in Charge Terence Fletcher (J.K. Simmons) notices the natural talent grinding away in the JV squad and invites him to the top-tier Studio Band. This is Andrew’s opportunity to watch and learn from the best, to really show off his stuff. He stretches, preps his charts, and looks up with awe at his new musical messiah. But Fletcher isn’t here to be loved. Loving Fletcher won’t make Andrew a great drummer, at least not the way a folding chair to the head will. Fletcher’s cruel, abusive, and violent tutelage keeps Andrew and the others on their toes. He makes them play until they can’t feel their limbs and then berates them for their failures. A few of them switch their majors just to save their lives. But not Andrew. Andrew can take it, and he soon learns to give it back in kind. Unstoppable Force, meet Immovable Object.

It’s easy to look at Whiplash and see Fletcher as the enemy, as a corruptive force that strips Andrew of his self-confidence and destroys his life-long dream of percussive supremacy. He’s constantly luring the kid into a false sense of security and then using that weakness against him. He compares him to Buddy Rich one minute and dismisses him as an amateur the next. He calls his father (Paul Reiser) a failure and makes fun of his absentee mother. He sabotages his equipment and deliberately rallies the other band members against him. It can be difficult for an audience to understand why a person who’s dedicated his life to shaping and supporting young talents would be so barbaric to the best among them. But Fletcher doesn’t care whether or not anyone understands. It’s not about being liked by a bunch of Normals; it’s about the Art. He’s there to root out weakness and inspire perseverance. How will coddling and empty encouragement benefit a kid who already knows he’s good? This isn’t Nerf Mode. It’s not important that everyone gets a trophy and a pat on the back. This is about the next Charlie Parker, and the next Charlie Parker would never be discouraged. 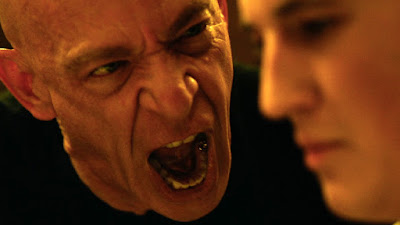 What’s more, Andrew knows it. The longer Whiplash goes on, the more he rails against the painfully unremarkable people in his life: his father is an unsuccessful writer who ended up a teacher. His girlfriend Nicole (Melissa Benoist) is an Undecided who drifts along without a compass. They both lack inspiration and purpose, and Andrew will never be sated by their love or approval. Consider the brilliant dinner scene with his family: he’s feeling pretty cocky at this point, having just been made a permanent core (or so he thinks). He dismisses his cousins’ accomplishments and belittles them for playing Division III football. They have friends and hobbies, sure. They’re popular and happy. They’ve reached peak Normal, so hooray for them. Andrew is a total asshole in this scene, but it signifies how much of his yet-unrealized potential is finally coming out. Maybe this is Fletcher’s evil influence, we think. Maybe this brutal taskmaster has corrupted another innocent. But this is who Andrew has always been, and Fletcher just happens to be the only one who shares his single-minded addiction to the craft. He’s not a teacher, a father figure, or a role model. He’s the competition.

Of course, Fletcher faces competition of his own. He’s heartbroken to learn that a former student has committed suicide after their time together brought on severe depression. His sadness is genuine, for sure, but what’s worse is the feeling that a potential Great One got discouraged enough to give up. He resolves to keep plugging away and pushes Andrew even harder, threatening him with an understudy and then booting him from the band for being late to a performance. Note that neither Andrew nor Fletcher ever acknowledges the car accident Andrew was in. Note that even after he testifies against him and gets him fired, Andrew never believes that Fletcher was in the wrong. “He didn’t do anything,” he insists. They are both firmly in service of a much greater purpose than this business the Normals trouble themselves with. Still, he sells his soul for petty revenge and pays the price with his kit. Fletcher hits the pro music circuit and the two eventually meet up to drown their respective sorrows in the jazz bar. This feels like a cathartic moment, one of atonement and reconciliation, but it isn’t. It’s merely setting the stage for the final showdown. 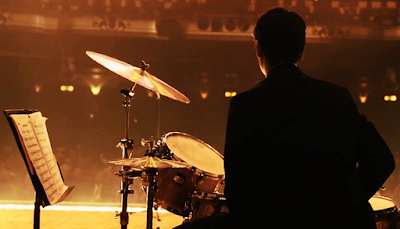 It’s here that Whiplash really comes together. The audience assumes that Andrew will pay back his debt to Fletcher and remember why he loves jazz in the first place. We assume that Fletcher will be kind and encouraging, learning from his previous mistakes and finally seeing the good in his young friend. But again, Whiplash doesn’t care about us. This is a grudge match. Fletcher reveals that he knows Andrew is the one who got him fired. His generous invitation to sit in on a pro gig was actually a giant middle finger and an opportunity to embarrass the kid in public. It’s Fletcher’s final test, but Andrew is ready for it. He steals away the band and the show by launching into John Wasson’s “Caravan” himself. Note that the film takes special care to track Fletcher’s conversion from bitter anger to wide-eyed realization. The shots get tighter, quicker, more visceral: this is the culmination of his entire career. He’s found his Charlie Parker, his Buddy Rich. Andrew is the one who never got discouraged. All that torture and heartache and doubt led to something beautiful that Normals like us won’t ever comprehend. Imagine if Fletcher had ended that first lesson with a “good job” and called it a night. Doesn’t this feel better?