Glutton for Punishment: The Invisible Monster

We are all interested in bad movies, inexcusable cinema, and stinky pictures, for that is the stuff we use to fill the empty spaces in our Saturday afternoons. You are interested in the unknown, the mysterious, and the invisible—that is why you are here. And now, for the first time, we are bringing to you the full story of some of the worst movies ever made. The absurdly low budgets, the interminable running times, the endless fistfights—my friend, we cannot keep these a secret any longer. Let us punish the guilty. Let us reward the innocent. Remember, my friends: terrible movies such as these will affect you in the future! 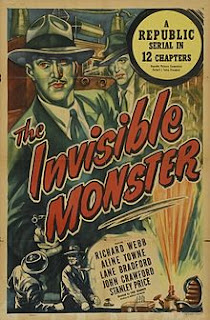 I was surprised when Olive Films announced last year that they were releasing this Republic serial in Hi-Def. The Invisible Monster was released in 1950 when the popularity of Republic’s productions was sliding, and the popularity of the serial was being eroded by series television. Olive’s decision to make this the first serial to be released on Blu-ray is curious, to say the least.

Serials were aimed at pre-teen boys. A new chapter was shown each week before the main feature (along with a cartoon, newsreel, and sometimes a short subject, such as a Three Stooges two-reeler). Every chapter would end with our heroes caught in a last-minute “cliffhanger,” prompting kids to return the next week to see how it all came out. Serials enjoyed a renewed popularity during the early days of VHS and laserdisc, perhaps because many of the original serials were by then in the public domain and cost the video companies next to nothing to release. Eventually, every original serial fan must have died. Although I’m not sure there were many original The Invisible Monster fans in the first place. 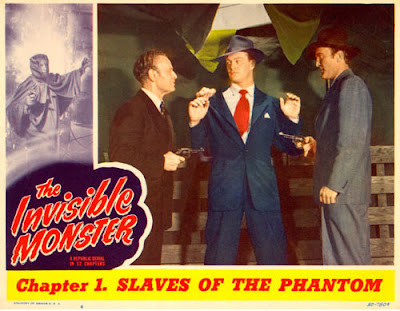 The Plot in Brief: A dime-store despot, The Phantom Ruler (Stanley Price), develops a formula that will render any object invisible when exposed to a special light. Covered in formula-drenched clothing and with his two henchmen at the switch of his “invisibility spotlight,” he is, for some intents and purposes, invisible. He is not a monster in any accepted sense of the word. He is merely grouchy, quick to anger, demanding, and egotistical, but I guess The Invisible Douche Nozzle would have been an unacceptable movie title in 1950.

The Hardly-a-Phantom Ruler’s biggest problem is that he wants to build an “invisible super army” (Who doesn’t?) but he lacks start-up funds, so he goes about getting monies in the most roundabout way imaginable: He kidnaps four noted international scientists and threatens to return them to their war-torn homelands if they don’t secretly infiltrate businesses he later plans to rob while wearing his homemade invisibility cloak so that he can have enough materials to make more invisibility cloaks to outfit an army with no stated mission. 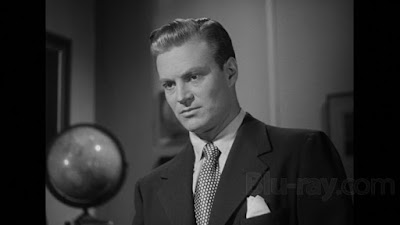 After the first, needlessly complex robbery, insurance investigator Lane Carson (Richard Webb) joins forces with police detective Carol Richards (Aline Towne) to solve the crime and find the money. They earnestly gather clues and foil some ancillary crimes for a few episodes, and eventually discover the special invisibility plot. Egads—the gang is taking orders from an “invisible monster!” Though nobody actually calls him that, and he is only invisible when he is wearing his special Snuggie and bathed in his special light. Fistfights aplenty follow.

I have to give The Invisible Monster credit for squeezing in so much “action” for the little boys in the audience, and by “action,” I mean “punching.” Every episode sees Lane getting into multiple fistfights with the Phantom Ruler’s underlings. Unlike most twelve-year olds, I quickly tire of this “Rock ‘Em, Sock ‘Em” nonsense. One could easily devise a drinking game based on “Hothead Lane” Carson’s penchant for punching first and asking questions later. Take a drink whenever Lane punches first, and they will be pumping your stomach by Episode Four. The audience begins to suspect that Carson only became an insurance investigator as an excuse to start his own personal, on-the-job version of Fight Club. 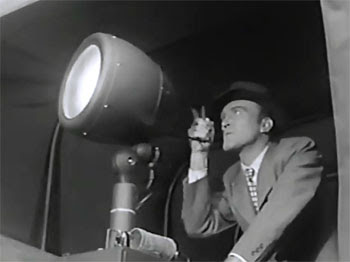 The craziest part involves the specifics of invisibility. The Phantom Ruler outfits a truck with a generator and a spotlight to become invisible—a trope that allows viewers to track the invisible villain by following the spotlight. But the PR needs to spray his clothes with the special stuff, and he needs to stay in the special light, which means he can’t be invisible when he’s actually INSIDE the place he’s robbing, and when he is invisible, he’s being constantly followed by the generator rig—as if no one would notice that giant, noisy truck running a spotlight along the outside walls of a bank.

The Invisible Monster is a clearly a lesser film that lacks the style and substance of earlier Republic serials. There is no mystery about the villain; within minutes of Episode One, bad guy Stanley Price takes off his disguise. I wrongly predicted that his identity would remain a surprise, and that it would only be revealed in Episode Twelve. Price is being forced to play a singularly annoying genius whose only super power seems to be his delusions of grandeur. As sad a bad guy as I have ever seen, the Phantom Ruler can’t even hire more than two henchmen at a time, yet he plans to take over the world. His crazy Kickstarter Campaign is comprised of capes covered in goo, illuminated with a beam that is obviously a 1950s car headlight attached to an old tripod. 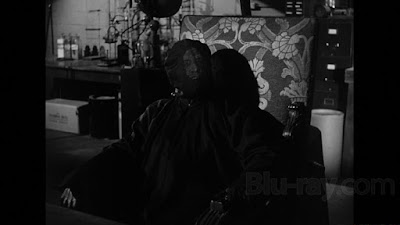 I was also impressed by the image quality of this disc. This is a secondary title that is more than 60 years old, and Olive Films has brought us a clear, sharp image with great contrast—except for some of the stock footage that announces itself with its poorer image quality. Having lived through the era (era) of indifferent VHS transfers of public domain films, the results that Kino-Lorber, Shout! Factory, Olive Films, Arrow, and the Criterion Collections provide us on a seemingly weekly basis is nothing short of amazing. I am glad that I lived long enough to see all of these delicious transfers. On the other hand, I cannot imagine living long enough to ever screen The Invisible Monster again. Maybe when I’m feeling punchy.

My friend, you have now read this column, based on my own sworn testimony. Can you prove that this monster isn’t invisible? Perhaps on your way home, the Phantom Ruler will pass you in the dark, and you will know it because there is that truck with that big spotlight thing following him. Many scientists believe that bad movies are being filmed at this very moment. We once laughed at the Phantom Ruler, but now he is going to make us PAY by forcing us to WATCH this whole serial. God help us in the future.