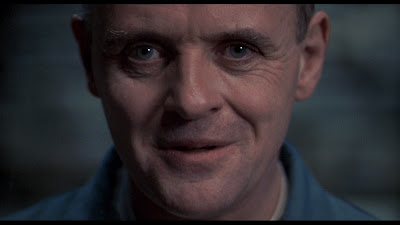 This #ScaryMovieMonth, have an old friend for dinner.

The Silence of the Lambs is a masterpiece. It’s a precise and exacting story about identity and fear, about humanity and transformation. While it’s hard to believe that any one performance in this all-timer of a cast could rise above the rest, we all know that one did: Anthony Hopkins as the cannibalistic psychiatrist Dr. Hannibal Lecter. It’s difficult to pin down exactly what draws us to a character like Lecter. Maybe his brilliance gives his lethality a bit of an artisan touch. He almost elevates torture and cannibalism, after all, as if they’re products of a righteous rebellion against the status quo. His is an extreme approach to social frustration; he famously prefers to “eat the rude,” making the psychotic murdering rampage thing more of a public service than anything else. But the real appeal is his ability to cut to the heart of what’s inside of us. We all wish we could sit on the other side of that glass and gain some special insight into who we really are and what we really fear. Across Thomas Harris’ four novels, the five films based on them, and a hit television series, Hannibal Lecter has spoken to that tiny part of our psyche that wonders what we might become if we just let it all go and embrace the dark side. Since Silence is well-worn territory, let’s take a look at the other films in the Hannibal Lecter Cinematic Universe:

“The reason you caught me, Will, is we’re just alike.” 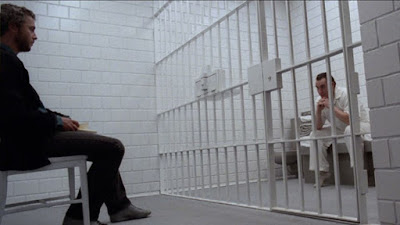 Retroactively billed as “the original Hannibal Lecter story” since 1991, Manhunter is the first film adaptation of Thomas Harris’ Red Dragon. Years after apprehending Dr. Hannibal Lecktor, retired FBI criminal profiler Will Graham (William Petersen) is forced back into action to help bring down a new mass murderer. Though he knows going back to work puts himself and his family in danger, Will still can’t reconcile the normal man on the outside with the serial killer within. He can’t help but think like Francis Dolarhyde (Tom Noonan), who murders happy families as part of his “transformation” into a higher state of existence. Starved for leads, Graham consults Lecktor (played here by Brian Cox, and yes, the spelling is accurate) for his professional opinion. Lecktor plays along only insofar as he can get his revenge on the man who put him behind bars for the rest of his life: he gives Dolarhyde Will’s address and encourages him to take action. Dolarhyde, meanwhile, is frustrated by his love for blind co-worker Reba (Joan Allen); she can’t see any of the things he hates about himself, and so he must decide whether to remain a human being or ascend into a monster.

A Michael Mann production through and through, Manhunter is a strong, loud, angular movie about masculine power. Mann’s 80’s aesthetic (think Miami Vice) colors everything: the lights are bright, the suits are loud, and the music is synth and fierce. By far the least grotesque and violent entry in the series, there are times when Manhunter is almost completely still, moments when it wants us to soak in the composition and music rather than worry about the plot or action. “Just watch these men grit their teeth into mirrors and feel the damn drama,” it seems to say. It’s certainly dated (William Petersen’s performance only works if you accept the film in the context of 1986), but it remains a considerable artifact of a specific place and time in filmmaking. Cox plays Lecktor more flippant and chummy than Hopkins eventually would, not quite so detached or erudite. Much of the character’s backstory has been stripped from this version, and it’s unlikely that Cox’s performance would fit the tone of the later films, but he’s a good actor and it’s a good role. So while Manhunter remains the stylistic outlier in the Lecter series, it does show us how Harris’ characters look through the eyes of a singular and interesting filmmaker. That’s worth something.

“I need to come out of retirement and return to public life.” 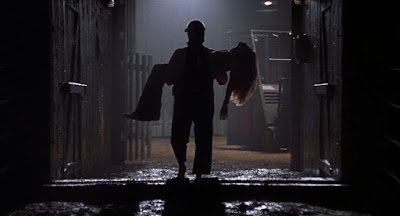 After a botched drug raid costs a fellow officer his life, Special Agent Clarice Starling (Julianne Moore) faces potentially career-ending discipline from the FBI. Though she was in the right all along (her orders to stand down were ignored), it’s the Bureau’s misaligned priorities that bother her far more than her own unfair prosecution. Once again, we find our Clarice the only girl in a big, bad, Boy’s Club, this time headed up by corrupt Justice Department suit Paul Krendler (Ray Liotta). Krendler is in the pocket of Mason Verger (Gary Oldman), reclusive billionaire and Hannibal Lecter’s only surviving victim. By pulling the right strings on Krendler and Starling, Verger hopes to bring Lecter out of retirement to face retribution. Meanwhile, we catch up with the good doctor in Florence, where the crooked Inspector Rinaldo Pazzi (Giancarlo Giannini) has recognized Lecter and plots to collect Verger’s hefty ransom for himself. Let the cat and mouse game begin.

Hannibal is an ambitious and messy film, cartoonish at times and dour at others. The screenplay (by David Mamet (!) and Steve Zaillian) doubles down on the gothic theatricality, which Ridley Scott then directs into a blurry watercolor of blood and lust. It’s almost to the film’s credit that Jodie Foster declined to return to her famous role; whereas Foster’s impeccable physicality conveyed young Starling’s ambition and naivety, Julianne Moore plays her hardened and frustrated, like a scabbed-over wound. Hopkins, on the other hand, is finally able to let his freak flag fly. He chops up entrails and splits open skulls with all the glee we’d always hoped he would have if ever given the opportunity. The gore is so much fun that it makes the shoddy plotting and characterization a bit easier to digest: while Hannibal wisely dispenses with many of the novel’s more convoluted story threads, there are plenty of nips and tucks that might have allowed for a more active Starling (she spends most of the film in a basement) and more opportunities for Lecter to play chess master. Still, there’s so much charm and goofy fun to be had in Hannibal that it’s hard to dismiss it for its bloated pace or lack of realism. We’re here for the killer boars and faceless pedophiles, after all.

“I do admire your courage. I think I’ll eat your heart.” 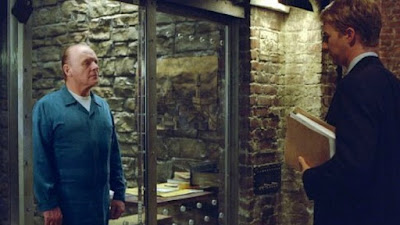 Essentially a Hopkins-verse update of Manhunter, Red Dragon is the rare remake that offers audiences something new. It’s a much warmer film than its predecessor, more focused on story and theme than on style or melodrama. While it’s easy to write it off as a cynical cash-grab, a pale and unnecessary reboot of true art, it works hard to earn its place in the Lecter canon. It’s more faithful to the source material than Mann’s film, and though Ratner isn’t exactly a director with a distinct style, he borrows lovingly from a number of sources to make a film that is far more intelligent and exciting than it has any right to be. It’s a Hannibal Lecter legacy production, in a way: Lambs screenwriter Ted Tally returns, along with Manhunter cinematographer Dante Spinotti. It’s also a true ensemble piece: this time around, Graham and Lecter (Edward Norton and Anthony Hopkins) are intertwined from the start. Dolarhyde (Ralph Fiennes) is more fleshed-out and sympathetic, struggling not only with Reba (Emily Watson) but with his family legacy, as well. Phillip Seymour Hoffman and Mary-Louise Parker give their characters more depth in a few scenes than many actors accomplish in leading roles.

Having seen the three films that came before, Ratner and Tally clearly knew what audiences wanted to see. They sought to replicate the look and feel of The Silence of the Lambs while also telling their own story. Lecter is where he should be - behind the glass. He’s a different Lecter, though. Angrier. Pettier. More resentful. His relationship with Graham is completely distinct from the one he’ll later share with Starling, and his characterization reflects that. This isn’t a mentor opening a young protégé’s eyes to the cruel reality of existence, but rather a pair of old rivals trying to settle scores. It’s this key difference that prevents Red Dragon from feeling too derivative. Lecter is best in small, purposeful doses. He’s not relatable. He’s not a leading man. He fleshes out themes and introduces new layers to preexisting conflict. Red Dragon understands this. It gives Lecter direct story efficacy from within the confines of the cell, which keeps us sound in our continuity and gives some insight into what he did with those eight long years. It’s also much broader, more of a big Hollywood film than Silence, which isn’t necessarily a bad thing. While Jamie Gumb was insulated and secretive, Francis Dolarhyde’s story requires a little bombast, a little star power. Red Dragon is a workman’s film, sure. It lacks the intimacy and character of Silence, but it works.

“Rudeness is an epidemic.” 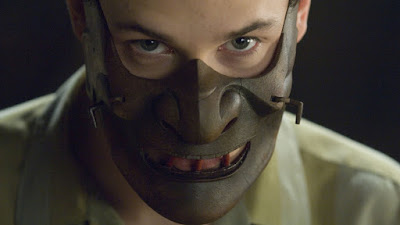 The story goes that producer Dino De Laurentiis bullied author Thomas Harris into writing Hannibal Rising, the novel that chronicles Lecter’s upbringing and transformation into the famous serial killer. “We’re going to make it with or without you,” he barked, to which Harris eventually relented, not wanting to see his character mistreated by other writers. He even wrote his own screenplay for the film adaptation a year later. It was imperative, Harris felt, that the dullest and most obvious version of the Hannibal Lecter origin story be preserved in the annals of film history for all time. His tale begins while Lecter (Gaspard Ulliel) is a young boy with a happy family living in a giant Lithuanian castle. Nazis invade, killing his parents and cannibalizing his sister, Mischa (Helena-Lia Tachovská). He escapes to Paris and enters the care of his widowed aunt, the mysterious Lady Murasaki (Gong Li). She trains him in the ancient discipline of the League of Shadows while he studies anatomy and listens to classical music. Soon, as his bloodlust reaches a fever pitch, he decides to take his revenge on the monsters who murdered his sister.

Again, it’s impossible to overstate how bland and formulaic Hannibal Rising is. For years, we’ve wondered, “How does Lecter know so much about medicine and cooking?” The answer is that he studied with doctors and chefs. “How does he learn to kill?” His aunt gave him some swords. “How does he know so much about literature and art?” He read a lot of books and looked at a lot of art. The film so completely misunderstands what makes Hannibal interesting; we don’t want to know exactly what made him who he became. We want him to be mysterious, special, almost extra-terrestrial. It’s fine to admire Lecter (the series depends on it), but we shouldn’t be asked to sympathize with him. We don’t want to know that he loved his sister and that terrible things happened to her. Even if we did, that’s something that would destroy a lesser, mortal man, not him. Facing off with Hannibal is supposed to be about facing off with the fear we hold inside of ourselves, about walking that unspoken line between civility and hedonism. The audience is supposed to bounce off of him so that we can find our center of moral gravity. Anyone can sympathize with the Lecter presented here (Ulliel, to be fair, is very striking in the role), which robs the character of everything that made him interesting. Perhaps some psychopathic, cannibalistic, murdering stones are better left unturned.
Posted by Patrick Bromley at 12:00 PM