Glutton for Punishment: War of the Colossal Beast

Almost a model of how NOT to make a sequel, I am recommending this stinker for just one reason!

We are all interested in bad movies, drive-in dreck, and men who have grown to ten times their normal size through atomic mutation, for those are the giants to whom we feed our surplus bread. You are interested in the unknown, the mysterious, and the colossal—that is why you are here. The absurdly low budgets, the needlessly circuitous screenplays, the laughable special effects—my friend, we cannot keep these a secret any longer. Let us punish the guilty. Bert I. Gordon is guilty. Let us reward the innocent. Remember, my friends: terrible movies such as these will affect you in the future!

In 1957, Producer Bert I. Gordon (BIG, get it?) had an unexpected drive-in hit with his film The Amazing Colossal Man (originally shown on a double-bill with Gordon’s Attack of the Puppet People). Less than a year later, Mister BIG was back with War of the Colossal Beast. 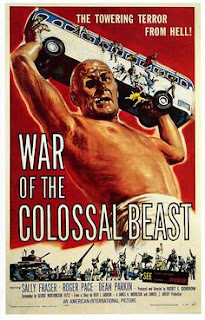 War of the Colossal Beast is a textbook example of a sequel gone horribly wrong. The titular “Beast” is the first movie’s “Man,” Col. Glenn Manning—but none of the other characters have returned. In fact, even actor Glenn Langan, who played Manning in The Amazing Colossal Man, tapped out for the sequel; in his place we have Dean Parkin, the left side of his face so covered in scary make-up that the producers must have feared audiences would resent the switch. Amazing dealt with Manning’s growing crisis (ha!!!) and its effects on his wife and his army superiors. War concentrates its narrative time and energy on the disappearance of a wholesale bakery truck, the plight of a Mexican sheriff, and the ennui of Glenn’s sister. Beside the baker, we also have a doctor and a Major—where are the butcher and the candlestick maker? 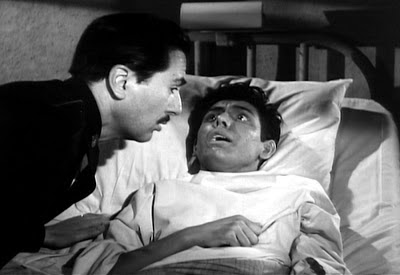 I jest, but not really. War of the Colossal Beast features none of the story elements that made the original film so famous. Because special effects footage of the giant man was expensive, it is kept to a minimum. Before we learn the fate of the ol’ big guy from the first movie, we must sit through interminable footage of three men searching for a missing truck in real time, an injured young man comatose in a hospital bed in real time, Glenn’s sister Joyce mixing highballs in real time in her kitschy 1950s-style apartment… and oh yes, a former Lt. Colonel in the United States Army who wears a diaper and stands over sixty feet tall. Say, let’s save that LAST bit for the FINAL twenty minutes! 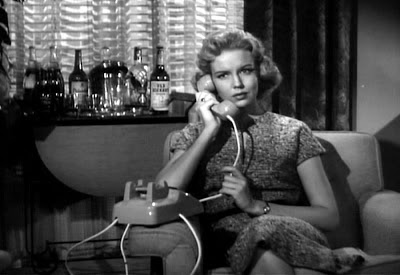 The special effects in War of the Colossal Beast are not so special. The audience is never distracted from the fact that this is a normal-size actor placed into the action with an optical printer and asked to play around with unconvincing miniature props. Sometimes, just to tease us, Gordon will almost pull off an impressive shot—and then the poorly done special effect renders the Colossal Man semi-transparent in front of the process plate. It’s hard for Glenn to be menacing when we can literally see right through him.

FUN NOTE: What do War of the Colossal Beast and Rebel Without a Cause have in common? Both climaxes were filmed at beloved Griffith Observatory. Bowfinger too! 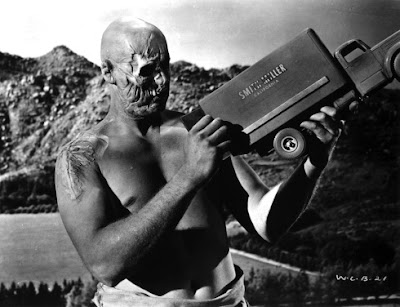 Why am I recommending this colossal turd? The only legal way to watch it—besides split into bite-sized pieces on YouTube—is to purchase the Mystery Science Theater 3000, Volume XXXIV box set. Why would you want to do this? Because the Mystery Science Theater 3000, Volume XXXIV box set contains three other American International drive-in quickies; a funny guy and two puppets telling jokes throughout the movies; and the terrific, feature-length documentary It Was A Colossal Teenage Movie Machine: The American International Pictures Story, which I first saw last summer at Monster Bash. This terrific documentary, directed by Daniel Griffith, is worth the price of admission alone. It tells the true story of this important studio in a fun and engaging way. 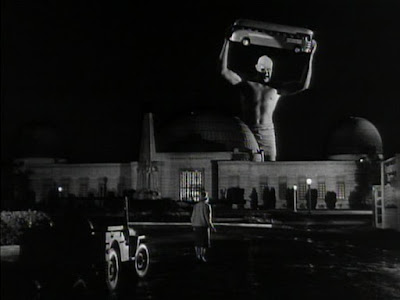 My friend, you have now read this column, based on my own sworn testimony. Can you prove that this film doesn’t exist? Perhaps on your way home, you will pass Lt. Colonel Glenn Manning, the amazing colossal man, and your heart will go out to him. You will pity him… and he will eat you alive. Many scientists believe that bad movies are being filmed at this very moment. We once laughed at fire, the wheel, gravity, and radiation-caused gigantism. So much laughter! So much pain! So much stolen bread! And now some of us laugh at very bad movies. God help us in the future.