Great Horror Performances: Bradley Whitford & Richard Jenkins in The Cabin in the Woods 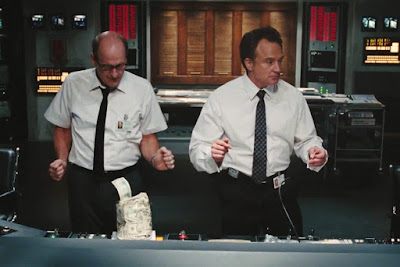 “These f*cking zombies. Remember when you could just throw a girl in a volcano?”

Spoilers ahead for The Cabin in the Woods:

Every great film has a conscience, a moral center. It’s usually the scrappy underdog hero or the wise old grandmother. They hammer home the piece’s themes and remind us what we’re all supposed to have learned. Many of those stories have an ego, as well. These are your Captain Kirks and your Batmen, characters who have to make the hard choices without taking refuge in cold logic or mushy emotion. It’s this thankless third path that often complicates things a bit, and while the ego’s cynical outlook can make it tough to cheer them on, it does give them the instincts and dexterity to get shit done in those real moments of truth. In the end, we root for that. We root for Steve Hadley and Gary Sitterson, the characters played by Bradley Whitford and Richard Jenkins in Drew Goddard’s The Cabin in the Woods. They’re not the heroes, but they are right. They are just. They do make the hard choices. While those characters certainly live on the page (dripping with that trademark Whedonesque snark), it’s Whitford and Jenkins’ fluid and confident performances that elevate the Shadowy Underground Operations Managers into truly memorable horror personalities. 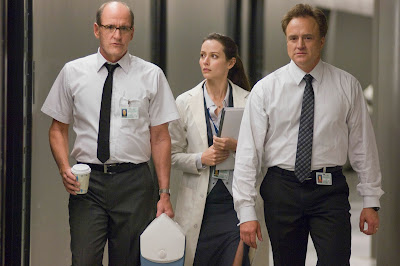 For the uninitiated: Long ago, the Ancient Ones ruled the earth, presumably inflicting pain and chaos on lesser beings. Then came the truce: humanity will earn a spot at the top of the food chain for as many years as they’re able to perform a deadly ritual sacrifice. These rituals vary by culture (the Japanese, for example, torture nine-year-old school girls with possessions and poltergeists), but they all end the same way: young people are offered up in supplication for the sake of the greater good. Over time, these rituals have evolved into our horror movie tropes and clichés. Leading the American sacrifice fulfillment squad, Hadley and Sitterson rely on the age-old Cabin in the Woods scenario, in which a five-man band of teenagers gets sloppy and stupid enough to be systematically axed by horrible monsters. It’s tired and repetitive, but it works. They rig the lighting and spring a few traps, the chemistry department (led by the amazing Amy Acker as Lin) works in a little “dumb blonde” hair dye and fills the stoner’s bong with crazy juice, and before you know it, the Ancient Ones are sated for another year. It’s routine, typical. It’s in this punch-clock approach to their characters that Whitford and Jenkins excel.

Herein lie the obvious parallels with the movie business: these two are the horror directors and producers who churn out the same vapid, exploitative schlock year after year. We are the Ancient Ones, the uninspired and temperamental audience that revels in that schlock. The film beautifully illustrates the bizarre dichotomy between the tension and brutality of the on-screen world with the mundane and calculated box-checking behind the scenes. These two middle managers have been doing the job for so long that the magic is mostly gone (save for the occasional boobies), and Whitford and Jenkins bring such an amazing physicality to boredom that it’s almost revelatory. It’s not as if they’re playing it like register-jockeying teenagers; they understand exactly how important their jobs are and how much is at stake. They’re just so confident in their expertise that you can smell the swagger from your living room. They hum with musical precision, bouncing jokes off of one another while trying to get a rise out of Lin. They screw with Mordecai, The Harbinger (Tim DeZarn) and take condescending jabs at the new guy, Truman (Brian White). The betting pool (in which they specify the difference between a “zombie” and a “zombie redneck torture family”) is their masterstroke. It’s that special kind of assertiveness that comes with knowing you’re really, really good at really, really hard work. 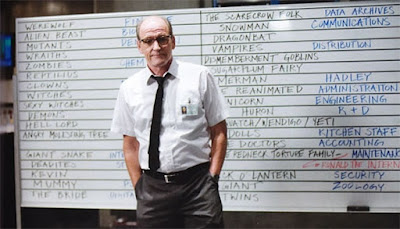 A note on Bradley Whitford: Fans of The West Wing know just how fun it is to see him chew into exceptional dialogue, so watching him play around in Whedonland after a decade in Sorkinville is practically pornographic. This isn’t to take anything away from Richard Jenkins (one of our very best character actors), but there is a cadence to good writing that Whitford always leans into and makes his own. He’s such a human performer, an actor who infuses so much vulnerability and thoughtfulness into everything he touches. But again, he and Jenkins carry different-but-equal weight: the “kill him” moment that Sitterson shares with Dana and Marty (Kristen Connolly and Fran Kranz) is one of the film’s most poignant, and it’s really their joint presence that becomes one of the major keys to The Cabin in the Woods’ success. When things go all pear-shaped (and they do), they prove their mettle and fight like hell. The film exempts them from moral responsibility for the more homicidal aspects of the Truce while still managing to teach them a lesson: maybe we shouldn’t be listening to the Ancient Ones. Maybe talented people should take chances and try new things. We could certainly stand to live in this pair’s world a while longer.