Off the Shelf: The Rift (Blu-ray) 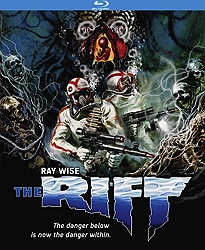 The danger below is now the danger within.

1989 was the year of the underwater monster movie. Between DeepStar Six, Leviathan and The Rift (aka Endless Descent), horror fans had no shortage of Alien rip-offs set well below sea level (’89 was also the year of James Cameron’s The Abyss, which isn’t a horror film but does follow a deep sea expedition that stumbles upon an otherworldly life form). How all of these films wound up coming out in the same 12-month period, I cannot say. Maybe it was something in the water?

An impressively-coiffed Jack Scalia (Jersey Shore Shark Attack) plays a member of the experimental submarine Siren II, which is sent to an underwater rift to investigate the disappearance of the original Siren. It’s there that the crew — also comprised of R. Lee Ermey, Ray Wise and Deborah Adair — encounters some freaky monsters and mutants looking to spread their contagion to anyone who’s still human. 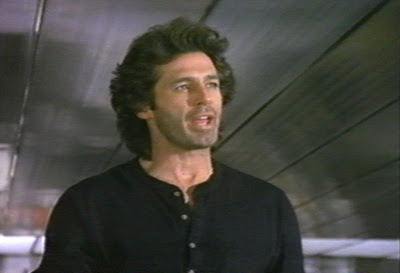 The Rift is the least successful of all three of the aquatic horrors released in ’89 (for those keeping score at home, Leviathan is the best of the bunch). Maybe that’s because it’s directed by one Juan Piquer Simón — billed here as “J.P. Simon” — the man responsible for movies like Slugs and the truly bonkers slasher classic Pieces. He’s a filmmaker who brings competency but rarely artistry and whose taste and choices can sometimes be questionable. His particular brand of madness is more or less kept in check for The Rift, which is both its blessing and its curse: while more commercially accessible than his other horror films, the end result lacks the distinctive personality of his more…let’s say “colorful” efforts.

What Simón has going for him is an impressive cast, elevating the junky material into something that is, even in its worst moments, totally watchable. R. Lee Ermey, who made his name barking orders as the go-to drill instructor for every movie, is uncharacteristically restrained but still projects authority because he’s incapable of doing otherwise. Ray Wise isn’t so much an actor as he is a natural resource, and his character only gets more interesting and predictably Ray Wise-like as the movie goes on; you don’t cast Ray Wise unless you’re going to let him play a Ray Wise role. While Scalia and Adair are mostly generic in the leads, the supporting cast of dependable character actors help make the movie work by committing to the reality of their plight while still understanding what movie they’re in. 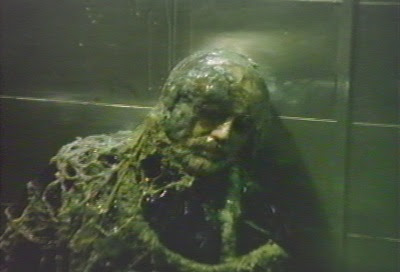 The Rift comes to Blu-ray courtesy of Scorpion Releasing. Presented in its original 1.66:1 widescreen in an incredible new 1080p HD transfer (seriously, there’s no way the movie has ever looked this good), the film is photographed well; colors are bold, skin tones look good and hardly any signs of age are visible despite the film begin almost 30 years old. The lossless stereo audio track offers a solid mix of dialogue and effects, and while it’s not the most atmospheric mix (particularly for a horror movie set largely on a submarine), there’s not much to complain about. Wise, Ermey and and Scalia all sit down for newly recorded extended interviews (except Ermey’s, which runs under 10 minutes) to discuss the making of the movie. All of the interviews are terrific, with no one holding back on their memories or their feelings about the film — especially Ermey, who does not hold The Rift or its director in high regard. The original theatrical trailer is also including, billing the movie under it’s original title Endless Descent.

More Luigi Cozzi’s Contamination than Ridley Scott’s Alien, The Rift is an entertaining B-movie with a solid cast and a few spectacular moments of gore. But when it’s the third-best aquatic horror movie from a year that saw the release of three aquatic horror movies, it’s difficult to give it too strong a recommendation. Scorpion’s remastering is terrific and the supplements are entertaining, but the film itself is too silly to be taken seriously but too tame to be enjoyed as a true expression of director Juan Piquer Simón. It’s stuck in the middle, not brave enough to go any deeper but unwilling to come up to the surface with the rest of us. Because that’s how you get the bends.