Off the Shelf: Special Effects (Blu-ray) 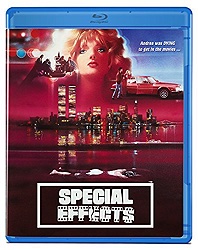 Andrea was DYING to get in the movies...

The joy in watching a Larry Cohen movie is that you're never sure what you're going to get. Yes, you may know the premise -- couple has monstrous baby or killer yogurt becomes the biggest dessert craze in America -- but you're never sure where things will go from there. Every single one of his films (and I'm speaking here of the ones he has directed) has some sort of twist or eccentricity -- often more than one -- to keep audiences off kilter. His work resembles nothing else but other Larry Cohen movies. We have taken him for granted for too long. 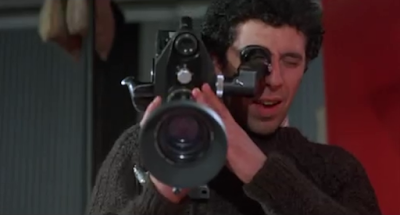 His 1984 meta-thriller Special Effects was one of the few remaining Larry Cohen movies I had never seen, an oversight finally remedied by the new Blu-ray from Olive Films. It stars Eric Bogosian as filmmaker Christopher Neville, whose last movie was an expensive bomb and who is on the outs from Hollywood; his career salvation comes in the form of Andrea (Zoë Lund of Ms. 45 fame, billed here as Zoë Tamerlis), a wannabe actress who secretly moonlights in porn to the dismay of her conservative husband Keefe (Brad Rijn). While spending some time on the casting couch with Andrea, Neville strangles her in a fit of rage and catches the whole thing on his hidden camera. Seeing on opportunity for his next film, Neville begins casting and recreating Andrea's life leading up to her death with the participation of her husband, the homicide cop investigating the case and Elaine (Lund again), a lookalike cast as Andrea's onscreen stand-in.

There is so much to unpack in Special Effects, a movie that's years ahead of its time in the way that it examines the relationship between cinema and reality and how they constantly reflect one another; it's like Albert Brooks' Real Life crossed with Body Double with some Vertigo thrown in. The longer the film goes, the deeper into Neville's new project we go, the more those lines begin to blur -- Keefe is reenacting moments that really happened with his wife except he wasn't originally there and is acting opposite a woman who looks exactly like her. There are also satirical elements to the film, probably because Larry Cohen is incapable of not being satirical, like the subplot with the cop who trades in his investigation for a producer credit and starts doing his own rewrites -- everybody wants into the movie business. 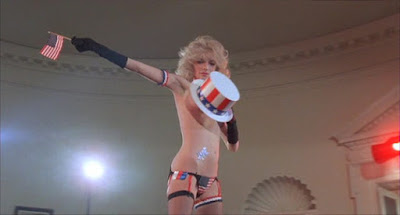 The best thing the movie has going for it (besides Cohen's voice) is the performance of Eric Bogosian, still one of the all-time great pricks in cinema history. At the time still known as a playwright and New York actor, this was his first major movie role (after a bit part in Lizzie Borden's Born in Flames one year prior) and it's a part to which he is perfectly suited. Neville is impossibly arrogant and in control -- the right guy to be calling the shots behind the camera -- but also a sociopath and smart enough to not get caught. Bogosian plays the part like a shark, always thinking (sharks think?), always moving, always preying on whatever's next. Less effective is Lund in a dual performance, the first of which appears to have been dubbed by another actor doing a Southern accent and the second of which can't quite decide on an accent (she starts doing a stereotype of a Jewish New Yorker but abandons that pretty quickly). At the same time, I love seeing her in the movie for what she means to the New York film scene and because her performance, like Cohen's direction, is so full of rough edges. 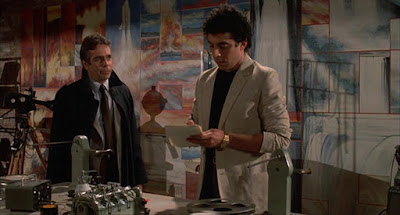 Though available on DVD since 2004, Special Effects has never quite caught on the way that some of Cohen's other films -- The Stuff, It's Alive, even Q the Winged Serpent -- have found a cult audience over the years. Maybe Olive's new Blu-ray will help people find it. Presented in a new 1080p HD transfer in its original 1.85:1 widescreen aspect ratio, the movie looks solid while still faithful to its low-budget roots. Cohen shoots New York in his usual quick and dirty style, but there are some images (like Bogosian's "red room," for example) that pop in HD. The disc comes with a commentary from Cohen, joined by Steve Mitchell, director of the upcoming documentary King Cohen: The Wild World of Filmmaker Larry Cohen. Cohen, as always, is an engaging raconteur, talking about his intentions with the movie and praising the work of many involved. The original trailer is also included.

Special Effects is one of the happiest surprises of my #ScaryMovieMonth. Though not quite horror -- I guess "thriller" would more accurately describe it, though so many of Cohen's movies defy classification -- it is always engaging and unpredictable. I love its '80s New York independent film vibe, I love its rough edges, and most of all I love Bogosian's performance. If you're any kind of fan of Larry Cohen's work and haven't yet seen this one, it's worthy of a blind buy.