A Movie I'm Thankful For: Willy Wonka & the Chocolate Factory 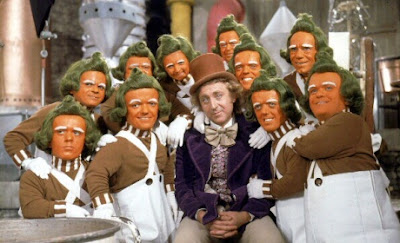 “Tell me, where is fancy bread: in the heart or in the head?”

Many of us are a bit stunned and saddened these last few weeks, but I have always found this film to be a sure cure for the blues. Made by a team that realized that children’s entertainment is the highest calling, not just a fallback when mainstream success proves elusive, Willy Wonka and the Chocolate Factory is one of the best “kiddie pictures” ever made. 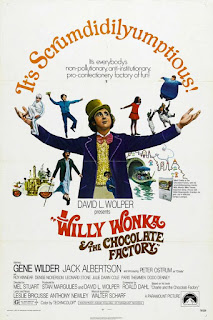 The Plot in Brief: Willy Wonka’s famous chocolate factory is a secret. No one ever goes in, and no one ever comes out. One day, Wonka (Gene Wilder) announces a worldwide contest, the prize being a tour of his facility and a lifetime supply of chocolate. Five golden tickets have been placed inside Wonka chocolate bars, and the lucky finders of those will win the prize. 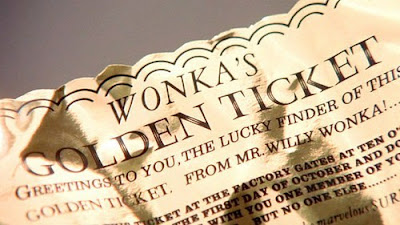 Gene Wilder is the cornerstone of the film and gives his greatest performance in it. By turns mysterious, mischievous, winsome, antic, sarcastic, and downright scary, the audience never quite gets a handle on his Willy Wonka, until all is revealed in the film’s climax. I love how he sings his solo song, “Pure Imagination,” not with happiness and joy, but with wonder and, dare I say, sadness? The depth of feeling he brings to this simple song is impressive and keeps the film from seeming “one note.” I just love all of the Internet memes that have sprung up featuring Wilder’s expressive “Wonka face.”

Both Roald Dahl, the author of the beloved source material, and the filmmakers realized that for the happy ending to ring true, the scary stuff had to be honestly scary. “The Rowing Song,” which Wilder recites like a man possessed as he and his charges embark on an eventful boat ride, has to rank as one of the “Top Five Scariest Scenes” in the history of children’s films. Another reason to recommend this film is that the funny stuff is honestly funny-- especially Wonka’s many asides.

There’s no earthly way of knowing
Which direction we are going.
There’s no knowing where we’re rowing
Or which way the river’s flowing.

Is it raining, is it snowing?
Is a hurricane a–blowing?
Not a speck of light is showing,
So the danger must be growing.
Are the fires of Hell a–glowing?
Is the grisly reaper mowing?

Yes, the danger must be growing
For the rowers keep on rowing,
And they’re certainly not showing
Any signs that they are slowing… 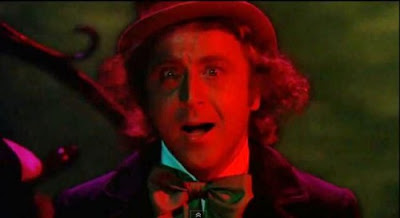 The performances by the child actors are quite good. I have read that Gene Wilder got along famously with all of them, except young Paris Thieman. While shooting the picture, he gave a television interview in which he stated that four of the children were delightful, but that he “was going to throw one of them out the window tomorrow.” Veruca Salt’s solo song, “I Want It Now” is so delightful that I sometimes wish that each child got his or her own solo, but that is a quibble. “The Oompa Loompa Song,” which is used in place of the book’s lengthy, preachy poems, suffices to summarize each child in song.

So here we have a film about a mysterious and possibly malevolent man, who is in charge of a vast enterprise. We have our doubts and fears, but we are forced by circumstance and the hope of reward to come along on this tour. Is he crazy? Does he really have our best interests at heart, or is he just out for himself? Will we be harmed in any way by this journey?

There’s no knowing where we’re rowing, or which way the river’s flowing...

I pray nightly that at the end of the next four years, I get my chocolate.