“The point is I don’t love your wife. I love your daughter, sir.” 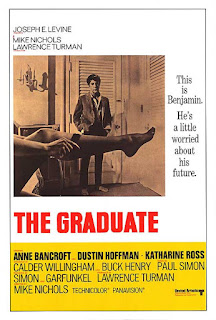 The Graduate (1967) and I go way back. I saw it for the first time when I was 11 years old. I had just received the worst report card of my life, and my parents were livid. First they yelled at me, then they went out to dinner. They went out to dinner a lot, back in the days when it was appropriate to leave a sixth-grader home alone to fend for himself with a Swanson TV Dinner. My awful report card made me feel like something the cat dragged in. I turned to the CBS Wednesday night movie for solace and succor. CBS showed me The Graduate.

Sure, today I may be the infallible Pope of Film, but at 11 I was at a low point in my life that I thought would never end. This movie made me feel better—it showed me that tough situations could be overcome, and that the approbation of one’s parents need not be the end of the world. I am convinced that millions of people have seen this movie and found similar reasons to relate. Thanks, The Graduate.

The Plot In Brief: Benjamin Braddock (Dustin Hoffman) has just graduated from college and doesn't know what to do with the rest of his life. Living again with his parents the summer after graduation, he begins a torrid, clandestine affair with a married friend of his parents, Mrs. Robinson (Anne Bancroft). Realizing that this relationship can go nowhere, he attempts to break it off. He is unsuccessful. His parents badger him into going on a date with the Robinson’s daughter, Elaine (Katharine Ross). Benjamin falls in love with Elaine. Big problem.

Apostle Patrick and I once recorded a podcast on The Graduate—one of my “Top Ten” favorites we’ve ever done. When I began my tenure as a high school Film Studies teacher, there was no such thing as a podcast! So imagine how strange it was when one year, tired of assigning the same old critical essay on The Graduate to my classes, I began to assign listening to the podcast as a homework assignment. This was either the height of lunacy or the height of vanity. I was surprised how many of them wouldn’t do it – they couldn’t even invest an hour. And this is a movie they like!

For its recent Blu-ray release of The Graduate, Criterion Collection ported over an astounding amount of bonus materials from its earlier LaserDisc release, notably audition footage of both Hoffman and Ross and several actors who did not get the part. It’s essential viewing, and really interesting to see other actors’ interpretations of film characters that have become iconic. It’s also interesting to note that Charles Grodin, who auditioned for the part of Benjamin, did not grant permission to include his audition; his voice is actually edited out of the audition of a would-be Elaine.

My students, who are mostly seniors, see the film very differently than I did on that fateful Wednesday when I was only 11. They're just about to hit the epoch that Benjamin experiences in the film: graduation, and the “what now” that inevitably comes right after. Benjamin has no idea what to do with the rest of his life; my students, too, are largely without a clue, beginning the transition into adult life with no clear path. I prescribe watching this film as the antidote to the tragic and paralyzing ennui that everyone faces during such a time.

One cannot talk about The Graduate without talking about its musical score, which was groundbreaking for its time. Instead of hiring a standard composer to write a standard movie score, director Mike Nichols used already existing music from the catalog of Simon & Garfunkel, a then-popular folk duo. Nichols convinced them to write a couple of new songs for the movie, but didn’t like any of the songs the duo presented. However, Paul Simon had been working on a song called “Mrs. Roosevelt;” they changed the lyric to “Mrs. Robinson” and sang what they had for Nichols, who loved it. The song was a radio hit and became emblematic of the movie. I bet most of you have heard it, and may have formed the (mistaken) opinion that The Graduate features a surprise cameo from Joe DiMaggio of the New York Yankees. 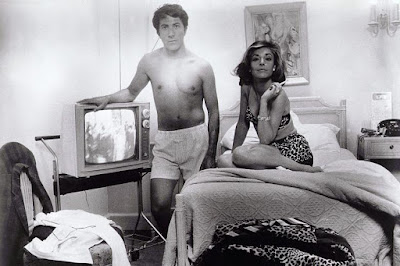 Simon & Garfunkel’s music even influences Nichols’s editing of the film. In my favorite sequence, Nichols fragments space and time to show the endless existential slog that Benjamin’s life has become. The song “The Sound of Silence” plays over the sequence, and Nichols cuts the film fragments to the rhythms of the song, which fades before the sequence ends. The soundtrack goes to silence, then to the song “April, Come She Will.” It’s as if Benjamin (or Nichols, or the audience) is listening to an album and simply let it play into the next song, and the pace of the editing changes to match the second song.

The Graduate’s Three Miracles: Dustin Hoffman’s understated, hilarious performance, which anchors the whole enterprise; Nichols’s “Let’s Try This and See If It Works” direction, which still seems fresh and unexpected almost fifty years later; and Simon & Garfunkel’s score, which is lovely, haunting, and delightful, even given that one song is repeated three times.