Off the Shelf: Salem's Lot (Blu-ray) 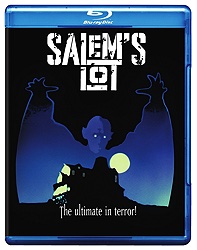 I vant to suck your blooood, ayuh!

For his second novel, Stephen King tackled one of horror’s most entrenched genres: the vampire story. While the bloodsucking undead were still a quarter century from pop culture ubiquity, 1975’s Salem’s Lot still hit shelves with the baggage of Stoker, Murnau, and Lugosi in tow. It’s hard to say whether the move to capitalize on an existing monster was a good or bad idea. Salem’s Lot isn’t King’s most popular novel, but it is a creepy story well-told with his signature small town flavor. Four years after publication, Salem’s Lot found its way to the small screen, courtesy of The Texas Chain Saw Massacre director Tobe Hooper, writer Paul Monash, and forward-thinking folks at Warner Bros. who realized the story would work better as a three-hour TV miniseries than a 90-minute feature film. 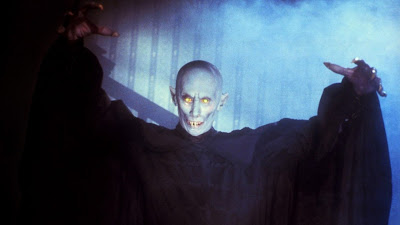 Some Stephen King movie adaptations are great, some are good, some are… not. Nearly all of them, however, feel cramped in some way. The author writes sprawling 1,000-page novels full of rich characters. It’s as difficult to fit those complex relationships into a feature film as it is easy to thrill audiences with on-screen depictions of his shocking set-pieces. Although there aren’t a ton of great examples, there’s an argument to be made that the ideal form for a King adaptation is the miniseries. Three to four hours isn’t necessarily long enough to capture a Stephen King novel, but it’s a lot closer.

Salem’s Lot is the story of Ben Mears (David Soul), a best-selling author who returns to his childhood home of Jerusalem’s Lot, Maine, with plans to write a book about a large, spooky manor that overlooks the town. He is disappointed to discover that the ancient house is already being rented to a European antiques dealer named Straker (James Mason) who has set up shop on Main Street and is waiting for the arrival of his mysterious business partner, Kurt Barlow. As Mears settles back into small town life, reuniting with his favorite high school teacher (Lew Ayres) and starting a relationship with university grad student Susan Norton (Bonnie Bedelia), he can’t shake the feeling that something bad is about to happen. When the town is rocked by a series of deaths, disappearances, and neck bitings, Mears joins forces with monster-savvy high school student Mark Petrie (Lance Kerwin) to stop the evil. 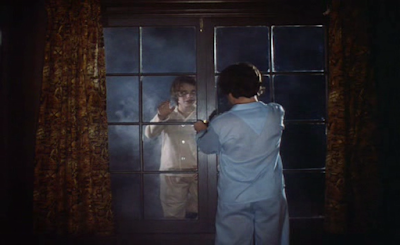 Salem’s Lot is an oft-overlooked Stephen King book, but it might be the best of his adaptations. Hooper brings a stylish eye and horror filmmaking chops to the story. The movie isn’t bloody but it feels scarier than what should have been allowed on late ‘70s TV. Some of the creepiness comes from the vampire effects. When Barlow finally shows his face it’s not a pretty one: blue, with needle-sharp teeth and animal eyes. The vampiric townsfolk aren’t as grotesque, but nothing raises goosebumps quite like a floating, grinning dead child scratching at your bedroom window in the middle of the night.

The extended TV runtime allows for more storylines and characters. A shorter version of this movie would be laser-focused on Mears, Petrie, and the evil inhabitants of the Marsten House. Hooper’s version certainly compresses storylines and limits screen time for certain characters (for example, Father Callahan, who played a role in this book and King’s Dark Tower series), but there’s breathing room. Leaving space for more character moments gives Salem’s Lot the feeling of a fully populated Stephen King small town. Even if it all comes back to Barlow’s plan to take over the town, Hooper gives us a peek into day-to-day character lives, something that is too often cut from King movies.

Salem’s Lot is dated, but in a good way. The outfits and David Soul’s hairstyle root the film the 1970s, but it all fits the Halloween vibe of the story better than if it were set in modern day. Hooper and Return of the Living Dead cinematographer Jules Brenner have created a movie that feels more like a three hour epic feature than a made-for-TV affair. Salem’s Lot comes to Blu-ray alongside another King miniseries, IT. While the adventures of demon clown Pennywise is well-loved, that adaptation feels like something made for the small screen. Salem’s Lot doesn’t. The directing, production values, and performance of the incomparable James Mason all scream major motion picture. The only lingering indication of its television origins is a cast that features many TV actors, including Starsky & Hutch’s Soul, soap star Bonnie Bedelia, and comedian Fred Willard. 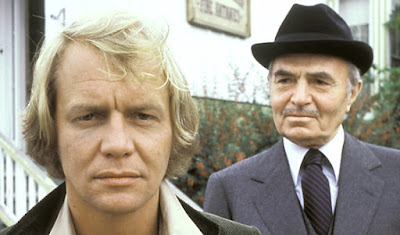 Though it was made for TV, Salem’s Lot is the best looking of the three new Warner Bros. Blu-rays. Chalk it up to filmmaking talent, source print quality, and scan technology. The transfer comes with similar caveats as Cat’s Eye and IT — most notably the tendency of shadows to swallow detail — but it’s hard to imagine the 1.37:1 1080p transfer looking any better without it getting the Scream Factory or Criterion “collector’s edition” treatment. Detail and color are sharp against a pleasant layer of grain, with no sign of nasty digital smoothing or damage. Anyone who has worn out the movie on VHS will be impressed. Audio comes as a DTS-HD Master Audio mono mix. What the sound lacks in blockbuster sizzle it makes up for with clarity.

Because this is essentially a budget disc, don’t expect many extras. There’s no additional “European Cut” of the film. No interviews. No retrospective. The only bonus feature is an audio commentary with Tobe Hooper — a cool guy and horror master with interesting things to say.

There’s a whole lot to like about Salem’s Lot. It’s almost incidental that Tobe Hooper’s three-hour Stephen King adaptation happens to have been made for television. You may be tired of vampire movies — I sure am — but Salem’s Lot is a refreshing throwback. King’s Downeast Gothic tale still thrills and chills on Blu-ray, so long as you don’t expect much more than the movie itself.