Without a Paddle: Alfred Hitchcock’s Lifeboat 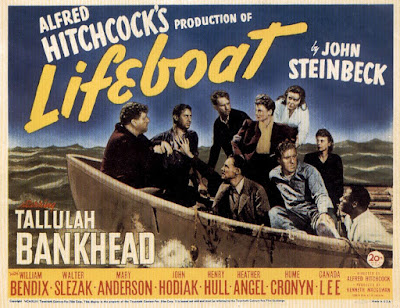 Human beings are tribal animals: We love to put ourselves in boxes with labels and other identifiers that distinguish Us from Them. Groups provide comfort. Mobs provide anonymity. There’s pride in association, a kind of spiritual connection we feel with those who share our politics or genealogy. But while we may choose (or be forced) to identify with one particular group, the real test is the degree to which we’re willing to coexist with others. We might find it convenient to associate in peace, or we might find it necessary to obliterate our enemies with extreme prejudice. Alfred Hitchcock, ever the critic of social mores and institutional ambitions, brings these questions to light in his underrated wartime film, Lifeboat. Shot almost entirely on one set and featuring a limited cast of characters, it examines the reasons we associate and the divisions that those associations create between us. By forcing a diverse group to fight for a common interest, Hitchcock asks us an important question: is it better to survive together or to die alone? 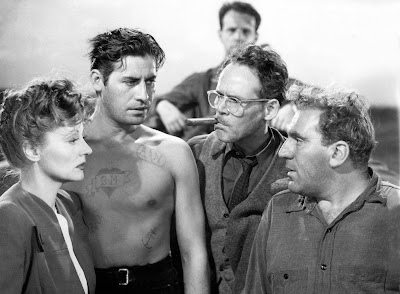 Near the end of World War II, a German U-boat sinks an American cruiser in the middle of the Atlantic Ocean. The ship’s survivors — posh fashion reporter Connie (Tallulah Bankhead), millionaire businessman Rittenhouse (Henry Hull), Army nurse Alice (Mary Anderson), brave steward Joe (Canada Lee), young mother Higley (Heather Angel), and crewmen Kovac, Stanley, and Gus (John Hodiak, Hume Cronym, and William Bendix) — find themselves adrift with limited supplies and no plan for rescue. Being lost at sea is trouble enough, but their mix of ambitions, backgrounds, and destinations makes cooperation a sizable task. Matters are made even worse when they recover German sailor Willi (Walter Slezak), who claims to know the way to safety. Do they listen to this man? Can he be trusted? In fact, can the steward? Can the reporter? Why does she speak German, anyhow? What’s she hiding? Mass paranoia begins to set in, and the survivors realize that there’s a lot more dividing them than their German prisoner.

Like Hitchcock’s best work, Lifeboat’s major strengths are its complex characters and morally-ambiguous tone. It’s a world not unlike our own: a melting pot of cultures, classes, and genders all floating together along the same current. Predictably, racism and class warfare take center stage: the proletariat bruiser Kovac belittles Connie for her jewelry and clothing, while Rittenhouse offends him with his immense wealth and capitalist ideals. Kovac is the first to suggest quarantining the German sailor and the first to stir up xenophobia amongst the rest of the boat. His shipmate Gus is more genial, a lovable dope. His only concern is meeting his Rosie back on the dance floor. But even the delightful Gus sneers at the thought of Al Magaroulian, the flat-footed Armenian who has eyes for Rosie. His quiet sadness develops into an existential crisis and proves that, as in life, we often turn the pain and insecurity inside ourselves into hate and distrust for others. 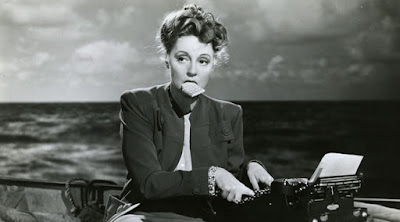 Tallulah Bankhead plays Connie Porter as feisty and self-possessed, which caused Hitchcock some headaches with the executives at Fox. During this time of international strife, they felt, the female lead should exemplify wholesome American values. But Connie’s inclusivity and cosmopolitain outlook become powerful tools for connectivity as the plot develops: she speaks German, allowing her to mediate between the crew and their prisoner. She’s sympathetic to “that kind of girl,” giving sad and naive nurse Alice a shoulder to cry on when she laments her affair with a married doctor. She’s kind and respectful of Charcoal Joe, the film’s only character of color. In a powerful contrast with the film’s other female characters (the nurse is overwhelmed by the shame of her sins, and Mrs. Higley commits suicide shortly after the death of her baby), Connie cuts through much of the posturing that pushes so many young women into subservient roles. Love until you don’t, she’d say. Try until you can’t. Nothing is forever.

Hitchcock also received pushback for humanizing the Nazi sailor, Willi. He’s the subject of frequent discussions and tribunals aboard the ship: should they treat him with the dignity and respect commonly afforded prisoners of war, or, given their limited supplies and living space, toss him overboard? The ethical questions become even more complex as Willi reveals himself to be much more capable than originally thought: he’s actually a U-boat captain who speaks perfect English. How can they trust him? How can he trust them? It’s here that Lifeboat asks just how important our pride and prejudice become in survival situations. How long can we maintain decorum before we lose control? Willi is often the smart one: he privately rations food and water, keeps his abilities and knowledge as vague as possible, and manipulates the reckless disorder of the ship to his advantage. But does that make him evil? He certainly isn’t above petty revenge: his heartbreaking final scene with Gus proves that he’s still a man of his people. Would we have done any different? 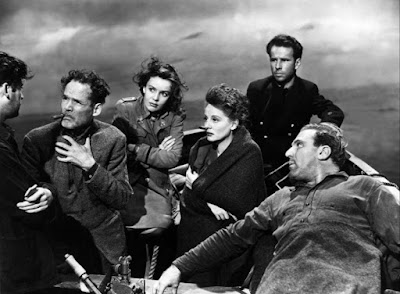 At its heart, Lifeboat argues that we find our personal truths when we shed our labels. Under the hot mid-Atlantic sun, the millionaire happily gambles his fortune with the working stiff. The Yank, the Limey, and the Jerry all brag about the menus of their favorite hometown cafes. But again, dropping their masks goes both ways: they also brutally murder Willi when his treachery becomes apparent (“My only regret is, that in the end, I joined a mob,” says Rittenhouse). Hitchcock then bookends with the film’s opening to build his human beings back into the class-conscious archetypes they used to be: after spotting an Allied ship on the horizon, Rittenhouse climbs into his double-breasted suit. Connie panics about her makeup. Alice asks for Stanley’s surname (they are to be married). Most ironically, they react with disgust when a new German prisoner asks if they’re going to kill him. With their rescue in sight and their divisions reaffirmed, they pretend to be horrified. What are they, savages?