Call me crazy, but this Pope longs to be chased by a goddamned crop dusting plane. 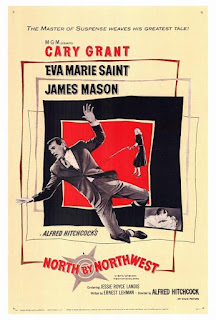 Talk about an iconic scene! I remember one April night in 1980, watching the evening news with the sound turned off. When the indelible image of Cary Grant being chased by that improbable plane appeared over the anchorman’s shoulder, I knew it was to announce Hitchcock’s death. That image—from this week’s featured film, North by Northwest—so well summarizes Hitchcock’s entire career: a sequence with its tongue firmly in cheek, it’s ridiculous, but it’s also the stuff of nightmares. It makes the dangerous fun. That is what Hitchcock did again and again during the 50 years he made movies.

The Plot in Brief: Roger Thornhill (Cary Grant) is an advertising executive whose life is stuck in a rut. One day, responding to a page in a restaurant, he is mistaken for government spy George Kaplan. Some other spies are chasing Kaplan and a strange sculpture full of microfilm. How will Thornhill convince everyone that he is not George Kaplan? Will Thornhill ever find the real George Kaplan? What does all of this have to do with Mount Rushmore? 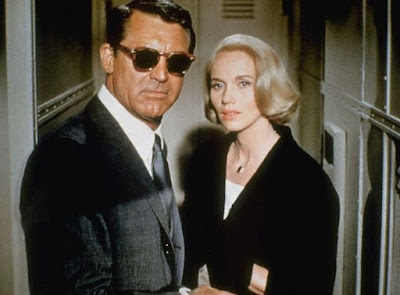 This film is classic Hitchcock: an innocent man is accused of a crime he did not commit and spends the rest of the film trying to prove his innocence. If anyone ever asks what all Hitchcock films have in common, it is guilt. We are guilty. His characters are guilty. That is something Hitchcock knew about everyone: we all harbor tremendous guilt… and secrets.

Clearly, North by Northwest is a boy’s adventure film. It posits adulthood as a life of drudgery, boredom, and routine, and it knows we all secretly long to be tested by action and excitement. Cary Grant’s Roger Thornhill is alive but has no “life.” He longs to break free of the shackles of business and live a life like he sees in the movies. Watching North by Northwest is like taking a crazy vacation where our lives are in danger at every turn. 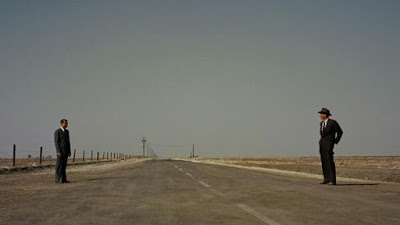 BY THE WAY: The famous sequence in North by Northwest in which Cary Grant and Eva Marie Saint are chased across the faces of Mount Rushmore inspired Mel Brooks, when preparing his Hitchcock send-up High Anxiety, to film a sequence where he emerged from George Washington’s nose wearing a green jumpsuit. That sequence, needless to say, did not make the final cut of the film.

North by Northwest represents the height of moviemaking in the 1950s: the plot is clever, the dialogue is witty and urbane, the performers are glamorous and believable, the direction is astute and never calls attention to itself, the set-pieces (including the crop duster scene and the Mount Rushmore face chase) are iconic, and the musical score is rousing and memorable—truly a full evening’s entertainment. This film is a glass of bubbly champagne, courtesy of Mr. Hitchcock. It never takes itself too seriously, but it provides its thrills and intrigues with class and energy. 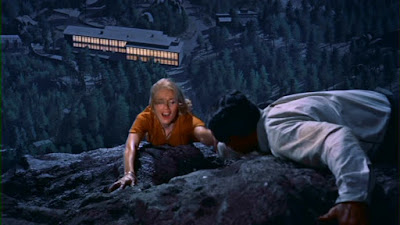 Interestingly enough, it was the success of North By Northwest that inadvertently led to Hitchcock’s next project. Hitchcock chalked up the film’s popularity to its stars, or budget, or genre, or script, or vivid Technicolor; he wondered if audiences would ever flock to a movie just for HIM. He decided to make his next film bare bones and low-budget, using his television show crew and shooting quickly in black and white, in that most disreputable genre, horror—he wanted to see if he could make himself, as director, the main attraction. The film he made was Psycho.

North by Northwest’s three miracles: the perfect mix of all things Hitchcock: improbable story told with precise logic, big star performances, and a twinkling sense of humor, even about inappropriate things; James Mason plays a terrific “Bond villain”—suave, sophisticated, and menacing—five years before Bond was ever put on screen; and Cary Grant turns in one of his best, typically effortless, performances. 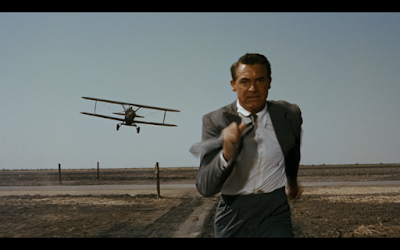