Some people are underappreciated in their time. Others are so appreciated that they are taken for granted in light of their unwavering creativity and steadfast work ethic and simply become part of the landscape. This is the case for my fandom of John Williams. I’ve long considered John Williams my favorite composer, which isn’t really a brave or exceptional choice because OF COURSE he’s my favorite. He’s a lot of people’s favorite, after all. He’s been cranking out memorable scores for decades and has been attached to some of the best movies of our lifetime. I’ve lived with some of his more memorable scores for almost as long as I’ve been alive, and they’ve just become a part of who I am. It’s not an overstatement to say that his music helped me form that relationship with film that allows me to feel and to empathize with what I’m seeing on screen. Music creates a shortcut between the brain and the heart, and Williams is the best there is at achieving this.

But what does any of that really MEAN? Things have been pretty rough recently, and I’ve been looking for comfort in the familiar and the nostalgic even more than I normally do, so this past week I found myself really leaning on the music of John Williams. I have a bunch of his soundtracks on my iPhone so I can listen to them whenever I want to, and I’ve taken unusual comfort and reassurance in his beautiful anthems this past week. Here’s what struck me all over again, perhaps in a way that never quite has before: John Williams is an amazing talent. No, I get it. Duh, right? But somehow, probably because I was so emotionally exhausted and worn out, the music spoke to me in ways that it hasn’t in a very long time. Between the notes of the scores of Williams lies hope and triumph and regality and defiance and, more important than all of these, BEAUTY. The music of John Williams is LIFE in orchestral form. 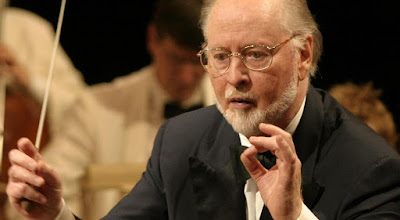 I’ll tell you a secret. I’m in my late thirties and I JUST watched E.T. the Extra Terrestrial for the first time. I was prepared for the possibility that coming to it now, over three decades after its initial cultural impact, could only end in disappointment. Yet I had a visceral, emotional reaction to this movie, in part because Spielberg had such a close personal connection to the material, but also, and I believe mainly, because of the music of John Williams. By the time the final bombastic notes had blasted out of the speakers and the image cut to black, I was feeling everything this movie wanted me to feel. This is because of the power of music, and no one seems to have understood that and been more consistent in tapping into musical notes to draw out our inherent humanity than John Williams.

I think about the movies that John Williams has scored that have been of significance to me. The familiar worlds of the Star Wars saga and the classic adventure landscapes of Indiana Jones would be significantly diminished without John Williams. Harry Potter wouldn’t have his mystical wonder. Superman wouldn’t fly. Aliens from beyond our galaxy wouldn’t seem as benevolent and familiar. Our collective fear of sharks wouldn’t have two notes that everyone across the world knew. The little boy who was left home alone on Christmas wouldn’t feel like a member of our own family. The dinosaurs on the island wouldn’t feel both majestic and frightening at the same time, and those giant King Kong gates that open wouldn’t seem as impressive. An aged Peter Pan wouldn’t be able to rediscover his happy thoughts. Schindler’s mission and the plight of Private Ryan would feel more like history lessons and less like living, breathing human drama.

I can’t think of a single composer who has contributed as much to my life as John Williams. Part of this is because he frequently scores the films of George Lucas and Steven Spielberg, and they make movies that everyone sees. However, it’s also because he really is a phenomenal talent; his understanding of human emotion is what makes him so good at what he does, and he can tap into a moment and make you feel exactly what the director is striving for in a way that seems effortless. I also appreciate the way that he is constantly revisiting and revising themes that he wrote years ago. Upon first watching Star Wars: The Force Awakens last December, I left the theater thinking that it was one of the least of Williams’ scores. I made up reasons for this in my head; he is much older now, and he might not have had the time needed to work properly. Cut to a year later and I’ve been living inside that soundtrack, which I actually consider to be the best Star Wars score of all seven. He’s able to play with themes he wrote almost forty years ago and give them new levels and nuances, undercutting triumph with doubt and adding hope to darkness. The theme he’s written for Rey is probably my favorite piece of John Williams music ever. It’s essentially a spaghetti western theme--complete with brass horns that evoke Spain and Italy--that Ennio Morricone could have written for Leone 50 years ago, but with the added benefit of the connection to emotion. During the end titles music, he couples Rey’s theme with The Force theme. It only happens once, but it’s the most heartbreaking, beautiful thing ever. It’s a meeting of two worlds that melds 2015 with 1977 to create something new. You can feel the weight of age, heartbreak, and hope between those notes. The end titles music ends gently with a quiet, almost angelic recitation of Luke Skywalker’s theme. Oscars aren’t enough for what this make evokes with his music. 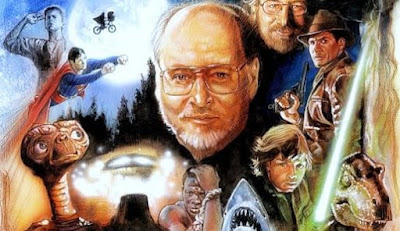 The jazz-cat-turned-composer is in his eighties now, and I recognize that his contributions are nearing an end. Simple reasoning dictates that there will not be much more to come and that the John Williams catalog is nearing completion. It seems like we are losing our heroes faster that we can mourn them, and it is with this awareness that I remove my hat, stand to my feet, and offer a long ovation for the maestro of this concerto while he is still here among us to hear it. THANK YOU. Thank you, Mr. Williams, for writing the soundtrack to my life. Your music paints the world in beautiful shades of light and dark and rings with humanity and hope. I need that humanity and hope more now than I ever have.
Posted by Patrick Bromley at 12:00 PM