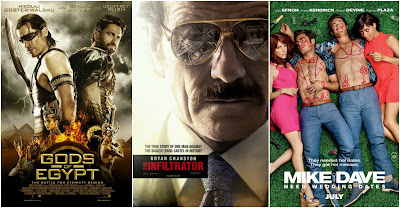 “Where do you even get that many scorpions?” 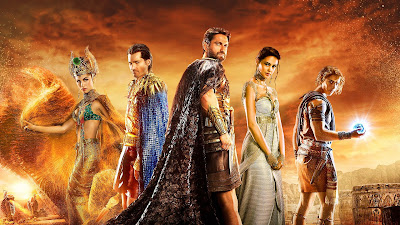 Imagine an alternate universe in which nine-foot-tall gods live amongst men and bleed gold instead of red. Imagine a universe in which Gerard Butler can morph into a platinum-plated megazord and face off with a one-eyed Jamie Lannister (who, incidentally, can morph into a falcon). Geoffery Rush defends a flat Earth against a giant Chitauri that wants to eat it whole. Chadwick Boseman can be in a hundred places at once. This is the world of Gods of Egypt, director Alex Proyas’ bombastic ode to ancient myths that is not content with just going over the top; it must furiously hack it to pieces with a flaming sword. It’s campy, incoherent, and shot almost entirely on green screen. While that might normally be a cinematic death sentence, those looking with the right kind of eyes will recognize a brand of brilliance in the film, a reckless abandon of the highest order. It has no illusions about itself; its only goal is to entertain us, and for that, it deserves our attention.

Horus, the God of Air (Nikolaj Coster-Waldau) is ascending to the throne of Egypt before an endless sea of mortal men and women. Various gods come to pay tribute, including Osiris (Bryan Brown) and his brother, Set (Butler). Fueled by Scottish rage, Set suddenly betrays his family by murdering Osiris and stealing Horus’ eyes. He claims the crown for himself and sets about enslaving the mortals of Egypt, including the lowly Bek (Brenton Thwaites) and the preposterously-out-of-his-league Zaya (Courtney Eaton). They spend a year in captivity until Bek breaks into the royal archives to steal back Horus’ eyes and the plans to Set’s Pyramid of Death. Zaya is then killed, prompting Bek to quest his way to Horus and convince him to fight back against his uncle. Horus promises to help return Zaya to the land of the living if Bek helps him restore order to the galaxy. Many, many more things happen after that, but the idea is that there is a hero and a sidekick and a few buxom princesses and everything is well on its way to being amazing.

Because, again, Gods of Egypt is too busy unleashing man-eating cobras and dropping mountains on Gerard Butler to worry about the how or the why. The film simply never stops putting its surprisingly-charming heroes through trial after poorly-animated trial. With all due respect to those who protested yet another Hollywood whitewashing of brown characters, this is not the right hill to die on. This is pure fantasy, an arch and operatic video game that is in no way meant to resemble actual Egypt or actual Egyptians of any period in history. The laughably-convoluted story makes up the rules as it goes along and develops characters only so far as they are necessary to the plot, but you’re not going to care enough about that to get sidetracked by the logic. Every actor in the film looks like they’re having the time of their lives; Butler and Coster-Waldau clearly knew what movie they signed on for, trading quips and jabs like old pros and laughing like pigs in shit the entire way. Grab a snack, sit back, and follow their lead.

“It was an audition. You got the part.” 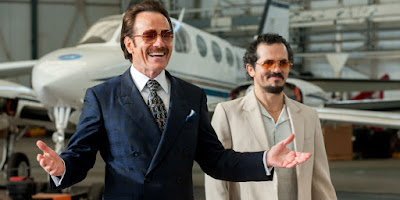 Robert Mazur (Bryan Cranston) is a U.S. Customs agent in 1980s Miami. He wears wires, busts drug dealers, and then goes home to his wife and kids. It’s a tough gig, but he’s clean until retirement as long as he compartmentalizes his work life from his life life. That is, until he forgoes that retirement for a chance to work on the biggest bust of his career: Pablo Escobar. To get him, he’ll have to blur all the lines between identities. He’ll have to become someone entirely new, someone who can walk and talk like a professional money launderer. But what happens when that life becomes more stable and gratifying than your real one? What happens when you realize you actually like these criminals, that you trust them and want them to trust you? That walk and that talk start to become your walk and your talk, so much so that you can’t even remember who you used to be. It’s in that moment that you make a choice: which life do you live?

The Infiltrator is a fine film. It’s shot well, with good, reliable performances from people like John Leguizamo, Benjamin Bratt, and Diane Kruger. Bryan Cranston is once again playing with the line between good and evil and finding himself unsure of which way to go. Brad Furman clearly knows how to make big, important movies about big, important things. It is a competent and efficient piece of work. But it has no soul. It has no heart. It’s a character piece without a character, a personal story without a personality. It has so many things to say about identity and intimacy and yet somehow manages to hold us at a distance; we never quite understand who Mazur is before this whole ordeal, which makes it harder to track who he becomes as it progresses. We may consider that part of the game, a kind of meta-commentary on the relationship between audience and character, but that may also be overthinking it. Something intangible and important is lost between conception and delivery. Still, that delivery is subtle and thought-provoking, building to a climax that hits home thematically. There’s just not that much tension or excitement. Whether or not that matters is kind of up to you. 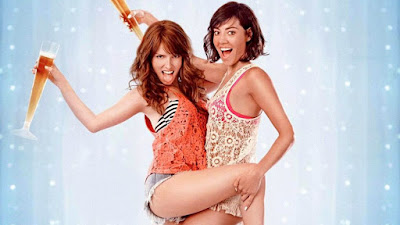 Author’s Note: Look. You guys know how much I love Anna Kendrick. I watched this for her. I finished it, too, which makes me way dumber than Adam Riske. Anyway. I’m here to do a job, so let’s get started:

Mike and Dave (Adam Devine and Zac Efron) are Dude Bro Slackers who party hearty and scream a lot. Their parents (Stephen Root and Stephanie Faracy) harsh their buzz by demanding that they not act like assholes at their sister’s upcoming wedding. For reasons passing understanding, they decide that the only way this will happen is if they bring dates along. Enter Alice and Tatiana (Anna Kendrick and Aubrey Plaza), a male screenwriter’s fantasy of female friendship. They show up drunk to their waitressing jobs because that’s what Hot Messes do. They call each other “dude” and spill cereal all over their hovel of an apartment because apparently that’s relatable. They con the boys into choosing them as dates because all four of them are stupid and this movie hates you.

The subterfuge continues in Hawaii, where the girls try to maintain the illusion of competence while getting shit-faced and slipping the bride the occasional upper. This is the part that should be funny, the part where the boys try to compete with a pair of hellcats even wilder than they are. Maybe there could be some gamesmanship that pulls them off the straight and narrow and forces them to accept how destructive their behavior has been all this time. Maybe we could build arcs and develop them into characters. Instead, we get a pretty funny scene where Kumail Nanjiani rubs his naked butt against someone else’s naked butt. There’s also a scene where Aubrey Plaza digitally stimulates another girl for Rihanna tickets. Oh, and a scene where Anna Kendrick trips balls and gets naked with a horse! It’s kind of remarkable how aggressively naked this movie is.

You know what? You don’t need to read this. You already know whether or not you’re going to watch Mike & Dave Need Wedding Dates, but you should also know that Adam Devine does things with his face that will make you really concerned for his gastrointestinal health. Aubrey Plaza shows us what her Parks & Recreation character April Ludgate would be like if a meth lab explosion robbed her of intellect and impulse control. Efron and Kendrick continue to be egregiously overqualified for the vast majority of their roles (though there are a few moments here in which they actually resemble human people, which is nice). The rest is standard studio comedy fare: four hours of improv cut down to ninety minutes. Fish are out of water. Jurassic Park references are made. One girl is gay, and the joke is that she’s gay. If that’s your bag, this one’s for you.
Posted by Patrick Bromley at 12:00 PM