I used to love going the movies. I’m not sure that I do now.

For years, movie theater chains have been trying to figure out how to please their customer base. With an addition here and an addition there, theaters have become almost unrecognizable compared to just ten years ago. It’s my opinion that they’ve gotten much worse, and not for reasons like rising ticket prices or chatty moviegoers. It’s gotten to the point where it takes actual effort to seek out and find a “missionary” (i.e. normal) presentation of a movie. And that sucks.

Last week I went to my neighborhood theater to see Ouija: Origin of Evil. I hadn’t been to that theater in two months and I had heard they went through some refurbishments. I was curious, so I walked over for a movie. The theater has been one of those dine-in places for years, and while I was not a fan of it initially, I’ve grown used to it over time. As I headed into the auditorium, I noticed a sign near the door that said that to purchase food I should now go to the concession stand. No big deal, so I did. They had a dinner menu in addition to concessions, so I ordered a burger. Keep in mind I came about 20 minutes before my movie started. They gave me my drink when I paid, but for my burger I got a pager that would go off when my food was ready. They instructed me that when my pager went off I should go to the lobby and someone would walk over and bring me my food. I thought that was weird, but ok. My pager then goes off five minutes after the actual movie starts (not the previews) and I had to miss part of my movie as a result. Plus, the pager lit up like a Lite Brite and started audibly buzzing while in the darkened theater. I felt terrible. That’s so distracting for anyone around me. 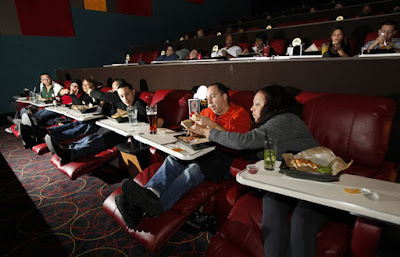 My point with this story is that in the interests of innovation I think theaters are tone deaf to moviegoers' convenience. The food service is an annoyance, especially when you have to pay a bill during the third act of a film. But it’s not just that. There’s reserved seating (which people can’t seem to figure out despite there being reserved seating at things like airplanes, concerts, sporting events etc. for decades), 3D, IMAX, D-Box and so on and so forth. About the only addition I like are the recliners. It’s just getting to be too much. I’m exhausted when I even think about going to a movie these days. I still do, but I’ve noticed not as often anymore.

One more story, and this is more a personal gripe than anything. Have you noticed that every AMC Theaters location is beginning to look the exact same way? There used to be some variance, but now it’s become this mass homogenization. Everything’s red and the theaters are in these weird cube looking things that only seat a few dozen people instead of hundreds like before when it was stadium seating. It’s not the end of the world, but it doesn’t feel like a movie theater anymore. It’s more like being in a gumball machine. This all seemed to start when AMC introduced those talking AMC Amazing dots during their pre-show. I’m now realizing that was when they stormed the beach. Now they’ve won the war. We’re full dot. 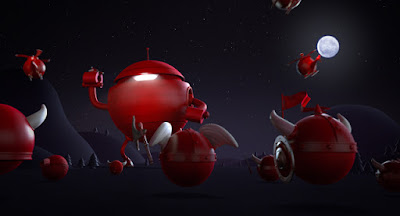 I’m aware this column is coming across as Make Movie Theaters Great Again, but it’s a festering feeling I’ve had that I felt like writing about. I miss that movie theaters individually used to have personality, from their décor to their curation. Now every movie theater plays the same ten movies and they all are beginning to look the same. As a frequent moviegoer, that’s a bummer. It’s like if all of a sudden radio stations decided only to play today’s pop hits. And don’t get me started on so-called indie theaters. Most of the time they play mainstream films in half of their auditoriums and keep true indies for about a week, virtually giving them no shot to break out via word of mouth. Shit just is real corporate and that bums me out. What’s the point of having a movie theater if you’ve “improved” it to the point where people who love movies don’t want to go there anymore? I’m sure I’m not alone in this feeling.

Am I crazy or has going to the movies gotten a lot worse?
Posted by Patrick Bromley at 5:00 AM