This film is like a comfortable pair of slippers… or a delicious cup of hot cocoa… if slippers and cocoa were hilarious and had a bunch of books written about them. 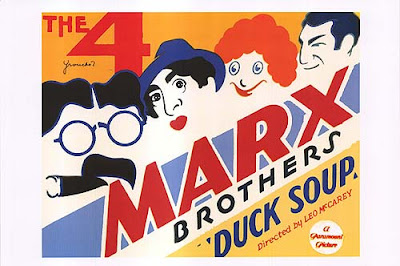 When your pontiff was just a wee little Popeling, Chicago’s WGN showed Duck Soup every New Year’s Eve. One of my earliest and most vivid memories involves visiting my grandfather’s place on that holiday; his two-flat was full of boring adult talk, but my beloved Uncle Tony took pity and allowed me to watch television upstairs in his apartment. That was the first time I saw Duck Soup. It was like nothing else I had ever seen and boy, did it make me laugh! I have noticed that Turner Classic Movies often shows Duck Soup on New Year’s Eve. Is this a nationwide tradition that I was not aware of as a child, or did the TCM programmers also grow up in Chicago and are now trying to relive the past? For more than 30 years, the original theatrical poster for Duck Soup has hung in my classroom. Maybe I too am trying to relive the past.

The Plot In Brief: Rufus T. Firefly (Groucho Marx) is installed as the new president of Freedonia, but only because rich Mrs. Teasdale (Margaret Dumont) demands this in return for loaning the country more money. Trentino (Louis Calhern), ambassador from the neighboring country of Sylvania, is interested in starting a war with Freedonia. Trentino hires two spies, Chicolini (Chico Marx) and Pinky (Harpo Marx), to gather incriminating evidence against Firefly and discredit him with the Freedonian people. Will Firefly be a successful president? Will Mrs. Teasdale be a successful love interest? Will Chicolini and Pinky be successful spies? Will all hell break loose? 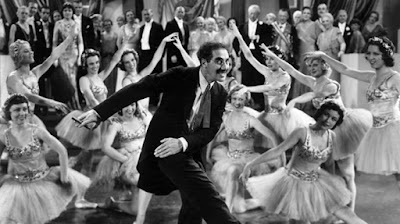 The Pope has read many books about the Marx Brothers. (The best ones are The Marx Brothers Scrapbook by Richard J. Anobile; Monkey Business/Duck Soup in Lorrimer’s Classic Film Scripts series; and Groucho, Harpo, Chico, and Sometimes Zeppo by Joe Adamson.) The Pope certainly hopes (#PopeHope) that the recent publication of three MORE books on the Marx Brothers proves they will not be consigned to the trashcan of history any time soon. Hail, Hail Euphoria! by Roy Blount, Jr. is a robust appreciation of Duck Soup as a war film—a delightful, tiny book and a fast read. Two much more scholarly tomes are Four of the Three Musketeers: The Marx Brothers on Stage by Robert Bader, which chronicles their early stage careers using awe-inspiring amounts of new research; and Gimme A Thrill: The Story of ‘I’ll Say She Is’ by Noah Diamond, which chronicles the Marx Brothers’ “lost” musical, their only Broadway success never adapted into film. Christmas reading by the fire, pilgrims—your Pope is a loving Pope and knows that your lives will be improved only to the extent that you seek out these books.

In spite of this veritable library, I cannot remember any Marx Brothers book discussing Duck Soup as a musical. Its three musical numbers (“Hail Freedonia,” “Just Wait ‘Til I Get Through With It,” and “Freedonia’s Going to War”) are so delightful and funny that one wishes Bert Kalmar and Harry Ruby had made this a full-blown musical, like the Marxes’ earlier stage successes. Ironically, Duck Soup is also the only Marx Brothers film where Chico does not have an extended piano solo, nor does Harpo play his namesake instrument. 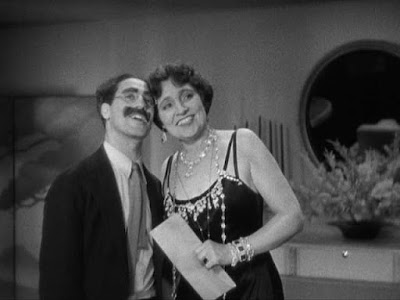 I have always thought that the brilliance of the Marx Brothers’ satire was that it was applicable to all situations and eras (era). When the USA got itself all worked into a lather during the first Gulf War—with CNN’s cameras following smart missiles right down enemy chimneys—it always reminded me of Duck Soup’s musical number “Freedonia’s Going To War,” which satirizes this peculiar national bloodlust across many nations, governments, and musical styles. I will avoid the temptation to parse out the parallels between this 1933 film and our current political situation, but good Lord, just listen to Rufus T. Firefly laying out his political agenda in a film made more than 80 years ago:

If any form of pleasure is exhibited
Report to me and it will be prohibited
I'll put my foot down, so shall it be
This is the land of the free

The last man nearly ruined this place
He didn't know what to do with it
If you think this country's bad off now,
Just wait 'til I get through with it

I will not stand for anything that's crooked or unfair
I'm strictly on the up-and-up, so everyone beware
If any man's caught taking graft, and I don't get my share
We stand him up against the wall and… Pop goes the weasel!

If any man should come between a husband and his bride
We'll find out which one she prefers by letting her decide
If she prefers the other man, the husband steps outside
We stand him up against the wall and… Pop goes the weasel! 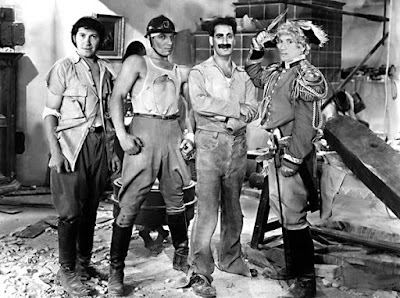 The Pope loved showing Duck Soup in his now defunct Film Studies class. Every year, the students would come into class suspicious of these older jesters and leave class loving the Marx Brothers. There is something about their humor that transcends place and time. Students used to particularly love Groucho’s ability to insult anyone and everyone, especially the rich and stuffy Mrs. Teasdale. Their favorite joke was always Groucho saying, as he tried to romance Mrs. Teasdale, “I can see you now, bending over a hot stove. But I can’t see the stove.”

CONSUMER ALERT: The recent restoration and Blu-ray release of the Marx Brothers’ five Paramount titles is nothing short of revelatory. The Cocoanuts (1929) and Animal Crackers (1930), which have previously looked and sounded terrible, are now both gorgeous (and Animal Crackers has had some lost footage restored); Monkey Business (1931), Horse Feathers (1932), and Duck Soup (1933) didn’t need as much of an upgrade, but the restorers somehow managed to make incremental improvements. As with Universal’s 2013 restoration of the 1931 Dracula, I hope the Marx Brothers restorations will spark a critical reassessment of these films—especially the earliest two, which were often held up as examples of creaky old early talking pictures. (Ever wonder why every piece of paper in The Cocoanuts is inexplicably soaking wet? That was to reduce the crinkle and crackle, which early sound microphones tended to amplify and exaggerate.) 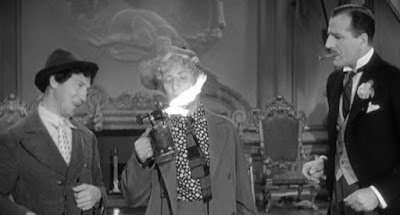 Duck Soup’s Three Miracles: The enduring, anarchic spirit of the Marx Brothers, still fresh and zippy decades later; the crazy script by Bert Kalmar, Harry Ruby, Arthur Sheekman, and Nat Perrin (who later produced and wrote for The Addams Family television series); and sharp direction that never steps on the jokes by future Oscar winner Leo McCarey. Groucho used to lament that McCarey was the ONLY first-rate director who ever directed a Marx Brothers’ picture.