Night on Earth: In the Company of Strangers 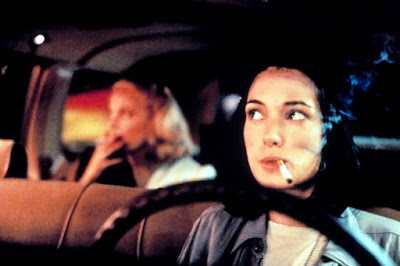 Street lamps cut through the interior of your car in 60 mile an hour flashes. In the strobing glow, your pupils dilate, you relax, and your more rigid social barriers soften. Growing up, this is where I had the most intimate conversations with my parents. I came out to my dad in a grocery store parking lot as Vermont snow fell, casting a weird yellow light on everything. I drove with my mom cross country, listening to a blend of books on tape and her life story...the earned trust made me feel like an adult. For me, there’s nothing like this brand of vulnerability. The talks you can have with strangers on a cross continental night flight or the eagerness to share secrets in dimly lit bars simply isn’t possible during the day. Evening light has a magic way of setting the stage for honesty—the physical environments and company stay the same, but as the sun dips low, the world slips into a social twilight zone.

Jim Jarmusch is no stranger to conversation; a story teller who is eager to showcase the minutiae of relationships through seemingly banal conversations, he paints vivid cityscapes of characters that play with the intimate relationships fostered after dark. In Night on Earth there is no sex or romance, but something perhaps deeper and more poignant: the sadness of missed connections and unique brand of intimacy you share with someone you know you’ll never see again.

Last winter I took an Uber home from a bar in Brooklyn. My mustachioed driver looked unbelievably like the Monopoly Man, wore a wifebeater, and talked nonstop. He told me how Brooklyn has changed throughout the years as we made our ascent to Queens, with me listening in the backseat, drunkenly doing a crossword puzzle on my phone. Somewhere between boroughs, our journey was interrupted by a woman passed out in the street. An ambulance had already arrived and we watched collect her under the flashing lights—my driver’s back hair sparkled before me. After the proverbial smoke had cleared, we drove in silence before picking up a couple who squeezed in beside me. The contrast was nothing short of surreal. The love-drunk couple whispered in each other’s ears as my driver struggled to express his feelings about the temporality of life, about how the girl’s mother will certainly cry upon discovering what happened. His monologue filtered through their smacking and carressing. ...In short, the ride was pretty awkward. We pulled up to my house after dropping off the uncomfortable pair and he told me he’d never forget our ride. Obviously, I haven’t either. 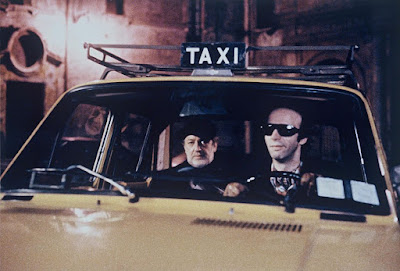 Jarmusch relies on this loneliness of city living and unlikely pairings to comment on intimacy in general. He has a conversation with the viewers through his cast of zany characters; we relate to them on levels we wouldn’t fathom, and they relate to each other in ways that seem impossible. Night on Earth is not a movie that is by any means rational. It swings between being very sweet, funny, and deeply saddening. We are given snippets of strangers’ lives, strangers we’ve all met on subway platforms or in lines at the pharmacy and are left to insert ourselves in the spaces he leaves undescribed. My interaction with the Monopoly Man Driver could have seamlessly fit into this tale, proving that although Jarmusch’s sample of life is a bit on the weirder side, it’s not too far off from what happens in cities at night.

The film traverses five cities: LA, Paris, New York, Rome and Helsinki. I’m not going to talk about all of them, because each short really deserves its own write up entirely. Instead, I’ll focus on my favorites, LA and Paris. In Los Angeles, we meet a young and very greasy Winona Ryder. Smacking her gum and smoking one cigarette after another, she is sort of a lone cowboy figure, navigating LA by herself in a dirty taxicab. After picking up a hoity toity casting agent with an impressive luggage set, Winona’s character is offered a starring role in an up and coming feature—a dream hard to pass up for many. Despite the done-up exec’s efforts to motivate Winona to want more of this life, the young girl is perfectly content following her dream of becoming a mechanic, because ultimately that’s her big fish, her dream to make real. It’s this anticlimactic failure to fulfill Cliche Big Dreams that makes this movie magic; it strips stories of their Hollywood glamour and makes them epically (and non-epically) real. A story of a spunky tomboy getting glammed up and making the big time is a dime a dozen. And also boring. 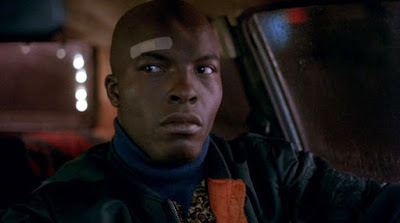 The Paris vignette is one I think about often. An immigrant from the Ivory Coast is nearing the end of his shift. After an infuriating ride with two drunken diplomats, he picks up a blind woman. Despite having just experienced a fair share of prejudice at the hands of the diplomats, he comments to himself that she probably won’t pay her fare. Immediately contradicting his assumptions, the woman engages with the driver, telling him when and where to make turns as she touches up her makeup. Fascinated, he watches her more closely than he watches the road, he interviews her, asking about her disability. He assumes so much about her life living as a blind person, similarly to how the diplomats assumed so much about him.

Patiently, however, she answers his questions about lovemaking, her experience at the movies, and we can see as the conversation goes on how he starts to regard her with a certain level of romance. Upon arriving at her destination, he tries to charge her less than her fare; in an act of charity or care or flirting, who knows. The woman, however, refuses to be infantilized and pays him more than what she owes. We see her walk away and hear the cab driver get into an accident off screen, she smiles, knowing it was because he was looking at her. We hear an argument between the drivers—heated and full of racial stereotyping. I like how again, this short backs into what we expect from a film. Had this exchange happened in any other movie, her blindness would have been romanticized, and their connection would have been something else entirely.

The anonymity of night time wraps us up like a confessional. Strangers, especially cab drivers (people we often don’t think twice about), meet countless of other strangers and share countless of awkward exchanges. Even when we’re trying to be by ourselves, in cities it’s impossible not to fumble and rub elbows with someone— consequently impacting each other’s lives. From stories we share at parties to encounters that are deeper and more important, Night of Earth makes real life slightly more beautiful, slightly more emotional, and slightly more real.