Some semi-random thoughts on the greatest Western ever made. 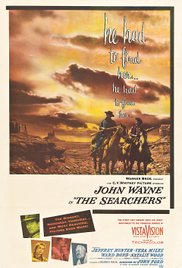 I once read that Martin Scorsese used to screen The Searchers in his NYU film class in the late 1960s, but such was the polarizing force of star John Wayne’s conservatism that many students announced their intentions to boycott the screening. Scorsese instead told students that that week’s screening was an obscure, hard-to-see gem, locked the doors once the students were in attendance, revealed he would be screening the obscure gem the next week but tonight was screening The Searchers, and assured any students walking out that they would immediately fail his class.

Scorsese wanted his students to see this film. Later, of course, Scorsese would direct what is arguably the most successful remake of The Searchers, Taxi Driver. Great art inspires other great art. 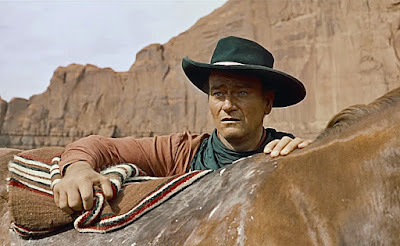 The Plot In Brief: Ethan Edwards (John Wayne) returns from the Civil War years after it officially ends. He visits the homestead of his brother, which is almost immediately besieged by a tribe of Comanche Indians led by Chief Scar (Henry Brandon). The attackers kill almost all the family members, set fire to the house, and kidnap the two youngest girls, Lucy (Pippa Scott) and Debbie (Lana Wood in the earlier scenes, but sister Natalie Wood in the majority of the film).

Ethan puts together a ragtag posse and vows to bring back the girls. Joining him are the Reverend Captain Sam Clayton (Ward Bond), neighbor Brad Jorgensen (Harry Carey, Jr.) and the young and impetuous Martin Pawley (Jeffrey Hunter). They soon discover that Lucy has been tortured and killed, but Ethan vows to continue searching for Debbie. The search winds up taking years and becomes a physical manifestation of Ethan’s utter hatred for Native Americans. Will Debbie be rescued? Would Ethan rather see Debbie dead, rather than become a bride of Chief Scar? Why aren’t all Westerns this morally complex? 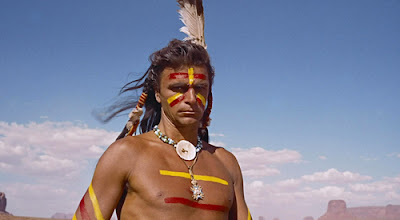 I screened The Searchers in my Film Studies class for decades, and it always turned out to be one of the students’ favorites of the semester. I think they were expecting something simplistic—the “bang bang” simplicity of childhood play. Instead, they were treated to a rousing story, superbly told; and a morally complex tale showing the corrosive effect of racial hatred; and some fun “bang bang” cowboy stuff too!

The Searchers is unique in that it does not simply use racism as a plot point or a clothesline upon which to hang easy platitudes, it is actually about racism and the effects its on the soul. Ethan is beyond being haunted by his irrational hatred of Native Americans, it is the only thing left that defines him and drives him. We see in The Searchers a theme that would become a favorite of countless other filmmakers (I’m looking at you, John Woo): that of the good guy and the bad guy being essentially interchangeable. They cannot stand each other because they recognize too much of themselves in each other. 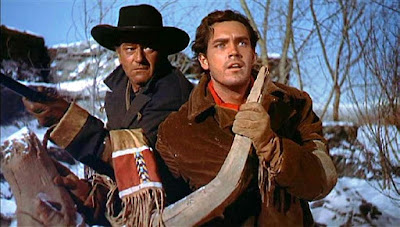 After a recent Chicago Film Critics Association screening of 1941, I asked Erik Childress and Peter Sobczynski if they thought Slim Pickens’s line, “Boy, watch that knife!” was a reference to Ward Bond’s very similar line in The Searchers. Childress said he was not sure but would not be surprised, given that Spielberg has screened The Searchers before directing every one of his films.

And of course, a young Buddy Holly sees the film during its original release, is taken with Ethan Edwards’s oft-repeated response to being challenged, and goes home to write “That’ll Be The Day.” Great art inspires other great art. 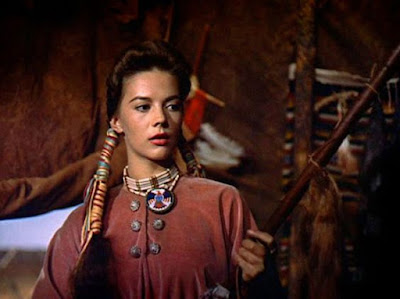 The Searchers’ Three Miracles: John Wayne’s career-best performance, brave and inevitable, like the turning of the Earth; a bountiful supply of terrific supporting performances, all of them perfectly cast; and John Ford’s exquisite direction, which never calls attention to itself. Ford was a master storyteller.