Boy, did everyone (but me) hate this film when it was originally released in 1979. I think they were angry because it wasn’t Jaws or Close Encounters of the Third Kind.

At the time of its original release, Roger Ebert gave 1941 two stars and wrote, “It's not fair to say Steven Spielberg's 1941 lacks ‘pacing.’ It's got it, all right, but all at the same pace: The movie relentlessly throws gags at us until we're dizzy. It's an attempt at that most tricky of genres, the blockbuster comedy, and it tries so hard to dazzle us that we want a break. It's a good-hearted, cheerfully disorganized mess […]”

The New York Times’ Vincent Canby hated the film. “Everything is too big,” he writes. “We don't laugh at a gigantic riot of servicemen in and around the Los Angeles United Service Organization Club. We are stunned by what appears to be the thousands of extras — enough to fill a Yugoslavian-made biblical epic […] In 1941, when a full-size, two-story house falls over a cliff, we groan at the effort[…] 1941 is less comic than cumbersome, as much fun as a 40-pound wristwatch.” 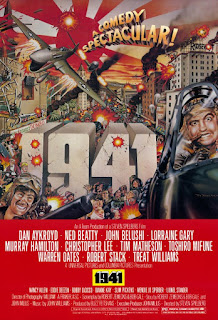 The film’s reputation has not improved much since then. A few years ago, Nathan Rabin reviewed the film for The Onion AV Club and wrote, “1941 is a lovely film with a few standout sequences but it is has one big drawback: it's just not funny. In fact it's brutally, brutally unfunny and after a while, its size and ear-splitting volume become assaultive and dispiriting.” The AV Club’s Keith Phipps also weighed in: “When a ventriloquist's dummy (approximate cost: $40) has nearly all of a multimillion-dollar film's funniest moments, something has clearly gone wrong.”

To say these critics—all of whom I actually read, like, and admire—missed the point is an understatement almost as massive as the scale of 1941. Every example they throw at the film to besmirch its greatness I would use as evidence to prove its greatness. The size is the joke. The relentlessness is the joke. The dizziness and messiness is the joke. Canby suggests that Spielberg wants the audience to be stunned by the film’s scope—yes, he does. This is a film that grabs me, and pummels me, and refuses to let me go until I laugh. Well, guess what? I LIKE TO LAUGH. So I do. I laugh a lot at this movie. Thanks, 1941! 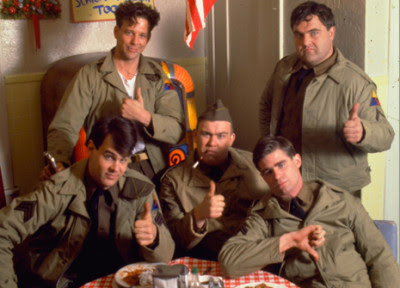 I liken 1941 to one of my favorite comedies, It’s A Mad Mad Mad Mad World, another film in which all hell breaks loose and the size of the whole damn thing is the point. 1941 is an album of astounding images: an unmoored Ferris wheel careens down a pier and lands in the ocean, sailors and zoot-suited hipsters stage an epic brawl to the strains of swing music in a USO dance hall, a two-story house tumbles down a cliff, and an aerial dogfight swoops over Hollywood Boulevard—Buster Keaton would be proud.

Funny throwaway lines abound. At one point, Aykroyd’s character is hit on the head quite hard; he pulls a lady’s nylon stocking over his head, shoves two oranges over his eyes and two pencils into his mouth and commences to scream, “I’M A BUG. I’M A BUG!” When Penny Marshall’s Miss Fitzroy asks Dance MC Joe Flaherty his real name, he pauses and replies, seductively, “Raoul Lipschitz.”

Now, I know that comedy is subjective. I am not even suggesting that Spielberg has any affinity for comedy. He doesn’t. Still, one of the funnier throwaway gags in Raiders of the Lost Ark (the film Spielberg directed right after 1941)—the scene where the bad guy produces what the audience assumes will be an instrument of torture, but which turns out to be a folding hanger for his coat—was scripted and filmed for Christopher Lee’s character in 1941, but did not make the final cut.
Although critics should never approach a film by discussing its budget, I think many critics at the time were just doing that with 1941. Canby in particular seems to take personal issue with the film’s size, as if any cost overruns were coming out of his own pocket, or he was being charged a pro-rated ticket fee based on the film’s budget. This makes no sense. Critics get in free! However, if the film gave him a headache, I certainly can’t argue against that. Maybe he has a sensitive head.

Because 1941 followed on the heels of National Lampoon’s Animal House and because John Belushi’s image as Wild Bill Kelso was used so heavily to market the film, I think a majority of the film’s original audience (critics included) were disappointed that he isn’t in the film all that much. I believe Ebert pointed out that Belushi only has something like 27 lines of dialogue in the entire film. I also believe many people were disappointed that Belushi had no scenes with Aykroyd, as the two had been a sensation together during several seasons on Saturday Night Live. 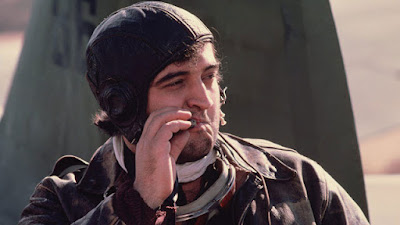 But that’s okay—the rest of the huge cast makes up for it. Although Gene Siskel’s famous edict that a film should be more entertaining than having lunch with its cast might be true in the case of 1941, said lunch would require a mighty big banquet hall. My God, just look at this list: Dan Aykroyd, John Belushi, and Tim Matheson (all from Animal House); Nancy Allen, Wendie Jo Sperber, Bobby DiCicco, and Eddie Deezen (all from the previous film from screenwriters Bob Gale and Robert Zemeckis, I Wanna Hold Your Hand); Lorraine Gary, Murray Hamilton, and Susan Backlinie (all from Spielberg’s Jaws); plus Ned Beatty, Christopher Lee, Toshiro Mifune, Warren Oates, Robert Stack, Treat Williams, John Candy, Patti Lupone, Slim Pickens, Michael McKean, David Lander, and Mickey Rourke in his film debut.

This film has so many star cameos that, though I have seen it at least a dozen times, I have never noticed James Caan, Sydney Lassick, or John Landis—although, based on sources, ALL of them appear in this film. I do know that when the USO fight breaks through a window, spilling the fight into the restaurant next door, the old man impassively eating pasta is also John Belushi. 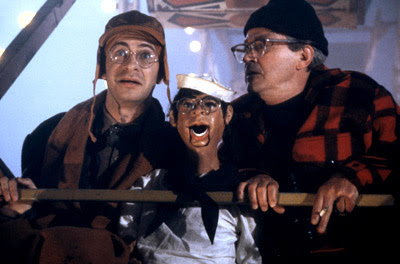 Universal’s new 4K restoration Blu-ray disc is the best this film has ever looked and restores more footage than their previous “director’s cut” release. (That means there is more to love!) What keeps this film from looking really razor sharp, however, is Spielberg’s insistence on blowing smoke (literally) through (virtually) every scene, which gives much of the film a hazy, unfocused quality. On the great “making of” documentary included here, the cast members interviewed cannot agree on much regarding this misunderstood film, but they all remember hating all that stinky smoke.

Smoking is bad for you, babies. But a movie that’s willing to throw a house off a cliff just to make you laugh? One has to applaud that kind of effort. Don’t be a fuddy-duddy like Vince Canby—give in to the chaos of 1941.