Off the Shelf: Student Bodies / The Sender (Blu-ray) 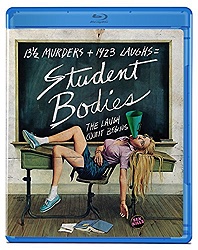 The original tagline for the 1981 slasher spoof Student Bodies boasts "At last the world's first comedy horror movie." This is a true statement only if we ignore the existence of Abbott and Costello Meet Frankenstein. Or Young Frankenstein. Or The Raven or The Comedy of Terrors or The Cat and the Canary or A Bucket of Blood or a dozen other horror comedies. Now, Student Bodies may be one of the very first horror spoofs, which is a very different thing and a much, much smaller subgenre. There are a lot of great horror comedies. There are very few good horror spoofs.

Kristen Riter plays Toby, a student at Lamab High School, where the students and teachers are being targeted by a slasher known as "The Breather." That's pretty much it. If it doesn't sound like much plot for a comedy, that's because it's spoofing early '80s slasher movies, which had precisely as much plot as this one does. There is a killer, there is a Final Girl, there is a collection of potential victims and there are red herrings and horse head bookends galore. 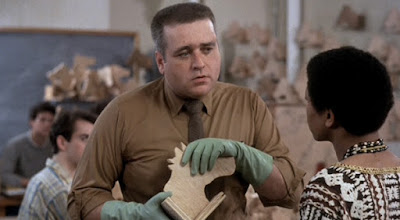 Every time I revisit Student Bodies, I have the same reaction: for the first 30 minutes, I'm astounded at how funny the movie is and convince myself it's one of the more underrated comedies of the 1980s. Then the remaining 60 minutes let most of the air out of the movie and I remember that getting through the whole thing is actually kind of tedious. The jokes, which come fast and furious for the first half hour, slow down and begin repeating themselves: while the onscreen body count is a good gag the first few times, it can't sustain itself into double digits.

And yet it cannot be understated how ahead of its time the movie is, lampooning a genre that was at this point only in its infancy. This is a movie doing the Scary Movie series 20 years before the Wayans brothers did it. And in many ways, Student Bodies is more clever than the Scary Movie cycle because it's not just referencing specific entries in the genre, but rather having fun with identifiable tropes. The joke is that what is true of Student Bodies is true of all slashers of the period, whereas the Scary Movie model is much more about "Hey, remember Current Horror Movie X? Well here is something to remind you of that movie!" I prefer the Student Bodies approach. It assumes you have seen a lot of movies instead of just the few specific titles it requires you to have seen.

There are still enough big laughs even during the last hour of the film to make Student Bodies a fun and somewhat groundbreaking horror spoof, and what's better is that the laughs can come from anything. Writer/director Mickey Rose (working alongside uncredited writer/director Michael Ritchie, who had a big hand in this one) isn't afraid to do anything for a laugh, meaning there are just as many highbrow jokes that deconstruct genre as there are lowbrow stupid gags of someone falling down or knocking something over (there are shades of Wet Hot American Summer, believe it or not). I'm not above laughing at either one. 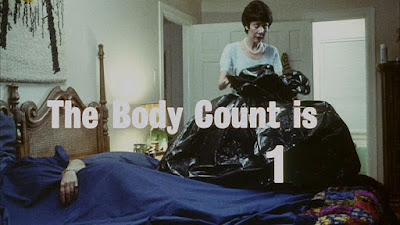 Previously available on Blu-ray as a double feature with Jekyll & Hyde Together Again, Student Bodies now gets a standalone release from Olive Films. The 1080p HD transfer is uneven; I don't know whether or not Olive used the same transfer from the Legend release, but it suffers from digital noise and inconsistent sharpness. The colors are drab, but that's just how the film was shot -- it has always been fairly cheap and ugly to look at. There are no bonus features included on the disc, not even a trailer. 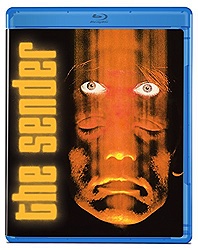 Considerably less funny than Student Bodies -- and intentionally so -- is 1982's The Sender, directed by Roger Christian (who would eventually go on to direct Battlefield Earth). It stars professional creepy guy Željko Ivanek as a young man who, as the movie opens, is attempting to drown himself on the beach. He is rescued and hospitalized, where he is given the name John Doe #83 and begins working with a therapist (Kathryn Harrold) who wants to help him. It is gradually revealed that John Doe -- the "sender" of the movie's title -- possesses psychic ability and can send the visions of his own nightmares into the minds of others. Naturally this causes problems.

I've seen a lot of horror movies. I've seen a lot of horror movies from the '80s. Somehow, though, I had never seen The Sender, a 1982 horror movie with a somber Dead Zone vibe and the psychic hook of Carrie. There's a bit of De Palma in the execution of the movie, primarily in the showcase sequence in which John Doe psychically blasts a team of doctors during electroshock therapy and sends them careening across the room in horrifying slow motion right out of The Fury. It's more psychological horror than anything else, with even the few moments of visceral violence that take place appearing as a hallucination and not something that's actually taking place. 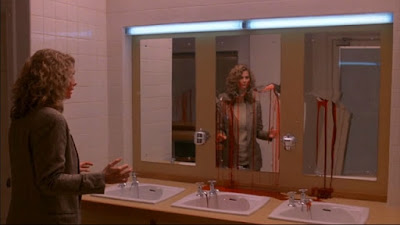 Often times when I catch up with a horror film I missed all these years, my reaction is either "This is a crazy film, how did it escape me?" or "This is garbage and I wish it had escaped me." My reactions to The Sender are much more rare in that the movie is solid and adult in a way that other genre films of the period usually aren't. The '80s were the decade of rubber monsters and masked slashers, but The Sender feels like more of a holdover from the late '70s, just before horror films exploded with the possibilities of makeup effects. It is slower and quieter, more thoughtful. It doesn't all work, but I can appreciate the effort in spite of the flaws.

The deeper into the film you get, the more tragic it eventually becomes. This isn't the kind of horror that revels in its horrific aspects; even when John Doe unleashes his powers, there's none of the "isn't this cool?" factor that so often leads us to the genre. It's always a tragic occurrence because he is a tragic figure, one who knows he is a monster and doesn't want to use his powers or hurt anyone. We discover that his mother (Shirley Knight) is largely responsible for making him what he is -- again, shades of Margaret White -- and suddenly the movie is informed by the idea of a stolen, shattered life. John Doe isn't just a guy who seeks to destroy himself, but a guy who understands that his very existence is a crime against nature. He breaks our hearts.

The film looks good on Olive's Blu-ray. The '70s-inspired color scheme is retained, detail is decent and only a few signs of the movie's age are visible. Unfortunately, there are no bonus features -- a regular occurrence with Olive titles that I hope begins to change, especially with the number of good films they're putting out these days. 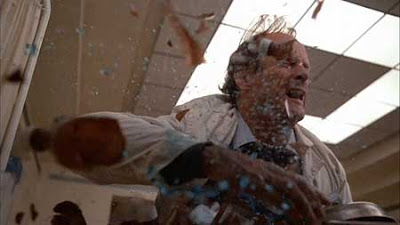 We're just over a month away from #ScaryMovieMonth, and while I don't think that either The Sender or Student Bodies are mandatory viewing this October, I do think both films offer something different enough inside of the genre to offer some temporary respite from the sameness of so many horror movies. The more horror films we see, the more necessary it becomes to dig deeper and find smaller, more obscure titles we might otherwise have missed. Thankfully there are home video companies like Olive Films doing some of that work for us.