Going to the movies is a communal experience. When it’s a solitary one, sadness follows.

• I saw Sully at a Thursday night show at 10pm. The only people in the theater were myself and a man who made a lot of noise fishing around a plastic bag. I’m presuming he brought candy or something with him. At one point, he exclaimed “YES!” when something stirring happened in the movie. It wasn’t really loud, but when you’re in a theater of two you can really hear anything. My experience seeing Sully made me think about my own life and how I’m probably only a few years away from myself shouting in the dark without some drastic life changes. I thought about the girlfriends I turned away in my 20s and how even if they wouldn’t have worked out, I could have had one or two divorces under my belt by now. In the end, I don’t care how many souls Sully saved because he didn’t save mine. 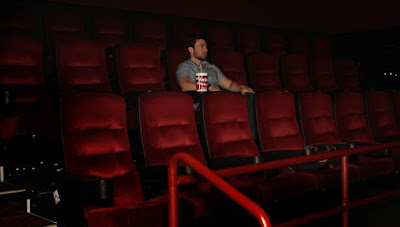 • I went to a theater with assigned seating on a Thursday night to see Inferno. The movie had been out for a few weeks so it wasn’t very crowded. It also wasn’t crowded because it was Inferno. When I got into the auditorium about 15 minutes early, it was empty. Then as the previews started, a smattering of people started to come in. Two of them sat in the same row as me with just a one seat buffer. The rest of the theater was hundreds of empty seats. So, I ask, why did they decide they wanted to sit so close to me when they could have had more personal space? Did they just not look closely at the seating chart? Were they swingers looking to add a third party?

• I was the one person in America that saw Billy Lynn’s Long Halftime Walk. I was there opening day for a 10am show and showed up around 9:40am. The theater did not open its doors yet, so I was standing out front waiting for someone to let me in. That’s always depressing. It feels like you’re a drug addict and you’re waiting outside to get your fix. I get in the theater and notice I’m the only person there to see this movie. As 10am rolls around, a greeter enters the auditorium. You see, I was at a chain where before every show a theater employee comes in and does announcements. The greeter says “Good morning” which I said back to him. Then he goes “Welcome to Billy Long’s Halftime Walk.” After that, he mentions that even though I’m the only one in the theater I should please refrain from using my cell phone in case anyone else comes in during the previews. I chuckled because I thought he was kidding. He was not kidding. He also told me that I am free to walk around the lobby to see what other movies are playing and that the bar is open if I wanted to get a drink (it was 10am so I did not go to the bar). He closed by saying “Enjoy Joe Lynn’s Halftime Walk.” The movie that followed was weird too. So maybe the greeting was an appropriate primer for things to come. 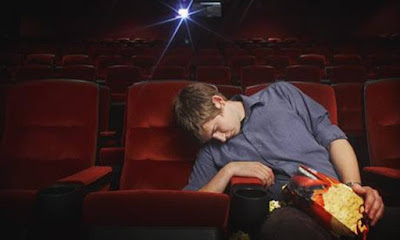 1) You’ll need to make some noise, e.g. clearing your throat or something to effect. It’s eerily quiet. It’s similar to how if you’re at home alone all day and you notice you haven’t spoken and you force yourself to say “French Bread Pizza” or something equally ridiculous just to have something to say out loud.

2) There is nothing scarier than being in a movie theater by yourself and having someone else walk in mid-way through the film. Your mind immediately goes to “how do I protect myself if they try to kill me?”

3) During the 1st half of a movie by yourself it’s fun, like being in your own version of Home Alone. But then around the midway point I, at least, feel sad and just want to go home. I teared up at the end of Rules Don’t Apply and not because of anything in the movie. It was as the credits rolled and Lilly Collins sang the title song from the movie. It’s so melancholy that it made me (again) reflect on my own life. Do the rules not apply to me? Am I a special snowflake? Where are my cyanide capsules? It was all very sad. 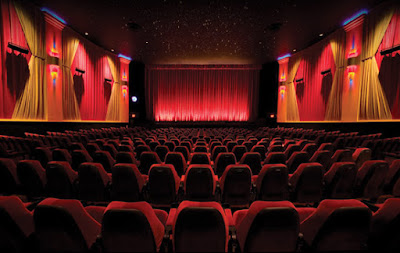 In closing, if you’re the only one in the theater, just turn around and see something else or get a refund. Otherwise, you’ll need to get an ice cream on the way home to chase away the sads.
Posted by Patrick Bromley at 5:00 AM