Standing in Your Doorway: Spider-Man 2 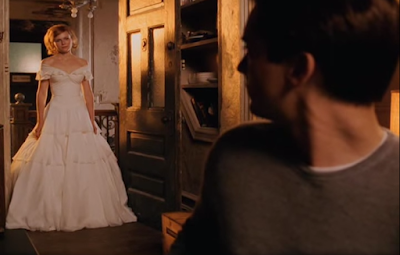 Film Crit Hulk has a general maxim for screenwriting: “the end is the conceit.” Essentially, a film’s climactic beats should be more than just the resolution of the story; they should be the culminating point of whatever theme or thesis the film is trying to sell. Think about Sarah Connor driving into the storm or Tony Montana being cut down in a hail of gunfire. Think about “I’m finished!” or “We must not allow a mineshaft gap!” They’re great lines and striking visuals, but they’re also the moments that put the ninety-plus minutes that preceded them into a larger, more resonant context. They’re calls to action, morals of the story. It seems like a simple enough thing — why tell a story if you’re not making some kind of point? — but too often people, you know, do that. But a film doesn’t have to be artsy-fartsy awards bait to be an intellectual exercise; trashy exploitation and big-budget crowd-pleasers can be just as profound as anything else. Take Sam Raimi’s Spider-Man 2, the greatest superhero film ever made.* 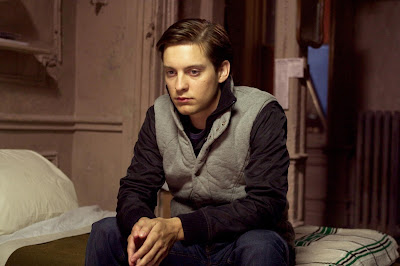 Peter Parker (Toby Maguire) is in a bit of a funk. His best friend Harry (James Franco) hates him, his aunt May (Rosemary Harris) is bankrupt, and his responsibilities as Spider-Man are keeping him out of the sweet, sweet embrace of Ms. Mary Jane Watson (Kirsten Dunst). His rent is late. His paper is overdue. He can’t even deliver pizza correctly. He’s keeping so many secrets from those he loves that it’s getting difficult to re-member why he became Spider-Man to begin with. It’s in this moment of need that Dr. Otto Octavius (Alfred Molina) urges Peter to think of his abilities as a gift to share with his fellow man rather than a burden to bear all alone. When Octavius goes bad and threatens the city with a mad science project, Peter learns to refocus his energy and finally lets go of the weight he’s been carrying all this time. When he does, he finds that his real strength comes with a clear conscience and the love and understanding of those around him. More importantly, he discovers the sweet, sweet embrace of Ms. Mary Jane Watson.

Spider-Man 2 doesn’t just give us a villain that actually matters; it gives us a capable and intelligent Female Love Interest with real efficacy. Of course she’s damseled to an extent (she spends a lot of the last act hanging pants-less from rafters), and that’s not great, but she’s redeemed in the end when she brushes off Peter’s self-involved White Knight bullshit and makes a decision for herself. She won’t be protected. She won’t be ignored. She won’t let someone else choose her destiny for her. If the man she loves is Spider-Man, then she will love Spider-Man, too. But it’s hardly perfect: evoking The Graduate, Raimi gives Mary Jane a final moment alone to reflect on her decision, and we learn Spider-Man 2 has far more on its mind than “love your family and it’ll all be okay.” That love costs, it turns out. That love is dangerous and uncertain and holy shit did I really just give up crazy astronaut sex and Thanksgiving dinners with J.K. Simmons for a broke photographer who just discovered Henry Wadsworth Longfellow? 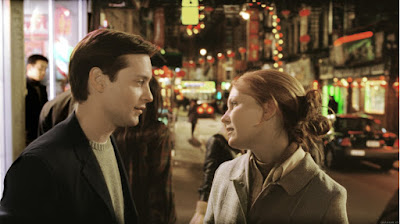 Because, again, the end is the conceit. Peter is still failing college. Aunt May is still being evicted. And does J. Jonah Jameson know Peter stole his son’s girl? That’s going to be awkward. Anyway, the point is that Mary Jane’s dramatic gesture evokes the same trust and shared responsibility that defines Peter’s arc throughout the film. The people in his life are stronger when he trusts them with the truth: Aunt May finally gets some closure and decides to pack up and move on after Peter confesses his role in Ben’s death. The people on the L-Train line up to protect him (and swear not to tell anyone what he looks like) when they realize he’s just a kid in a suit. Doc Ock finally sees the monster he’s be-come when Peter reveals his identity in his last moments. He lets go of that same single-minded obsession that drove Peter to give up the Underoos (symbolized by those creepy raptor arms that whisper things to him) and decides to honor the man he was when he was part of a loving family. Even Harry is affected by Peter’s revelation. It sends him into a tailspin toward insanity and evil, sure, but it’s better than being stuck in perpetual angst.

Spider-Man 2 is a great superhero film because it examines the very meaning of super-heroism. It argues that no super-person (or any person, really) can exist in the space be-tween two mutually-exclusive identities; neglecting one will always weaken the other. More than that, it argues that we’ll never truly connect with the people in our lives unless we let them share our burdens. It’s a masterful threading of theme, character, and plot, as well as a powerful metaphor for the growing pains of new adulthood. Going out into the world alone is a terrifying proposition that’s made all the worse by the complexities of clandestine crimefighting. There needs to be a balance: Spider-Man can’t exist without Peter Parker, and neither of them can exist without the sweet, sweet embrace of Ms. Mary Jane Watson. “It’s wrong that we should only be half-alive, half of ourselves,” she says, freeing Peter from a life lived in segments that never connect. They’re both free, in a way, rushing head-first into an uncertain future.