Thanks for Everything, To Wong Foo 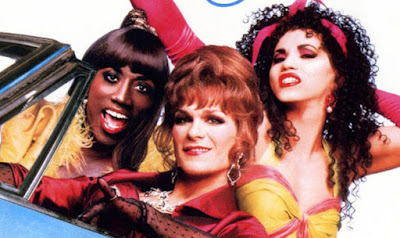 Oof. These last few weeks were the un-fun kind of drag.

It’s only been a month. And what a fucking month it was. I cried a lot the Tuesday night of the 2016 election, tossed and turned after the announcement, and moved through Wednesday leaden, tearful, and full of anxiety. My commute through Midtown the morning after we elected The Worst Candidate Ever into office was eerily silent...not something Times Square is famous for. The weather was cold and gray, as if it, too, was full of grief and disappointment. And while I think shutting down and not being present, not fighting for what is right, is incorrect, I do want to take some time—about 100 minutes runtime—to disappear into one of my favorite movies of all time, a feel-good movie that celebrates women and queerness and people of color. Sure, it's far from a masterpiece, and it's saccharine Drag Queen fairy tale is oft criticized, but guys please humor me, I just really want to talk to you about To Wong Foo, Thanks for Everything! Julie Newmar. 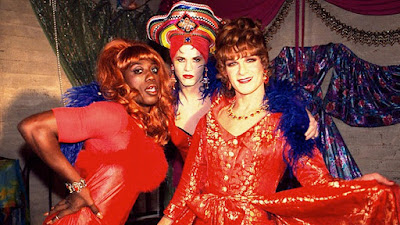 To Wong Foo, directed by Beeban Kidron, is a story of loving oneself, loving others, and kicking ass in a pair of heels. Released in 1995, the movie was special because for once, the characters were out and proud queens whose stories don’t end in tragedy. Everything about the movie is packaged neatly in a set of clear plastic pumps and eager to decorate even the most modest of abodes. Admittedly, the plot is thin, and the action, predictable. But whenever I'm blue, curled up on the couch sipping peppermint tea from an owl-shaped mug, predictable is exactly what I crave. In what I would say is the most perfect opening credit sequence, we meet Vida Boheme (Patrick Swayze) and Noxeema Jackson (Wesley Snipes) primping and prepping to absolute perfection, a stripped down version of Salt-n-Pepa’s “I am the Body Beautiful” sets the scene: you’re absolutely gorgeous don’t you know? So...you got the body beautiful glow.

We then find ourselves in a pageant of epic proportion: to crown New York’s own Drag Queen of the Year. Sequins, sashes, leather, chains and studs: this is no Miss Universe of Trump’s making, it’s a parody and homage to beauty and gender. Vida and Noxeema are then crowned—tied for the lead—by last year’s winner (played by the lovely Rupaul) Miss Rachel Tension. The queens, leaving the celebration stumble upon a greener contender: Chi Chi Rodriguez (John Leguizamo). Disillusioned by the contest and her loss, Chi Chi is sitting in front of the recently crowned royalty’s dressing room crying. In an act of charity, Vida convinces Noxeema that the three queens should travel the country together, and take young Chi Chi under their wings. 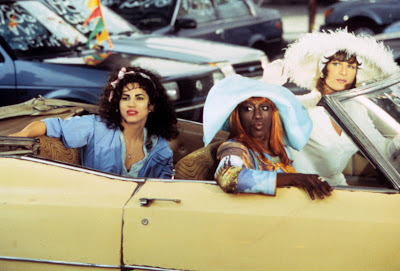 And so, their fabulous journey begins. In a broken down Cadillac (style over substance, ladies) the trio leave New York for the west coast. Dubbing Chi Chi a Drag Princess, the queens make their way westward and also share the secrets of true Queendom, so Chi Chi may one day graduate to being a “big ol’ queen,” herself. In the midst of a trip going surprisingly well, things take a turn for the worse. Outside of Snydersville, the trio get pulled over by the racist, sexist, homophobic (sound familiar?) officer Virgil Dollard (Arlis Howard), who tries to assault Vida, grabbing her *by the pussy*. This scene also features one of my favorite exchanges in cinema history:

Virgil, coming onto Vida: "I know what you want. Do you know what you career girls want?"
Vida, trying to end conversation with a total dingdong: "...Careers?"

With a big shove, Vida throws him to the ground—knocking the pig unconscious. The queens fear they’ve killed Dollard, and frantically head for the hills, gaining only a few miles before the Cadillac gives out on them, too. These queens can’t catch a break at all. Chi Chi, annoyed by Noxeema’s and Vida’s constant apprehension to appeal to the Midwestern population for help, shows a little leg and lands a ride into Snydersville...a sort of Children of the Corn-style town fraught with gossip, closed mindedness, and repression.

Our satin clad heroines find themselves among people with whom they have nothing in common. Or, in true feel-good-movie-fashion, with whom they think they have nothing in common.* Hiding their true identities, the three queens try to make the best out of their castaway weekend, planning to lay low and keep to themselves as their car gets repaired. Good nature ultimately gets the best of them, however, and the queens start planting some acceptance flavored roots into Snydersville soil. Snydersville can only be described as a parody of middle America: it’s a town used to speaking in hushed tones about its people—who has a drinking problem, who is living in an abusive household, who sleeps with whom in secret. They pick and prod at each other out of boredom, out of insecurity, out of habit, and it isn’t until the drag queens lay their well-manicured hands on them that things begin to loosen up and get better. Through communication, makeovers, and standing up for what’s right, the town changes—perhaps only for the short term—for the better. 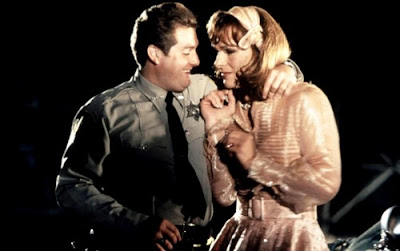 The rest of the movie plays out almost like a montage. While Chichi, Noxeema, and Vida are doing things like fighting rape culture, appealing to an ignored shut in, and defending the inn owner from her abusive husband, Officer Dollard seeks out his revenge. In a 3 AM Twitter Rant Equivalent series of actions, he seeks to disprove that he got “beat up by a bunch of girls,” and becomes obsessed with finding them. I love how in this movie, despite this weak ass witch hunt, the queens really couldn’t be bothered. It’s like the whole movie is full of such good, earnest vibes, an angry cop or any of the movie’s more series moments can’t unravel their journey.

Released after the darker years of HIV/AIDS’ time in the popular eye, what now seems a silly comedy that features actors in dresses is actually a pretty important movie. To see three openly gay, healthy characters living their lives as well as changing those around them for the better...even today is pretty unheard of. Think of most of the movies you’ve seen with queer narratives (there aren’t an incredible amount to choose from), almost all of them feature death and prosecution to a pornographic degree. To Wong Foo doesn’t allow people to gawk; instead, it actively seeks to correct that behavior and create a movie environment where all are included—from country bumpkins to expertly painted drag queens. It’s a feel good movie that manages to stay true to a darker reality and the fears experienced by many queer people. My intention by writing about this movie is not at all to be Pollyanna, nor to forget the very violent reality a lot of marginalized groups are experiencing, instead it’s to celebrate a movie that earnestly goes out of its way to create warmth, love, and acceptance.

I hope you guys are all taking care of yourselves and watching as much comforting media as possible.