Home for the Holidays: The Lion in Winter 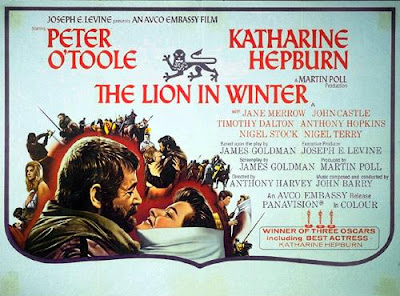 Many families are a complicated Molotov cocktail of egos, resentments, and unresolved complications. You do what you can to get along for most of the year, but holiday gatherings have a tendency to exacerbate things: First there’s your dad, who hates you. Nothing you can do about that. Then there’s your mom and sister, who haven’t spoken in a few weeks but will spend all day pretending like that thing that happened never happened. Your cousin will show up late and take his yearly opportunity to brag about how he went to a better college than you did. Your aunt will get drunk and make you watch funny dogs on YouTube until dinner. And how long has grandpa been so racist? It’s tricky, to say the least. Maybe it’s better to just have it all out. Unload all the dirty laundry, throw some food at each other, and move on with your lives. That’s essentially The Lion in Winter, Anthony Harvey’s 1968 film based on James Goldman’s Broadway play of the same name. It’s the story of a family gathering gone wrong — or, in this case, a royal family gathering gone wrong.

France, 1183 AD: King Henry II of England (Peter O’Toole) holds a Christmas court, hoping to name an heir to his vast empire. He gathers his three surviving sons: the brave Richard (Anthony Hopkins), the conniving Geoffrey (John Castle), and the sniveling John (Nigel Terry), each of whom hopes to be the next king. Overseeing the proceedings are King Phillip II of France (twenty-four-year-old Timothy Dalton, in his first film role) and his sister Alais (Jane Merrow), who, while technically betrothed to Richard, has been Henry’s concubine since she was very young. Gentleman T-Dalts hopes to hold Henry to his promises and ensure that the peace between England and France can con-tinue, while Alais, who loves Henry, hopes not to be sold off to one of his sons. The final piece of the puzzle is Queen Eleanor of Aquitaine (Katharine Hepburn). Though Henry has kept his wife locked in a tower for a decade, he invites Eleanor to join the court and help name his successor. Let the palace intrigue begin.

While there’s plenty of real-life historical context to The Lion in Winter (namely that Eleanor and Richard once led a failed revolt against Henry in response to various treasons, infidelities, and the alleged murder of a Catholic archbishop), the layman only needs to know that some drama has gone down that has the entire family gunning for each other’s throats. Consequently, each of them approaches the Christmas court with their own agenda: Richard, whom Eleanor favors, is prepared to go to war for the crown (a war he’d very likely win). John, whom Henry prefers, is an entitled shitbag who expects his dad to give him what he wants. Geoffery resents his parents for their indifference toward him and sabotages his brothers’ plans from behind the scenes. Phillip, sick of Henry’s condescension and eager to prove his mettle, plots with Geoffrey to provoke an internal war. Then there’s Eleanor, who just wants Henry to suffer for years of mistreatment and doesn’t seem to care who wins as long as he loses. The whole film is essentially a series of dramatic gestures and vindictive arguments — just like your holiday gatherings!

Peter O’Toole and Katharine Hepburn were born to chew scenery, and there’s plenty to go around in The Lion in Winter. James Goldman’s adaptation of his play reads like the wry, ironic lovechild of William Shakespeare and Aaron Sorkin, and the leads deliver it with all the speed and ferocity of two people who are literally trying to kill each other with acting. There’s a quotable line for every occasion (“When I bellow, bellow back!” “I have a confession: I don’t much like our children.” “I could have conquered Europe — all of it — but I had women in my life.”), and it’s impossible not to fall in love with every one of these horrible, horrible people. Another standout is Jane Merrow as Alais, whose inability to get Henry’s attention makes her quiet indignation all the more tragic. The Daltonator shines, as well: he plays King Phillip like a coiled spring, a snake waiting for exactly the right moment to strike. While the production design and music give The Lion in Winter a layer of real authenticity, this is a film that thrives on its truly remarkable lead performances.

That said, it’s easy to get lost in all the backstabbing and character machinations. Alliances crumble minutes after they’re made. Love and devotion are sworn as easily as they’re taken away. It seems that these people will say anything to get what they want, and all they seem to want is for everyone else to be miserable. But that’s the fun. There’s a great late-night scene in Phillip’s bedroom in which prince after prince approaches him with his own secret plan for victory, not knowing that the others are hidden in various parts of the room (Eleanor even lampshades it later: “Don’t you know? There was a scene with beds and tapestries, and many things got said”). It’s such a beautifully absurd scene that we almost lose track of what’s supposed to be at stake. In fact, the real irony is that all this bombast amounts to very little: no one dies, Henry never chooses an heir, and Eleanor is sent back to her prison until Easter. Everyone sits on their pain and anger for another year. Family!

Though The Lion in Winter might not be the most conventional or comforting Christmas movie, it might be the most authentic. It portrays the holiday season as equal parts celebration and commiseration, which it is. We come together with family a few times a year to circle the wagons and figure out where we stand. We talk about our worlds and what’s bothering us about them. We make the occasional confession and start the occasional fight. We might not all try to overthrow our parents’ empire, but sometimes it feels like we should. In the end, though, there’s hope underneath all the scheming and backstabbing: in their last scene together, after they’ve come within inches of executing their sons and narrowly avoided a trip to Rome to have their marriage annulled, Henry and Eleanor share a moment of peace. They’ve done everything they could do destroy each other, and yet here they remain. That’s family, isn’t it? As Henry puts it, “We have each other, and for all I know, that’s what hope is.”