I find this film guilty… of excellence. 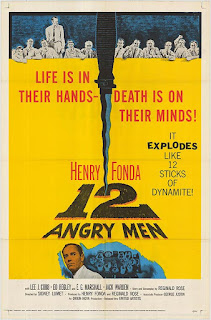 One of only a handful of films that, if it suddenly appears on TCM while I am channel surfing, I feel compelled to drop everything and watch, the 1957 film 12 Angry Men benefits from repeated viewings. The film is outwardly so simple—twelve jurors must reach agreement—but this very simplicity hides layers of meaning and allegory.

12 Angry Men is also a profoundly American film. It suggests that, though the going is often difficult, we can as a nation work through our differences. In this it is democratic to its core; I can think of few other films that speak to the American experience as simply and profoundly. Lately, if I let my sadness and cynicism get the better of me, I can imagine this narrative set in 2016; but in this brave new remake of 12 Angry Men, Juror #10 bellows on and on about some fake news he read on the Facebook, railroads the other jurors, and sends the innocent kid to the electric chair. 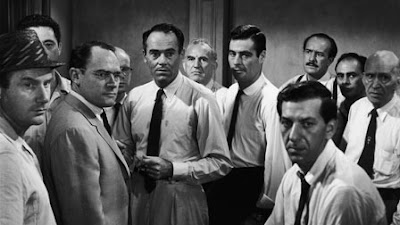 The Plot In Brief: A group of jurors deliberate on a verdict. The case seems open and shut: a young man has stabbed his father to death in a fit of rage. One juror (Henry Fonda) is unsure of the boy’s guilt and tries to convince the other jurors that this defendant may be innocent.

The performances in this film are uniformly outstanding. The characters represent a cross section of white American males in the late 1950s. (When the film was remade for cable network Showtime in the ’90s, an effort was made to somewhat diversify the cast.) Juror #1 (Martin Balsam) is a high-school teacher. Juror #2 (John Fiedler) is a milquetoast and easily swayed. Juror #3 (Lee J. Cobb) is a tough customer and a loudmouth. Juror #4 (E.G. Marshall) is a cool, implacable professional. Juror #5 (Jack Klugman) is a young man from an impoverished background. Juror #6 (Edward Binns) is a no-nonsense working stiff.

Juror #7 (Jack Warden) is a sports fan; he worries that jury duty will keep him from a big ballgame. Juror #8 (Henry Fonda) is the moral center of the film; he questions how easily the other men can condemn the accused. Juror #9 (Joseph Sweeney) is an older man but far from feeble. Juror #10 (Ed Begley) is a crank with a summer cold. Juror #11 (George Voskovec) is a recent immigrant, impeccable in dress and speech. Juror #12 (Robert Webber) is an obnoxious advertising man, supercilious and shallow. 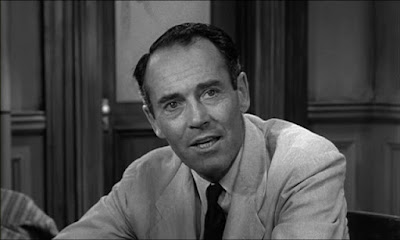 Between his performance here as Juror #8, his performance as Secretary of State nominee Robert Leffingwell in Advise and Consent (1962), and his performance as the President of the United States in Fail-Safe (1964), Henry Fonda represented the country’s moral center around the time I was born. Even in more light-hearted fare like Mister Roberts, Fonda brings a gravitas and integrity that cannot be faked. (I find this interesting because in real life, according to his famous children Jane and Peter, Fonda was something of a disagreeable scold.)

AN ANNOYING AUTOBIOGRAPHICAL PAUSE: I once served on a jury (my Popeish infallibility only extends to film, not to pedestrian injury claims.) The facts of the case to which I was assigned could not have been more different from those of the film, yet I was amazed by the similarity of the experience. Most of us, to a greater or lesser degree, go through our days not noticing that we spend much of our time with people whose lives are not much different than our own. Jury duty is the great melting pot and equalizer. In what other situation do we spend a week or more communicating closely with people of all ages, genders, races, and beliefs? It was broadening and instructional. I marveled at how much of our pained deliberations resembled the film. Also, the lunch they brought in for us every day was exquisite.

12 Angry Men was Sidney Lumet’s first feature film after toiling in live television for years. Lumet’s direction is terrific. With the jurors stuck talking in a cramped room for the duration of the film, Lumet wanted the film to “close in” on the viewer as it progresses. At first, he positions his camera above eye level and uses wide-angle lenses to create a greater sense of distance between the men. As the film marches to its dramatic conclusion, Lumet lowers his camera, transitions to telephoto lenses, and favors tight close-ups of the jurors. Using this simple trick, Lumet succeeds in making the film itself feel claustrophobic. As the juror’s points of view change about the case, Lumet literally changes the audience’s point of view. Brilliant. 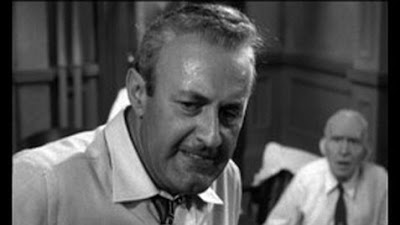 When considering the genre that fits 12 Angry Men best, I immediately choose the Hollywood Social Problem film, but that is only partially correct. It is also a murder mystery and one of the cleverest ever concocted. It takes most of the clichés and conventions of the standard detective story and turns them on their ears. It is the jury here making the brilliant deductions—not the police officer, detective, or prosecuting attorney. Somehow, important and telling details have eluded everyone except these twelve guys. Is this meant to suggest that, when forced to consider diverse perspectives, our own perspective becomes keener?

12 Angry Men was nominated for three Oscars: Best Picture, Best Actor, and Best Adapted Screenplay. It lost all three because Oscar almost always gets it wrong.