I have a theory. SPOILER warning, obviously.

I fully admit that I might be reading into this based on personal experience, but I think the whole fantasy sequence at the end of La La Land is Sebastian (Ryan Gosling) realizing he was chasing the wrong dream. Mia (Emma Stone) was his avenue to life-long happiness and the jazz club he dreamed of opening (and does at the end of La La Land) is no longer his self-actualization. Remember way back when on the Star Wars: The Phantom Menace podcast where Patrick described George Lucas as being trapped in a Star Wars cage? I think Sebastian’s jazz club, affectionately named “Seb’s” for Mia (complete with a music note as the apostrophe), is Sebastian’s Mia cage.

Truth be told, I don’t know if Mia and Sebastian could have ever worked long-term. It’s obvious that they love each other and will think of the other fondly for the rest of their lives. However, using the structure of the four seasons of their romance, a lot happened. It might have been one of those super passionate loves that burns hot and flames out quickly. I think a reason for this is because (at heart) Mia is a revolutionary (e.g. she left Boulder City, she went for a big dream) and Sebastian is a traditionalist (i.e. he refuses to leave L.A., his dream is to revere jazz of the past). Mia is forward-thinking and Sebastian is not and he realizes that he probably should have been even though he’s (most likely) too late. 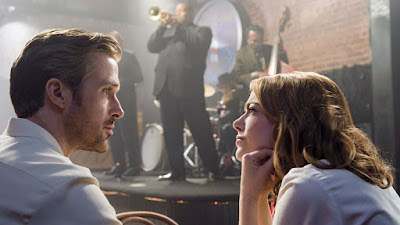 I think it’s telling that Sebastian isn’t seen in a relationship at the end of the movie. There’s ample opportunity to hint that he is, so much so that since they don’t it infers he hasn’t moved on. The giant wall advertisement for Mia’s next movie (or something she’s promoting) being on the side of the Seb’s building is also an interesting visual motif; she’s a cloud hanging over his whole life. He also comments to the other piano player in the “Five Years Later” sequence that “pretty good is great!” when the guy tells Sebastian that the club is doing pretty good. It hints that Sebastian is usually not “pretty good,” otherwise “pretty good” wouldn’t be “great.” Lastly, I don’t think the holiday card with Sebastian’s sister, her husband and his nephew being shown is a mistake. Within the sequence, it establishes quickly what happened to those characters, but they’re so slight in the grand scheme of the story that I think it’s more to give another clue that it’s what Sebastian really wants.

When Sebastian sees Mia as she comes into his club with her husband and plays Sebastian and Mia’s song, that sets off the phenomenal fantasy sequence, which is like Sebastian’s heart bleeding out for Mia to see.

• He grabs her and kisses her instead of brushing her off in the piano bar.

• Sebastian rebuffs Keith (John Legend) and doesn’t join his jazz fusion band, thus eliminating the choice he’ll have to make later of not going to Mia’s play and staying for the band’s photo shoot.

• Sebastian goes with Mia to Paris, plays at a jazz club there while Mia is groomed for stardom. The jazz club is seen as bright and lively as compared to “Seb’s,” which is darker and less vivacious.

• He imagines them married and with a family and super affectionate on a date night at the jazz club - - with someone else playing the piano. He seems happy. The jazz, while important, is not as important to him as Mia is. It still seems like Mia achieved her dream, too. It just goes to show you how delicate our lives can be based on a set of a few choices. 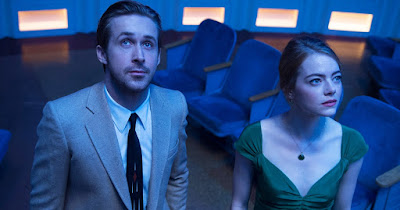 I love how the final shots of the movie recall Casablanca (i.e. “of all the gin joints in all the towns in all the world, she walks into mine.”) and I can easily see Mia and Sebastian getting back together even if it’s much more poetic that they do not. After all, they’re in the same town again, they are still making “do me” eyes at each other and she just has Tom Everett Scott as an obstacle. That’s no knock on Tom Everett Scott’s character. He seems like a decent guy BUT so was her boyfriend that she ran out on to meet up with Gosling for Rebel Without a Cause. Girl’s got heartbreaking in her bones. Gosling put it out there in his piano tribute to Mia and the ball is in her court.

In closing, this is just one theory I had. You could read this movie in a number of different ways (e.g. it’s a more realistic/modern take on the “happily ever after” traditional romantic musical, it’s a statement about sacrifices needing to be made to chase your ultimate dream and how bittersweet that can be, it’s about how timing is just as important as anything in a relationship etc.) which is one of many, many reasons it’s an incredible movie.
Posted by Patrick Bromley at 12:00 PM