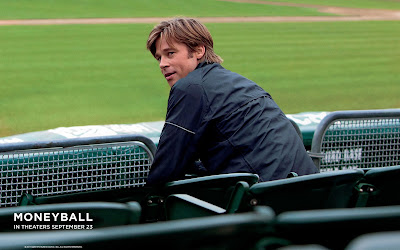 My dad (lovingly plagiarizing other notable scholars) always taught me that baseball is a slow game of failure. A war of attrition. It’s not about hero warship or team allegiance; it’s about the day-in day-out grind of the game. Going 3-for-5. Winning two out of three. Not exactly high-minded idealism, I suppose. But despite the grim and dour reality of a 162-game season, movies about baseball are some of our best romances. They’re stories about heart and hustle, about faith and love. Some – like The Natural or A League of Their Own – focus on the way a player’s on-field life parallels their personal successes and existential failures. They end with the big hit in the big game and the big moment where all the big stuff happens very bigly. Others – like Field of Dreams or even The Sandlot – are more about the emotional impact that the game has on the rest of us, how our love of baseball colors our worldview and creates a foundation from which we build our spiritual lives. But there are a few, like 2011’s Moneyball, that do both. Bennett Miller’s film presents a character whose shortcomings as a player and frustrations as a manager fundamentally reshaped the way he saw the game and drove him to share that vision with the rest of the world. 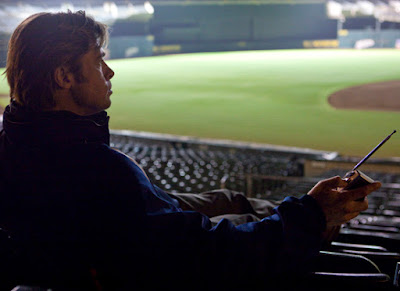 October, 2001: The Oakland Athletics have just lost the American League Division Series for the second year in a row. General manager Billy Beane (Brad Pitt), frustrated with a system that allows large-market teams like the New York Yankees to lure talented players away with big contracts while his A’s flounder in lower tax brackets, decides to abandon baseball’s time-honored approach to drafting (look for Good Bodied, Strong Faced young studs and hope they develop into decent players), and embrace a new approach. Billy – himself a former first-round pick who went nowhere — recruits statistician Peter Brand (Jonah Hill) to help him build a team of discarded and underestimated players, those whose considerable talents have been overlooked by scouts in search of the sexiest new star. Baseball is proud, though, steeped in tradition and set in its ways. Billy’s new system makes him the enemy of players, owners, the media, the fans, and really anyone who thinks they know a thing or two about the game. Worse yet, it doesn’t seem to be working. Now in charge of a misfit clubhouse full of has-beens and never-will-bes, Billy must strike a balance between the probable and the impossible on his way to a record-setting pennant run.

Adam Riske would want me to tell you that much of Moneyball deviates from the reality of the 2002 Athletics’ season. For one, it completely ignores the A’s monster pitching staff (which included Tim Hudson, Mark Mulder, and AL Cy Young winner Barry Zito) and the offensive contributions of shortstop (and AL MVP) Miguel Tejada. Also, the real Billy Beane — while undeniably an innovator — actually learned the value of sabermetrics from his predecessor, Sandy Alderson. Hell, Peter Brand isn’t even a real person; he’s a composite character based mostly on Assistant GM Paul DePodesta, who asked not to be included in the film. All this is to say that sometimes movies deviate from reality, as they should. Real life is not as dramatic -- not as driven by the machinations of villains or the one-against-the-world courage of the plucky hero -- as movies are. Movies need skeptical authority figures like A’s owner Stephen Schott (Bobby Kotick) and mustache-twirling villains like team manager Art Howe (Phillip Seymour Hoffman). Movies needs scrappy underdogs like Scott Hatteberg (Chris Pratt) and wizened mentors like David Justice (Stephen Bishop) and Ron Washington (Brent Jennings). That Moneyball shapes these real people into archetypes is not a strike against it, but rather a testament to its devotion to the myth of baseball and the myth of movies. 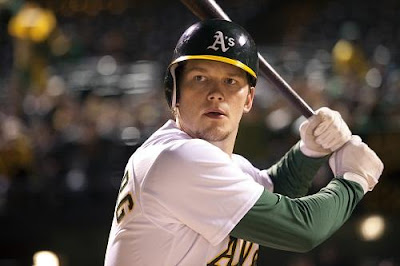 Then again, Moneyball shakes off traditional melodrama at nearly every opportunity. These aren’t the gung-ho teammates we’re used to seeing in sports movies, athletes in their prime working through their differences so they can Help the Team. These players are commodities to be bought, sold, and traded away at a moment’s notice. Their isolation is an essential part of their reality, and some of the film’s most dramatic scenes are the ones in which they’re told that their time with the team is up. There’s a bit in which Scott Hatteberg — a free-agent catcher with crippling nerve damage — stares at his TV, waiting for a phone call he’s afraid will never come. His trophies and jerseys line the walls, but his wife’s look of quiet concern tells us all we need to know. Another scene finds veteran David Justice batting balls alone; he thinks he’s too good for the A’s and doesn’t understand what he’s doing there. A mid-series trade sends reliever Ricardo Rincon to the team he was pitching against only hours earlier. While Moneyball does eventually pivot toward team communication and unity (once Billy learns why it’s so important), it’s so much more interested in the characters’ complicated relationship with baseball than it is with the on-field stuff (which is why Hatteberg’s walk-off homer for the twentieth win carries such little dramatic weight). This isn’t about big moments or easy resolutions; it’s about forcing a permanent paradigm shift.

The core of that deconstructionism really lives with Billy Beane, who personified star power over durability, baseball’s singular, most cynical failure: its tendency to build celebrities instead of players. The film is laced with flashbacks to a young Beane as he’s scouted, signed, and subjected to one embarrassing plate appearance after another. He spirals downward from team to team before shuffling quietly into the minor leagues, never to return. While he’d eventually make a career as a scout and then as a GM, there is pain in Billy Beane, a sense of personal responsibility that we rarely see from those who benefit from corrupt or imperfect systems. His restless ambition comes not from a desire to return to his former glory (because it doesn’t exist), but to improve a system that misjudged him so spectacularly in the first place. There’s a responsibility to his team and to his fans, to his daughter (Kerris Dorsey, playing a precocious child straight out of a Shane Black film) and to himself. Many — including ousted head scout Grady Fuson (Ken Medlock) — see Billy’s crusade as a path to revenge against baseball: “This is about you and your shit,” Fuson says. “Some scout got it wrong, and now you declare war on the system.” In reality, it’s about holding that system accountable for tendencies that serve only to perpetuate itself at the cost of meaningful progress. 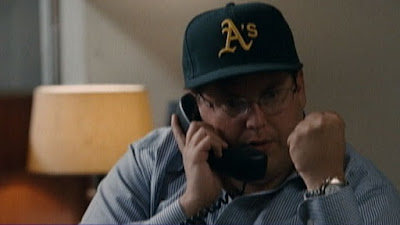 There’s a version of Moneyball we’ll never see, a documentary/narrative hybrid directed by Steven Soderbergh and featuring interviews with Beane, former Athletics teammates, and sabermetrics godfather Bill James. As much as we’d all prefer a movie with Soderbergh’s name on it to one without, those interested in the nitty-gritty of WAR and OPS can read Michael Lewis’ excellent source book. The human story behind Moneyball is well worth the narrative treatment.* Bennett Miller’s intimate style romanticizes the material without selling it short, lending a nice weight to each moment that another director may not have taken the time to give us. Those with an Aaron Sorkin allergy will be happy to learn that his Moneyball screenplay (rewritten from Steve Zaillian, who rewrote Stan Chervin) mostly ditches the stylized dialogue and elaborate walks-and-talks while keeping the musical pace and rhythm for which he’s become so famous. Consider the brilliant bit in which Beane negotiates an elaborate series of trades over the phone. That scene literally breathes in and out, expanding and contracting as it builds to a peak. It’s one of many in Moneyball that make it such an unconventional sports drama, one that challenges the mechanics of the game itself and the ways in which we play it.**

*It’s worth noting, however, that the film completely wastes Phillip Seymour Hoffman, one our most human and vulnerable actors. It’s clear that Moneyball’s long development and rewriting process had some casualties.

**I also want baseball nerds to know that I’m not endorsing Moneyball tactics over traditional scouting. I know there are different schools of thought on it, but I just didn’t see any reason to have that particular argument in this essay.