We Need to Talk About Morgan 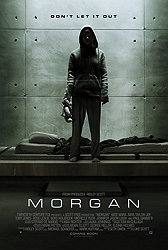 On empathy, character, and “calling the ending.”

Spoilers ahead for Morgan:

You probably missed Luke Scott’s Morgan last year. If that’s the case, you’re Fine. You get most of what you need from the trailer: Ex Machina meets Splice meets a thousand other “creepy person in a mystery box” science fiction premises. Is she human? Is she machine? Where does she poop in that glass room? You get the idea. Luke (son of Ridley) Scott’s debut feature is a strong technical exercise from a filmmaker with a lot of potential. Movies are very hard to make, and Luke Scott is probably going to be very good at making them if he continues to do so. But Morgan lacks soul. It lacks purpose. It lacks that often-intangible quality that transforms a film from a mess of bits and pieces into one of Roger Ebert’s empathy machines. Now, this isn’t to suggest that every movie needs a romance or a hero’s journey or a Jar Jar fucking Binks to make the kids laugh. That’s not what this is about. Plenty of great films challenge traditional structure and revel in their weirdness. This is about building a narrative in which we understand who characters are to each other, themselves, and what pushes them to action. This is doubly important in a film like Morgan, one so interested in the little nuances that separate human beings from everything else. 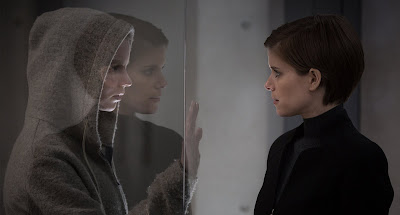 So, Morgan: At a secluded institution in East Jesus Nowhere, Drs. Simon Ziegler (Toby Jones) and Lui Cheng (Michelle Yeoh) lead a group of scientists to a major breakthrough in the development of artificial DNA. Their prize achievement is Morgan (Anya Taylor-Joy), a five-year-old girl with synthetic parts and crazy growth hormones. She appears much older than her physical age and displays remarkable intellect and intuition. Trouble is, she also displays remarkable strength and emotional instability. After attacking Dr. Kathy (Jennifer Jason Leigh — blink and you’ll miss her), Morgan is confined to her habitrail pending an evaluation by The Corporation’s risk-management agent, Lee Weathers (Kate Mara). At first, Morgan tests well: she shows empathy for those she hurt and seems to feel real remorse for her actions. Even her handlers, weary of Lee’s cold professionalism, are defensive and territorial. They insist that Morgan is a person who deserves the right to make mistakes and learn from them. Lee disagrees, and after Morgan takes a bite out of the new psychologist (Paul Giamatti — this cast is ridiculous), she insists that the project be terminated. Morgan has other plans.

Morgan should work because it’s got a decent premise and a tremendous cast (further including Brian Cox, Rose Leslie from Game of Thrones, and Vinette Robinson and Jonathan Aris from Sherlock), but it’s dragged down by bland execution and underdeveloped characters. It’s not the only film guilty of that sin, of course, but it’s so much worse when digging into what makes those characters tick is supposed to be the whole damn point. If we’re supposed to be debating Morgan’s humanity and her influence on the larger family dynamic between all the scientists, then shouldn’t we have some understanding of who those scientists are and what shapes their behavior? Take Rose Leslie’s character, Dr. Amy. She’s Morgan’s favorite handler and the lynchpin to this whole escape scheme. She promises to take Morgan somewhere peaceful, somewhere she can soak in the true beauty of the universe and all that jazz. Aside from that, we basically know two things about her: she doesn’t like Lee, and she’s got the hots for hunky kitchen monkey Skip (Boyd Holbrook). There’s a bit early on to suggest that she has “boundary issues,” which sets up her devotion to Morgan, but there’s not much else to go on. Their connection is emphasized in dialogue, but only briefly shown. 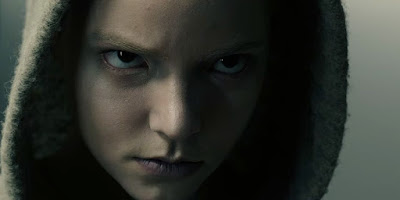 A more infuriating example might be the red-hot romance between Dr. Brenda (Robinson) and Dr. Darren (Chris Sullivan), which consists of one conversation at dinner and one scene that implies they’re off-screen banging each other. Again, a better-developed dynamic might add weight to their insistence that Morgan was the “child” that helped build their relationship. Instead, we’re told they share a deep connection. We never see it, and they never spend significant time with Morgan (sorry, wait. Darren calls her “buddy,” so that’s a thing). Dr. Simon seems protective enough of Morgan, but we get the sense that what he’s really protecting is the blood and sweat he put into researching the project that developed her. Dr. Lui reads more as the enigmatic head honcho lady who supervises a number of projects, so no real personal connection there. The point here is that Morgan’s third act shift is meant to be motivated by contrasting Lee’s cold, calculated precision with the deep-seeded emotional bonds that this crew shares with their child. We’re supposed to be questioning what makes a person a person, what right a synthetic creature has to determine its own destiny, and how ethical standards can get wonky when affection becomes a factor. We can’t do that with the pieces Morgan gives us.

Put it this way: it’s never fair to compare movies, but Ex Machina works because Ava manipulates Caleb’s human need for connectivity and, in doing so, displays a weakness and authenticity that Nathan (an actual human being) seems to lack. Caleb is then forced to examine his own humanity (the arm scene!) and, as a result of some soul searching, moves to free Ava from her prison. What happens next perfectly illustrates the way Caleb’s humanity allowed him to be put in that position and the way Ava’s adaptation to humanity allowed her to take the actions she does. Again, it may seem inappropriate to compare one film with another, but Morgan and Ex Machina share so many themes (and the latter film develops those themes in such a superior way) that it’s hard not to see the similarities. None of this is meant to disparage Anya Taylor-Joy, who does what she can with very limited material. Morgan’s character arc is built around her ability (and right) to learn from the mistakes she’s made as a result of her model’s increased capacity for emotion. It’s a great hook on which to hang the film, really, because we often struggle with those same questions ourselves. What right does a person have to make a mistake, learn from it, and progress? Taylor-Joy plays that angle with all the latitude she can, but she’s never given the opportunity to develop it. 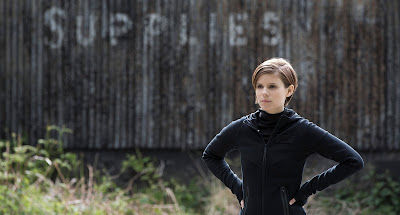 Lastly, the ending: I often joke that “if your friend says they saw the twist ending to ______ coming, they’re lying.” I get a lot of flack for that. People say I’m not looking hard enough, or that they just have more experience watching movies than I do.

The reality is that guessing a bad twist ending often has less to do with actual signifiers in the film than it does with viewing habits. It’s natural to speculate, but movies are not supposed to be our enemies; we shouldn’t spend their running time trying to outsmart them. We should allow a film to take us where it wants us to go, and we should judge it as a cohesive whole when it’s over. Case in point: Morgan’s twist ending is total bullshit. Yes, it explains how Lee was able to survive her injuries and why she was so weird around everyone. Yes, it pays off Jennifer Jason Leigh’s “assassin” line and Lee’s sterile, androgynous vibe. But the revelation that she’s also a synthetic person (an older model, free of the tendency toward emotion) rings like a cop out. That’s what my “lying” line is about: the film didn’t earn the twist, so there’s no way it’s going to feel right. It’s not in service of anything. It’s lazy dressed up as profound, answering a question the film never really asked. Morgan ends up arguing that emotional entanglements create complications. That’s fair, but we’re never emotionally involved enough in the film to care.