In this week’s “Back to 1955,” we’re taking a look at the ground-breaking sex comedy that launched Marilyn Monroe’s star power into the stratosphere.

In 1955, Marilyn Monroe was already a star, having appeared in a handful of movies over the past few years and rising through the ranks of leading women in Hollywood, but her turn in Billy Wilder’s The Seven Year Itch made her an icon. The great Billy Wilder (when someone makes as many outstanding classics as Wilder did, we are legally and morally obligated to refer to him as “The Great”) had a knack for casting the right people for the right parts, which is one of the things that make a lot of his movies--I’m thinking particularly of Sunset Boulevard--so awe-inspiring. Wilder’s decision to cast Monroe, who had just posed for Playboy and was rapidly achieving the reputation as America’s sexiest celebrity, in his film about a married man feeling the temptation to cheat on his wife is now perhaps one of cinema’s most defining moments.

The Seven Year Itch follows Tom Ewell as Richard Sherman, a man approaching middle age in Manhattan who finds himself alone for the summer after his wife and child head north to escape the brutal New York heat. Sherman has been married for seven years, and is starting to feel the calling of something akin to a midlife crisis. He wants to view himself as full of passion and danger, and misses the smoking, drinking, womanizing lifestyle that he gave up when he got married. Enter Marilyn Monroe in what has to be her most self-aware, exaggerated sexpot performance as a tenant in the apartment above Sherman. He’s feeling the seven year itch, and the best way to satisfy an itch is to scratch it. 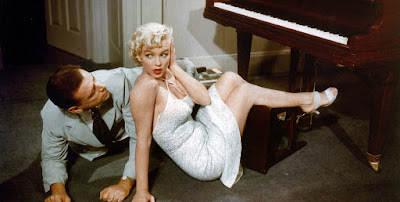 The film is based on a play of the same name by George Axelrod (who also co-wrote the screenplay with Wilder). The play was a very different beast compared to Wilder’s big Hollywood version: instead of clever sexual innuendo and temptation, there was very frank sexual dialogue and actual sex being had between the characters. Wilder was in a very different boat with his film than Axelrod was with the play because of the Hays Code, also known as the Motion Picture Production Code; The Hays Code was enforced by a watchdog group who oversaw the production of films and made sure that they didn’t contain any content that might cause the audience to be drawn toward what they deemed to be lewd or inappropriate thoughts. I like to refer to them as the decency police, and they’d been on the scene in a major way since around 1934, when they really started to crack down on the content of movies, whitewashing away all the stuff that we would now consider interesting. The Hays Code was everywhere during this era of filmmaking, and their control and influence touched everything. But by 1955, cracks had begun to form, and its reign was almost at an end.

Along comes The Great Billy Wilder, who cleverly found ways to subvert the whole system. The Seven Year Itch is a comedy about sex and adultery that contains no sex or adultery. For all Monroe’s sultry behavior, she does nothing at all inappropriate. By staging elaborate fantasies for his middle-aged leading man, Wilder is able to place most of the naughty behavior in the realm of the imagination, allowing himself the freedom to say and do things that he otherwise would never have been able to get on screen. What’s more, The Seven Year Itch is a charming, hilarious movie. It’s frequently laugh-out loud funny, such as when Sherman decides to eat at a vegetarian café for lunch and must listen to his graying waitress espouse the merits of nudism, or when Sherman fantasizes about having a woman passionately make love to him on the beach in a direct parody of From Here to Eternity. Wilder’s comedic timing and absurd wit go a long way toward disarming audiences watching this movie with a red pen at the ready. It’s this sense of ridiculous comedy that makes some of Wilder’s more outrageous concepts, like two guys in drag in Some Like it Hot, so accessible and fun. He took this movie and its messages very seriously, but it seems like he’s having a great time.

Marilyn Monroe is wonderful in a role that is so exaggerated that it ALMOST falls into the category of camp, but not quite. She’s not playing much of a character in this movie; she’s playing a bigger version of Marilyn Monroe. Her character doesn’t even have a name in this movie, and she’s credited simply as “The Girl.” There’s even a meta scene where Richard Sherman, hiding “The Girl” in the kitchen when the doorbell rings, says “I’ve got Marilyn Monroe in the kitchen!” They might as well look directly into the camera. It’s zany, but it’s a ton of fun at the same time. At this point in her career, Monroe knew exactly who she was and where her star power came from, and she does everything she can to live up to it while still parodying the ridiculousness of it all. Witness a scene in which she recites a toothpaste commercial in the sexiest, breathiest, most ridiculous way possible; this is an actress who has arrived and is in full control, even in the most artificial of performances.

This is also the movie that gave us THAT scene, the most iconic scene in all of Marilyn Monroe’s career. I’m talking about the subway scene in which she stands above a subway grate in a white dress that blows up when the train passes beneath her. It’s easy to take that scene for granted now, especially since it’s so engrained in our culture that it was in a Snickers commercial with Willem Defoe recently. It’s interesting to learn (and see for yourself when you watch the movie) that the sequence as we remember it isn’t actually in the film. What we see in the film itself is a cutaway to just her knees down. There is no full-body shot of Monroe standing there with her skirt up, showing her underwear in this movie. That scene was deemed to sexual and naughty by the Hays Code to be allowed into the movie, so Wilder—I’m sorry, THE GREAT Wilder put in as much as he could, though he was forced to make several cuts. He got his revenge, though, when it came time to market the film, and he used the full-body image of Monroe in posters, billboards, and even a massive blow-up that hung on the side of a building. This is how the world would remember Monroe, and it has continued to be the most defining, iconic image of the star, even over sixty years after the fact. 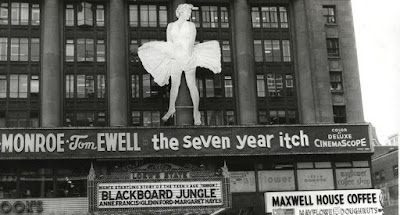 The Seven Year Itch is a classic movie that holds up remarkably well. It manages to tackle issues that still pervade our society and deconstruct the fragile male ego and brain-clouding horniness of men everywhere, but it does it in an honest way that was extremely progressive in 1955, blasting down barriers and playing a part in the Cultural Revolution that was soon to follow. By 1968 the Hays Code would be replaced with something more effective, the film ratings system, and censorship would give way to freedom of expression. Maybe more important than its influence is the fact that it’s still a great movie, filled with hilarious jokes and sharp performances, and it manages to entertain as easily now as it did in 1955.