Be Sure to Never Ever Scream: A Look Back at Dead Silence 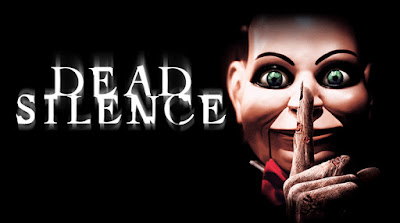 “Beware the stare of Mary Shaw
She had no children, only dolls
And if you see her in your dreams
Be sure to never ever scream.”

Hot on the heels of Saw, creators James Wan and Leigh Whannell served up a second entry predicated on a single idea: ventriloquist dummy horror. Dead Silence premiered on March 16th, 2007, and follows the story of Jamie Ashen (Ryan Kwanten) as he investigates the mysterious death of his wife Lisa (Laura Regan), a death for which he has drawn the suspicion of a detective (Donnie Wahlberg). Lisa’s death was violent; her tongue was removed after she encountered a shadowy figure and screamed in fright. Just before her death, Lisa received a gift in the mail: a creepy-looking ventriloquist dummy named “Billy.” As Jamie returns to his old hometown and digs deeper into the doll’s connection to his late wife, he uncovers a horrible history.

Dead Silence took a conventional bit of lore and expanded it into a full 89-minute film. Like Candyman, Dead Silence allows the legend to grow its own legs through eerie character testimony and vivid revelation. Mary Shaw is the sort of villain that children would dare each other to conjure late at night, and she is no less legendary in her own tale. To gaze upon her is to dance with death, as the locals of Raven’s Fair warn. The eye is a common motif in the film, used in many transition shots and close-ups. Once you see Mary Shaw, you’re in mortal danger, but seeing itself isn’t the crime, it’s screaming. If you scream upon seeing her face, that’s when you’re a dead man (or woman). Her victims don’t just drop dead of fright, their tongues are ripped from their bodies, so that they may never speak ill of Mary Shaw again. When townspeople do speak of her, it’s in the lowest of tones, with constant glances over their shoulders as they tell their tale. The fear seeps from every character in every scene like fog over the moors in an old Barbara Steele flick. It’s flourishes like this that make Dead Silence a simple but memorable ghost story. 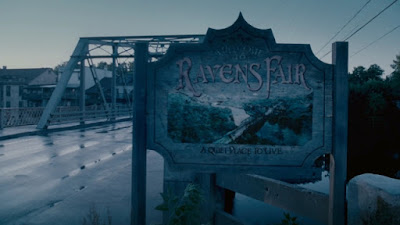 Creative duo Wan and Whannell have proven themselves to be legit horror fans, and their work shows it. Dead Silence crafts an atmosphere reminiscent of old-school Hammer horror films, creating genuine scares in the most common horror settings. The main setting for the film is a town called Raven’s Fair, and if that doesn’t scream Edgar Allan Poe, I don’t know what else to tell you. There are scenes in an old mansion, a foggy graveyard that looks like it came straight out of Black Sunday, a theater, and a Lovecraftian funeral home, and yet none of it feels tired. All that’s missing is a shadowy seaside castle and a brooding Christopher Lee-type wearing a cape. This isn’t aping, this is love for the genre in every frame.

The Bava influences are so heavy that the film could have just as easily been processed in Technicolor. Vibrant, saturated colors give off a near-hallucinatory beauty. Measured use of red, and then only in its deepest scarlet shade, echo Mario Bava’s ethos exploring the potential to generate a flurry of subconscious reactions from a single image. Even when entire scenes are comprised of muted palettes, the imagery is memorable. Color and movement blend with chiaroscuro to create a spectrum of emotion ranging from abject fear to childlike awe. 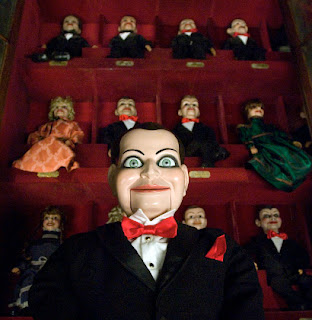 For all of its gorgeous locations and meticulous set-pieces, Dead Silence continues to divide horror fans in its third act. While some fans enjoyed the ingenuity of the film’s big twist, others pointed to it as another example of a horror movie being ruined by explaining the evil. To be fair, Whannell shared the sentiments of the latter; he and the studio didn’t see eye-to-eye on the story, and eventually their professional relationship broke down and Universal brought in a script doctor to make heavy changes (he doesn’t explicitly say what those changes are). In his official blog, Whannell details his harrowing experience with Universal Studios after a successful initial pitch:

“…Over the next year, as I slaved to produce something people actually liked, there are certain terms the execs would use that I came to despise, and that only made things worse. The biggest one was ‘the rules.’ What are the rules?, they would want to know. The rules, the rules, always the rules. Allow me to explain. In Japan, if a horror film was made that featured a demonic cat that took its head off and started vomiting acid rain through the hole in its neck, all the while tap-dancing to the tune of ‘Never Gonna Give You Up’ by Rick Astley, no one would question it. ‘How creepy is that fucking cat?’, they might ask -- but nobody would ever dream of asking WHY the cat does this, and if they did, the answer would be pretty simple: because it’s a demonic cat you fucking moron, and demonic cats do weird shit.

Now, if that same Japanese demonic cat movie made a few dollars and was then remade in Hollywood because they had no fucking ideas of their own, the first thing Chad and Debbie would ask is ‘Why does the cat take it’s head off and tap-dance to Rick Astley? What’s the mythology behind it? What are the rules?’ Only in a place as fucking stupid as Hollywood would someone use the word ‘rules’ when talking about shape-shifting cat demons. The only logical response to Chad and Debbie’s question is ‘THERE ARE NO RULES, IT’S A SUPERNATURAL CAT YOU DICKHEAD.’

Unfortunately, no one ever says this to Chad and Debbie (the studio execs), because they are the gatekeepers of the mystical kingdom of Hollywood and you are a lowly writer who should be thankful to be breathing the same oxygen as them. I was no different. For months upon months, per Chad and Debbie’s request, I struggled to work out what the ‘rules’ of Mary Shaw were (she was the villain of the piece, for those who haven’t seen Dead Silence). This, to me, is the reason why the best horror films are ALWAYS independently made. Studios just don’t realize that when it comes to horror, nobody - not one person in the theater - gives a shit about the rules. All they care about is seeing something disturbing and pants-wettingly frightening. Audiences know that the less explained something is, the creepier it is. Years were shaved off my life during this process of working out the rules for Mary Shaw (a ghost who uses her ventriloquist dummies to travel through... that’s what we’re talking about here, for Christ’s sake). I’m convinced that the ball of stress created by Dead Silence will eventually be what kills me...like asbestos fumes from an old factory job. One of the things that used to upset and confuse me the most during that time was that I had everything I had ever wanted -- namely, a filmmaking career -- and yet I wasn't happy.” 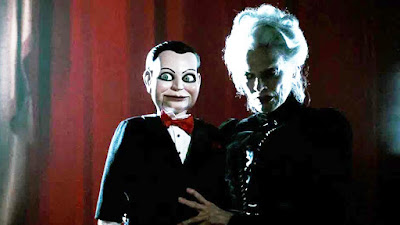 It may have been better to see the full story as Whannell and Wan had intended to tell it, without the influence from corporate horror. It may have been best to just leave Mary Shaw alone and let the monster stay in the shadows. While I personally enjoyed the ending, the fact remains that up until that final 10 minutes, the story and visuals still stand together consistently in chilling atmosphere, tone, and narrative. In any case, Dead Silence is a solid horror film, one that showcases both the Wonder Twin powers of Wan and Whannell, and their love of the films and filmmakers that influenced their work. They wanted to make a cool ventriloquist dummy horror movie, and in that regard, they succeeded.