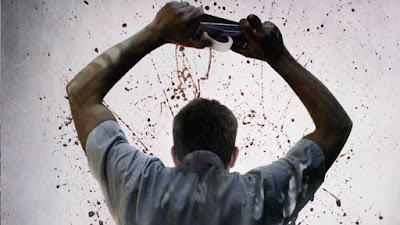 The poster for the new James Gunn-scripted horror movie The Belko Experiment sells it as "Office Space meets Battle Royale." Yes, it's can be very reductive to describe a movie by just comparing it to other stuff (it's also how every would-be screenwriter sells their would-be screenplay), but in this case the logline is incredibly apt. This is a movie that combines the metaphorical deadening of humanity caused by being a corporate drone with the literal deadening of humanity caused by an explosive going off in the back of your skull or a fire axe to the face. It's one of the bloodiest, most savage wide releases I've seen in a long, long time. We should expect nothing less from the director of Wolf Creek. 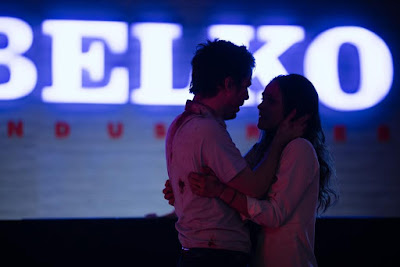 Belko Industries, a staffing company with an office in Bogotá, Columbia, is having an unusual day. The locals are sent home in the morning by armed guards, leaving only about 85 employees in the building -- all relocated from around the world and implanted with tracking chips for insurance purposes in case of kidnapping. A few hours into the workday, a voice comes over the building's speakers and announces that two employees must be killed in the next 30 minutes. Steel gates close around the windows and doors. Cell phone reception is blocked. The next direction demands that 30 employees are killed or else 60 will die via the tracking device -- actually an explosive -- detonating in the workers' heads. Fear and panic set in, but not much before the desire for self-preservation, and, as a result, a whole lot of violence, blood and murder.

The Belko Experiment is good. Really good. The horror genre has a history of using external threats to explore mankind's willingness to turn on one another and be truly awful when the shit hits the fan. George Romero's entire zombie cycle is entirely about this idea. So is The Mist and The Descent and The Divide and much of the Saw franchise; the list goes on and on. The Belko Experiment basically just eliminates that external middleman and asks people to be horrible to one another from the outset. One of the things that's smart about Gunn's screenplay is that it's not always obvious which way the characters will go -- not just who lives and who dies, but who will be complicit in murdering for survival and who attempts to find a more moral way out of the predicament. The cast that director Greg McLean has chosen allows for surprises, too; sure, we may suspect that John Gallagher Jr. (Hush) is going to be the voice of reason and that John C. McGinley is going to be a psychopath (because John C. McGinley), but some of the other choices aren't so easy to pigeonhole. Don't assume you know how the story arcs of actors like Michael Rooker, Adria Arjona, Tony Goldwyn, Melonie Diaz or Brent Sexton will exactly play out because The Belko Experiment doesn't make it that easy. Also, how cool is that cast? And I didn't even mention Gregg Henry and Sean Gunn, more members of James Gunn's stock company, or Rusty Schwimmer, David Dastmalchian, Josh Brener and Abraham Benrubi. This is a movie filled with character actors we're happy to see show up. 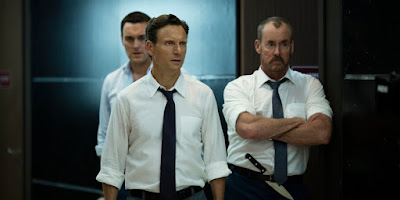 McLean's direction is sleek and confident, missing some of the ragged rawness he brought to Wolf Creek because a cleaner approach is what's right for this material. On occasion he indulges in some black comedy -- you almost have to when the material gets this grim and absurd -- but it doesn't always work (the scenes that fell flat for me most often involve music being used in counterbalance to what's on screen). On the whole, however, he's got a great control of the movie's difficult tone: incredibly bleak but still humanistic with just enough corporate satire to give the film teeth beyond its shocking violence, much of which is handled practically. I love the detail Gunn's script includes about the circle-jerk nature of Belko's mission statement: they are a company that produces nothing, provides nothing. They exist to be a corporation and nothing more, which obviously has reasons explained later in the movie.

I don't want to play the old "third act problems" card, but I'd be lying if I said the way The Belko Experiment resolves is totally satisfying. It's missing something at the end -- not a twist, necessarily, but something that would put everything into a new perspective or open up the thematic concerns to a larger degree. The movie sees its premise through but lacks the inspiration that precedes it. That's the kind of nitpicking luxury one has only when the rest of a film is as good as this one is, so I can't really complain. The Belko Experiment wants to put us through the ringer, and put us through the ringer it does. This is carnage on a massive level, and both McLean and Gunn must be applauded for their commitment to the bit. 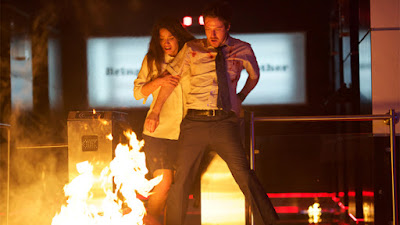 Goddammit is 2017 a good year for genre movies so far, and The Belko Experiment is yet another movie to add to that growing list (which also includes Get Out, The Devil's Candy, Don't Kill It, Get the Girl and Split for a lot of people, though not really me). It has a singular vision that it executes singularly, making good on the idea of Office Space by way of Battle Royale and offering one of the highest body counts for a horror movie ever released in multiplexes across America. With less than $5M in box office in its opening weekend, it's the type of movie that's going to be discovered months and years from now as it shows up on Blu-ray, Netflix and cable. I suspect it's going to age well -- a document of a period in which we are increasingly frustrated with our powerlessness in corporate America and ready to turn on one another at a moment's notice. As tensions boil to a head across any number of lines -- political, racial, economic, even which fucking comic book company's movies you prefer -- The Belko Experiment is going to seem more and more prescient. Better stock up on fire axes now.
Posted by Patrick Bromley at 5:00 AM