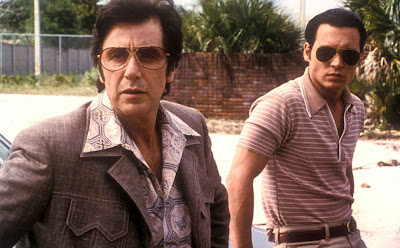 One movie’s fuhgeddaboudit. The other one’s “forget about it.”

One of my favorite movie-watching rituals is going through my compilation DVDs and picking out movies to revisit that I haven’t seen for a very long time. On the heels of its 20th anniversary this week, I got the impulse to re-watch Mike Newell’s underdiscussed mob gem Donnie Brasco. I say underdiscussed rather than underrated because I don’t know anyone who has seen this movie and not walked away impressed by it. It just doesn’t get talked about very much because it belongs in a subgenre with arguably bigger home runs than any other. When you have all-time classics like The Godfather, The Godfather Part II and Goodfellas standing above all others, the rest sometimes have to fight for scraps. Donnie Brasco is an entirely different animal though and that’s one of the many reasons I love it. 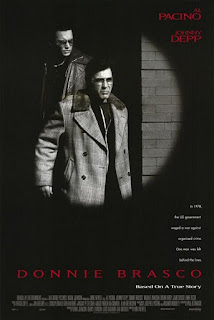 When I say a different animal, I mean it’s a movie that (before The Sopranos) stripped away a lot of the romanticism and operatic nature of organized crime and examined it through the eyes of working-class gangsters. Al Pacino’s character, “Lefty” Ruggiero, is an asset but not a strategist. He’s a pitiable figure even within his own crew but he’s kept around because he’s loyal and an effective killer. The fact that Pacino elicits so much sympathy for a murderer is a testament to how great the legendary actor truly is. No one plays sad like Pacino can (similar to how Robert De Niro is an excellent and fearless actor playing ugly, bitter men) and “Lefty” is one of his best characters. His final scene in Donnie Brasco is one of unbelievable, unspoken gestures as he leaves his effects to his girlfriend before he heads out of his apartment one last time. Johnny Depp is equally great as the title character (an undercover FBI agent), showing what a versatile performer he would become known to be before his ascent to superstardom in the Pirates of the Caribbean franchise. The two have tremendous chemistry and their interplay is key to the movie’s success, as it bookends the rise of a mob sect (led by Michael Madsen in maybe his best performance) with a real human drama of a mentor/protégé relationship where the pupil earns the respect his teacher never received. Paul Attanasio’s Oscar-nominated script is a gem, juggling so many elements at once and at the same time being a thrilling story and deep character study. Also worth commending is the beautifully sad score by composer Patrick Doyle. 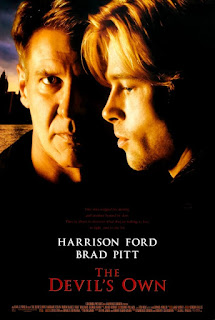 Donnie Brasco is a movie I’ve stopped and watched on cable and home video a handful of times over the years and is consistently great with every viewing. I own it on a double feature DVD with Alan J. Pakula’s drama-thriller The Devil’s Own, also from 1997, starring Harrison Ford and Brad Pitt. So I figured, what the hell, why not also give it the “20 Years Later” treatment with a revisit? I haven’t watched The Devil’s Own since its opening night in March 1997. I saw it on the heels of a huge Harrison Ford run in theaters. In January, February and March of 1997, Ford was on-screen in the re-releases of the original Star Wars trilogy, which I saw a combined five times in theaters in those months. It got to the point where virtually every time I would go to the movies it would be to see something with Harrison Ford. I think I hoped by osmosis or something The Devil’s Own would get some of the magic of the Star Wars trilogy and be awesome, too. This was an insane thing to think, but I was fourteen so what did I know?

Needless to say, I watched The Devil’s Own (which was a very troubled production, chock with script changes and a star, Pitt, who threatened to walk off the movie) and was underwhelmed. I never have thought it was a bad movie. It’s ok. It just doesn’t work for a number of reasons. First, the story of a boy-scout honorable cop (Harrison Ford) unwittingly putting up an IRA terrorist (Brad Pitt) as a houseguest is a case of a film where two pretty much unrelated stories are jammed together in a way that is not believable. Second, while Ford is good at playing a variation of a role he played multiple times in the ‘90s (i.e. the cop/government worker etc., bound by duty and moral code), Pitt doesn’t quite sell his role. He goes full-on Irish accent and it gets derisive laughs sometimes at the expense of the story. James Horner’s Irish Spring commercial score doesn’t help matters. Anytime Pitt is on-screen -- hanging out with a friend, fixing up an old boat, shooting pool, etc. --it goes into full Irish overdrive. It feels almost like the late composer wrote too much music for Titanic and gave the scraps to Pakula. Sadly, The Devil’s Own would mark the final directorial effort for both Alan J. Pakula and cinematographer Gordon Willis before their respective passings. 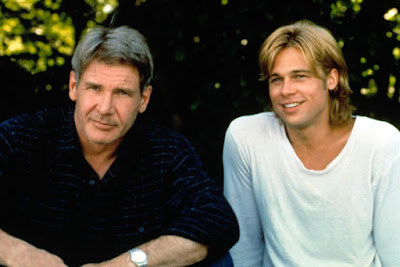 As a collector, I adore my DVD compilations because it sometimes encourages me to go back to a forgotten movie like The Devil’s Own. I made the joke on Twitter that while I was watching it this past weekend, I was probably the only person on Earth doing so. It’s kind of a funny thing if you take a second and think about something like that. There are so many movies, made over so many years and the majority of them are forgotten to the sands of time (e.g. Prince of Persia: The Sands of Time). Writing an appreciation for them is a pleasure.
Posted by Patrick Bromley at 5:00 AM