Some titles to remember Bill Paxton by, plus one of last year's and this year's best. 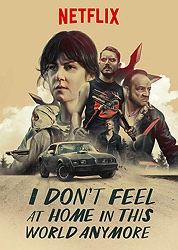 I Don't Feel at Home in This World Anymore (2017, dir. Macon Blair) I mentioned this movie, which debuted on Netflix after winning the Grand Jury Prize at Sundance this past January, on the podcast this week. It's something everyone should watch. Melanie Lynskey, literally the MVP of everything, plays an ordinary woman who is frustrated by the fact that everyone around her is a thoughtless asshole and finally decides to do something about it. Where the movie ends up is difficult to predict based on where it starts, but that's the movie's charm. Actor Macon Blair (of Blue Ruin fame) makes his writing/directing debut here and has clearly picked some things up from his friend and collaborator Jeremy Saulnier, but this doesn't play like an imitation of Saulnier's work. It can exist in the same universe but has its own style and sensibility. It's really good and totally deserving of your attention. Between this and a handful of theatrical genre releases, I can't believe how many good movies we've already gotten in 2017. (Watch on Netflix) 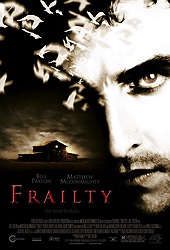 Frailty (2002, dir. Bill Paxton) Yes, Bill Paxton passed away this week. And yes it still hurts. Watching his many excellent movies is a great way to remember the man, so it's cool that a few streaming services picked up his 2002 directorial debut Frailty this week. This movie, more than any of the rest in his enormous body of work, is the one that I saw so many of my friends and acquaintances online calling his most underrated. This might be because so many of my friends online are horror movie people, but I also think it's because this movie, about a father who may or may have lost his mind and enlists his two young sons to help him kill "demons," is really good. If you don't have a Shudder subscription, don't worry -- the movie was also added to Netflix this week. (Watch on Shudder) 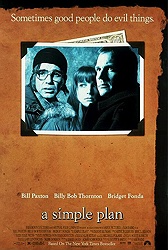 A Simple Plan (1998, dir. Sam Raimi) Another great Bill Paxton film and probably his best performance ever. This dark, dark crime drama provides the ultimate answer to the question "Ok, but what's the downside?" Great atmosphere, great acting, great script, great movie. This was such a change of pace for Sam Raimi and hinted at a new path for his career; instead, he went the blockbuster route. While I'm happy that it means we got his Spider-Man movies, it also means we got Oz the Great and Powerful. If you don't have Hulu, this is also available on Amazon Prime.
(Watch on Hulu) 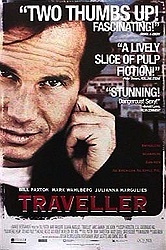 Traveller (1997, dir. Jack Green) I wrote about this movie briefly in my Bill Paxton marathon piece earlier this week (and talked about it again on the podcast), and while it's only a decent movie it's a chance to watch Bill Paxton play a role that's a little bit outside what he is best known for. I have a fondness for it because it reminds me of the smaller crime/noir pictures that were very popular in the mid/late '90s (not the ones that rip off Tarantino, which are insufferable, but the ones that are certainly borne of his wake). You don't even need a subscription to anything to watch this one, provided you can overlook a few breaks for ads. (Watch on Shout Factory TV) 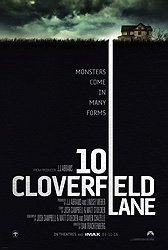 10 Cloverfield Lane (2016, dir. Dan Trachtenberg) One of last year's best movies just showed up on Amazon Prime, meaning that if you're one of the few people who a) haven't yet seen it and b) haven't had it spoiled for you yet, you best get on that shit. Even if it has been spoiled for you, go ahead and watch it because this isn't really a movie that's dependent on twists and surprises to work as well as it does. It's a movie built out of three excellent performances (particularly John Goodman at his all-time best) and incredibly clever, tense direction from first-time feature filmmaker Dan Trachtenberg. I can't wait to see what he does next. (Watch on Amazon Prime Video)
Posted by Patrick Bromley at 12:00 PM