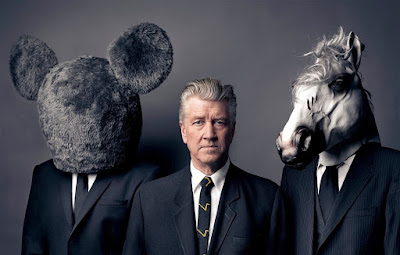 Stream some consciousness with me.


Lynch says in his introduction that this animated film was part of a yearly competition at the Pennsylvania Academy of the Fine Arts in my hometown of Philadelphia. He described Philadelphia as such: “[T]he city was full of fear. A kid was shot to death down the street...We were robbed twice, had windows shot out and a car stolen…The feeling was so close to extreme danger, and the fear was so intense. There was violence and hate and filth. But the biggest influence in my whole life was that city.” You’re welcome, everyone.

This is essentially a single frame looped over and over. I named the figures Sleepy, Cranky, One-Eye, David, Beardy, and Moe. It starts all stark and soulless, like THX-1138, but then they all start throwing up, and then they’re on fire. I wonder what he’s getting at here. Come on, semiotics, don’t let me down. They’re just heads and stomachs: consumption. Capitalism? Is Lynch making a Marxist argument? Is this a protest film? It reminds me of Emilia’s line from Othello: “[Men] are but stomachs, and we all but food.” Emilia was a badass. Alright, this siren is killing me. Moving on.


This one reminds me of a storybook my mom got for my son: The Little Boy Who Lost His Name. It’s really cute. The boy goes on an adventure to reclaim all the letters of his name so he can remember who he is and go back to sleep. This is the nightmare fuel version of that. Like, I’m pretty sure a penis grows breasts. There’s also an operatic voice singing what — if I know Lynch — is the alphabet backwards. That’s pretty sneaky, David. But I caught you. I CAUGHT YOU.

We move into a blank space and the floating “A” becomes a grotesque mishmash of body parts before an animated heart pours a bunch of letters into its head. “Please remember, you are dealing with a human form.” So are we the letters or the girl? I hope we’re the letters, because the girl is horrifying. What is it with painters-turned-filmmakers? Why must my nightmares be their canvas? Is the world that hopeless? Also, never pair peanuts with Cabernet. My mouth is dry as a goddamn desert right now.


Stuff is always sprouting out of tubes! Gooey liquids! This one feels a lot like Eraserhead, notably that they both portray sex and conception as guttural, disgusting exchanges of chemical viscera. BECAUSE THEY ARE. The irony is that Lynch can be such a romantic sometimes. He’s really good at love scenes when he wants to be, so it’s clear that he’s drawing a distinction between the act and the emotion. Also that he loves drawing gooey liquids shooting out of tubes.

Seems like he’s pulling from experience here, too. A young boy is born into a family that doesn’t want him; a lot of shame and degradation. I like that he’s starting to drop little narrative beats into his trippy visuals. Too many people accuse him of being weird for weird’s sake, but he definitely understands narrative structure. He just won’t let it limit him. You do you, David. Don’t be limited. Be Limitless, like Bradley Cooper. You know what connects this movie with Limitless? Philadelphia, baby. They shot it downtown. I saw pictures.

The boy then plants a seed in his bed, and the seed gives birth to…an old woman! This is Lynch finally connecting with the Everyman: Who among us hasn’t planted a seed from which we birth an old woman? It’s kind of sweet, actually. His parents are monsters, so he’s nurturing a kind maternal figure for himself. There’s also an animated sequence of him killing his parents that reminds me of Puff the Magic Dragon. The cartoon movie, I mean. That scene on the sea, with the storm? Holy shit, that scared the crap out of me as a kid. Anyway, I think this little boy died, so let’s move on.


Lynch plays a doctor who cleans Catherine Coulson’s (The Log Lady from Twin Peaks!) amputated leg stumps while she writes a letter. Not much to this one, unless we consider that maybe the amputation occurred as a result of whatever happened between Helen and Jim. It seems like maybe someone set a cabin on fire. “Harry turned on all of the burners on the stove before we left the cabin.” Don’t start fires!

Alright, so there’s the Legless Woman (Log Lady). There’s Helen, and everything is fine between her and Jim. Jim hosted a party, it sounds like, and the Log/Leg Lady was NOT flirting with him. And then there’s Joann, who sounds like a real buzzkill. But who the hell is Paul, and what does he have to do with this? Wait. Is Paul really Adam Kesher? He marries Rita, who is actually Camila Rhodes. “This is the girl.” That whole first part is Diane’s dream. Maybe Diane was the one flirting with Jim. NO HAY BANDA! I’m going to lay down.


Tasked with making a one-minute film using the same conditions as the original Lumiére cameras (no sound, natural light, etc.) Lynch produced this bizarre short that somehow touches on all of his Lynchisms rapid-fire: The police approach a dead girl. A woman looks concerned. A few young, posh-looking women rise from a bed, flanked by a deer. A white frame, and then a naked lady in a water tank struggles as some Leatherface guys…sacrifice her, maybe? Then a cop enters a suburban home and delivers some bad news. It’s like if Lynch took you on a speed date through his fetishes and then threw you out on the curb afterward.

I like this one, though. It’s weirdly refined and kind of beautiful. The shadow of the woman in the window at the end is my favorite part. It’s super unsettling. What is it about that old, overexposed look that is so creepy? It’s like the Zapruder film. Someone somewhere is definitely splicing this footage into conspiracy theory videos and getting thousands of shares on Facebook. “Zionist Moon Men Are Electro-Shocking Our Women! Sad!” The world is a trash fire.

NO HAY BANDA!
Posted by Patrick Bromley at 5:00 AM