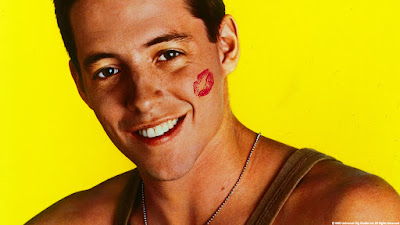 “One should never underestimate the stimulation of eccentricity.”

I’ve always had a thing for movies based on plays. It’s the staging, I think, the way a great playwright constructs a complex dance of performance and dialogue in order to pull mountains of drama out of limited sets and points of view. In adapting for the screen, a great director can then use editing, camera dexterity, and other elements to draw in our attention even more. It doesn’t work for every movie, but there’s a particular kind of story that is best served by a more deliberate pace, a bit of breathing room. Film adaptations like 12 Angry Men and Glengarry Glen Ross succeed because they allow for a bit of that leg stretching (even a bit of showing off). They let the story come to us gradually instead of trying to shove it down our throats. While it’s not the most operatic or loquacious of the bunch, Biloxi Blues (adapted from Neil Simon’s play by the great Mike Nichols) is a thoughtful and underrated coming-of-age piece that overcomes the limitations of the stage while still embracing its intimacy and charm. 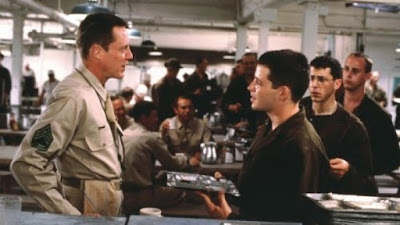 Aspiring writer Eugene Jerome (Matthew Broderick) is twenty years old in 1945, the final year of World War II. He enlists with the U.S. Army and travels to Biloxi, Mississippi for basic training. While he suffers the cruel tutelage of ruthless drill sergeant Merwin Toomey (Christopher Walken), he befriends the big-hearted Don Carney (Casey Siemaszko), spars with oafish lug Joseph Wykowski (Matt Mulhern), and looks with frustrated incredulity at the nebbish and effeminate Arnold Epstein (Corey Parker). Jerome isn’t thrilled to be marching through the sweltering Mississippi heat day after day, but he’s excited to have the kind of life experiences he can work into his fiction. After a week, his journal is packed with tales of hard labor and bad food. A five-dollar session with the lovely Rowena (Park Overall) quickly separates him from his virginity, but what he really wants is to fall in love with the beautiful Daisy (Penelope Ann Miller) and return home to her after the war.

Most of Biloxi Blues is a light and fluffy romp, an exercise in romantic nostalgia that lacks any real meaty movie goodness. But every now and again it strikes a chord, specifically in Corey Parker’s performance as Epstein. His downtrodden skepticism has a way of cutting through the posturing swagger of characters like Wykowski and Roy Selridge (Markus Flanagan). He’s aware of his own deficiencies, but he’s also determined not to let anyone else draw power from them. The army is almost beneath him — he’s long since given up feeling insecure about his lack of masculinity — so he moves with a dogged resolve toward the simplest and most logical conclusions to any given problem. Someone stole money out of Wykowski’s foot locker? It wasn’t him, but he’ll replace it if it makes things easier. Forced to clean the latrines unless he goes on a five-hour march through the swamp? Fine. At least he’ll get some quiet time to himself. His cold defiance of emotion teaches Jerome quite a bit about the nature of friendship: Epstein assures him that they will never be truly honest with each other unless he can read what Jerome wrote about him in his journal. It’s not petty, just logical.

Then there’s Christopher Walken as Sgt. Merwin Toomey. Cinema history is full of great drill sergeants, but there’s something about Walken’s Walkenness that lends itself to positions of authority (there’s a reason The Sicilian Scene in True Romance is so damn good). It’s hard to put any one Walken performance ahead of another, but I saw Biloxi Blues at an early enough age (thanks, Mom!) that this may have been my first foray into Walkenism and probably explains why I’m so afraid of him. Toomey is a coiled spring, not belligerent or dysfunctional, just very proud and a little aloof. Though the film’s final movement takes him to some dark places, there’s a real integrity that defines his point of view. He expects the best of his company and doesn’t mind sacrificing himself if it means they meet that expectation. He leans on Jerome in a way that frustrates the young private at first, but one that he slowly comes to understand. This is Jerome’s test of integrity, of strength. Has he learned the lesson Toomey’s been trying so desperately to teach him, that the army’s discipline and routine make men out of boys? The answer is one of the film’s sweetest and most endearing moments.

But again, Biloxi Blues isn’t perfect, and a lot of its shortcomings fall on Matthew Broderick as Eugene Jerome. It’s not the performance, necessarily, but the writing of the character. Simon wants Jerome to be all things at all times — as sardonic and self-aware as the plot demands one minute, and as clueless and innocent as it needs him to be another. This gets frustrating in an ensemble piece where we’re trying to find our bearings by way of the people we’re following. We need them to have a reliable and consistent perspective, but Simon uses Jerome as a catch-all. Still, he’s a romantic and a dreamer, so we can’t fault him for too much. Broderick’s dopey charm is perfect for his encounter with the prostitute Rowena; he has zero idea what he’s in for, but he approaches the task with optimism and is rewarded with, well, the best reward of all. It’s in these moments that we remember Simon is still writing a coming-of-age story. Jerome is still learning how the world works and how he’s going to relate to it. He’s a writer learning about archetypes and finding the theme of his journey. 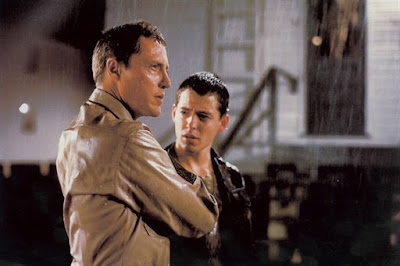 Biloxi Blues probably won’t land on anyone’s list of favorite war films, but that doesn’t mean it isn’t saying something significant about the people who fought in our great conflicts. They’re real people — kids, most of them, each one learning their own lessons and grasping for their own identities. It’s a film about honesty and passion, about why we fight in the first place. People are punished for being soldiers, for being scholars, for who they love and why they love them. But they’re rewarded for those things, too. And so we return to the stage, to Nichols’ brilliant decision not open up the film for scale any more than necessary — to allow the script’s most brutal and sincere scenes to play out in long takes with complex blocking and emotional punches that come in waves rather than cutting them up into jerky coverage. There’s something comforting about that, I think. Something honest. Something that allows us to look back at a violent and tragic chapter in our history with a sense of purpose and a bit of pride, the same way Jerome eventually would in his play. In the end, it makes the whole thing feel worthwhile.