Off the Shelf: We Are the Flesh 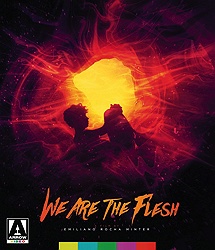 I literally have no idea what to say.

I have been hearing about We Are the Flesh (Tenemos la carne), a new Mexican horror film from writer/director Emiliano Rocha Minter, since it played the festival circuit last year and reviews that weren't just positive but were of the "you won't believe what you're seeing" variety. With this in mind, I went into the movie with some apprehension, expecting to see some really gnarly violence (I knew there was a cannibal element and nothing more). The good news is this: that does not describe We Are the Flesh, a movie that doesn't feature a ton of gore but which is fucked up in ways I was not prepared for. Therein lies the bad news. We Are the Flesh wants to push buttons, and push buttons it does. I just don't know what to do with any of it. 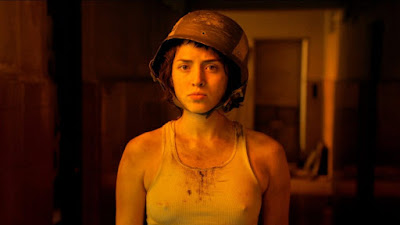 I'm not entirely sure how to describe the plot of the film. There's this super weird guy named Mariano (Noé Hernández), who lives alone underground, hidden away from some hinted-at apocalypse above. A sister and brother (María Evoli and Diego Gamaliel) find their way underground and Mariano takes them in...only with some conditions. Things get increasingly fucked and then more and more people get introduced into the mix, which only makes things weirder and more psychotically debaucherous. Past that, I'm at a loss for words.

I would never say We Are the Flesh is a "bad" movie. It is a challenging one, existing somewhere at the crossroads of Jodorowsky and Gaspar Noé. It is surrealist and incredibly bleak about human nature. It is horrifying in the ideas it offers and some of the imagery, though more so in a moralistic way than in anything particularly violent. The sex in the movie appears to be unsimulated, though I cannot say for sure. The graphicness of the fucking is not what's going to upset some (though it will for sure), but rather who it is that's doing the fucking. This is a movie that goes out of its way to be depraved. It is about depravity -- about finding a family in depravity, actually, and then fucking that family. 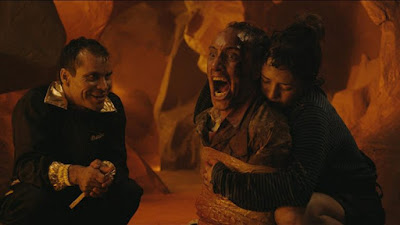 Though they're best known for releasing classic horror, exploitation and cult movies, Arrow Video is putting out a new film with We Are the Flesh, presenting the movie in a 1080p HD transfer in its original 1.85:1 widescreen aspect ratio. There are two short films from Minter included, "Dentro" and "Videohome," as well as an interview with Electric Sheep editor Virginie Sélavy on what the movie might be all about. There's an hour's worth of interviews with Minter, Noé Hernández, Maria Ivoli and Diego Gamaliel, as well as an image gallery and the original trailer.

We Are the Flesh is a movie to be experienced more than it is enjoyed, and while I can appreciate a filmmaker who is clearly an artist and who wants to push the boundaries of both cinema and taste, the results leave me cold. Your mileage may vary, as there is an abstract and often beautiful quality to the movie that is not without merit. I have little doubt that Minter made the movie he wanted to make and applaud both the independent system that allowed him to make it and Arrow for putting it out on Blu-ray uncompromised. But there are plenty of other movies about weird sexuality and the darkness of the human soul that I would rather revisit.

Email ThisBlogThis!Share to TwitterShare to FacebookShare to Pinterest
Labels: 2016 horror movies, arrow video, blu ray reviews, off the shelf, we are the flesh