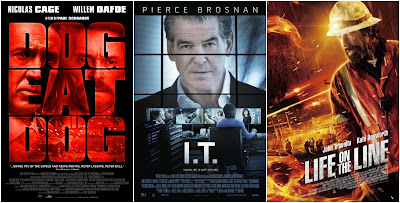 In which movie stars cash paychecks. 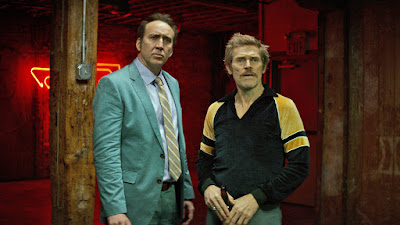 It’s safe to say that even the most ardent genre film fan would approach something like Dog Eat Dog with great trepidation, a kind of nervous optimism that keeps us open to the possibility of an enjoyable experience while still safeguarding us from too much heartbreak. Nicolas Cage, Willem Dafoe, and Paul Schrader are known quantities, names we usually like to hear because we understand what each of them brings to the table and what each of them can be at their best. But then there’s that cynical undercurrent of creeping dread: What gear will Nicolas Cage be in, and how long will he stay in it? Will Willem Dafoe get the chance to develop a real character, or is this one of his Smirk in the Background roles? Are we getting Taxi Driver Paul Schrader or Dominion: Prequel to the Exorcist Paul Schrader? Most crucially, will any of it work?

Dog Eat Dog is ugly, sloppy, disjointed, and insane, but it works. Cage plays Troy Something, fresh out of prison but very likely to go back soon. He and his buddies Mad Dog (Dafoe) and Diesel (Christopher Matthew Cook) return to their usual small-time stick-up jobs, picking over the scraps left by the bigger Mafiosi (specifically Schrader himself as El Greco) until the opportunity arises for One Last Score. Some guy knows/has something, and the only way to get him to tell/give it back is to kidnap his toddler. Or something. It doesn’t matter. The point is that Cage – whose resume includes at least one notable baby theft – takes the job with aplomb and sets his bumbling boys about their work. This is their last shot to earn themselves a normal life, they figure, so it’s do or die.

The wacky gangster plot is mostly par for the course here, but the real draws are the characters. Troy is the put-upon straight man, giving Dafoe’s Mad Dog an opportunity to shine as the murderous psychopath who just wants to be loved. He and Diesel (more the quiet, hulking panda bear type) personify the film’s frantic, abject nihilism while infusing it with a kind of tragic romance. These broken men constantly apologize for being broken, and Mad Dog’s earnest self-reflection is a genuine highlight. It’s in this juxtaposition of brutal violence with absurd comedy that Dog Eat Dog finds its groove, like when Diesel composes himself after dramatic outbursts or when Mad Dog politely instructs a housekeeper to step over exploded-head blood on the floor. Another bit finds Troy begging a prostitute to join him when he visits his childhood vacation spot in Nice. It’s pretty funny, and it’s Schrader’s handle on genre and tone that keeps the film from toppling over into incoherence. Dog Eat Dog is not for everyone, but it has the balls to be honest. That counts for something, right? 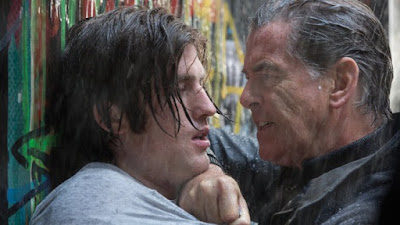 A low-rent techno-drama straight out of 2002, John Moore’s I.T. is – at its best— a misguided warning about the dangers of the digital age and –- at its worst – just a dumb, dumb movie. Pierce Brosnan’s Mike Regan is a powerful CEO poised to take his company public. He lives with his beautiful wife Rose and daughter Kaitlyn (Anna Friel and Stefanie Scott) in a state-of-the-art smart home with a master computer controlling everything from the security system to the kitchen faucets. When that computer needs maintenance, Regan calls I.T. guy Ed Porter (James Frecheville) who, despite his floppy 2000s emo hair, seems a decent fellow. Porter catches the eye of seventeen-year-old Kaitlyn and, because Kaitlyn is apparently very stupid, she starts inviting this full-grown adult man to cheerleading matches and family parties. Regan objects, Porter pushes back. You get the idea. Soon, Porter is terrorizing the family, posting nude videos of Kaitlyn online and screwing with Regan’s business interests.

Despite all the hubbub, I.T. is pretty lame. John Moore (Max Payne, A Good Day to Die Hard) makes some stylistic choices that might have been edgy and intense if he had any kind of budget to work with, but that washed-out frenetic look comes off as really cheap and lazy in this context. Pierce Brosnan, probably looking to join Liam Neeson and Kevin Costner on the Wronged-Action-Dad bandwagon, looks bored and confused. His Regan’s technophobia is supposed to read as an important character beat, but little ever comes of it and he doesn’t even seem all that capable a CEO. He seems to strain himself just by reading his Maserati’s owner’s manual (which he is literally doing in one scene). James Frecheville doesn’t get to act as much as putter and pout, leaving his villain comically flat; he’s got one of those Hollywood Hacker apartments with the wall of screens and constant background thrash metal. Nothing seems to be motivating his obsessions aside from angst, and he more or less exists to give Regan something to aim at.

Still, the film is mostly inoffensive, and there’s some Bad Movie fun to be had for those into that sort of thing. A computer expert named Henrik helps Regan break into Porter’s house and then disappears from the movie entirely. Brosnan plays a whole sequence with a burlap sack over his head, which is kind of funny, and there’s a steamy shower masturbation scene so stilted and awkward that you may actually wonder if they used a mannequin torso for the close-ups. Regan also finds Porter in the street and just starts kicking the shit out of him at one point, as if everyone suddenly remembered that they hired James Bond in their lead role. I.T. could have used a lot more of that absurdity. It could have leaned more into set pieces — one fun bit has Porter hacking Regan’s brakes over video chat and flipping his car into the guardrail — but we get the sense it just wasn’t in the budget. The whole thing is forced and insincere, squandering Pierce Brosnan and the goodwill that comes with him. 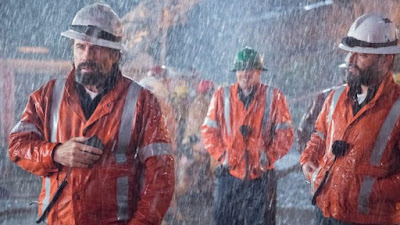 It’s hard to be a snarky asshole about a hopelessly bland and incompetent film like Life on the Line because its heart is so clearly in the right place. Aimed squarely at the American Heartland, it wants to be about the heroes whose stories are often ignored, the everyday working people who risk life and limb to keep the lights on. Firemen, police officers, and EMTs get their due in film after film, but no one talks about linemen (except, you know, in that one song). You can see how difficult it’d be to make utility work sexy enough for the screen; you’d have to pitch something about haunted power lines or something, so it’s nice to see a project like Life on the Line come together. It’s also nice to see the filmmakers make the most of their opportunity: As the credits roll, they showcase some of the real linemen who have died on the job and provide information about the Fallen Linemen Organization, a charity that supports their families. These are worthy endeavors, for sure.

But all this makes the film’s bumbling ineptitude that much harder to swallow. There is no propulsive, cohesive narrative in Life on the Line, but there are a number of plot threads playing in (sometimes completely random) order:

1. John Travolta is Beau, a Reformed Fuck-Up whose carelessness on the job led to the death of his brother some years back. He’s now the company foreman and living with
2. Kate Bosworth as Bailey, Beau’s niece. She takes care of her uncle and works at the local diner. She’s supposed to be in college (like you are in your early 30s) but she’s wrapped up in her feelings for
3. Devon Sawa as Duncan, Bailey’s on-again-off-again. His hesitance to commit to Bailey stems from insecurity about his dysfunctional mother (Sharon Stone, literally credited as “Duncan’s Mother”), but he’s attempting to shape up by working on the line with Beau. His competition for Bailey’s affection is
4. Matt Bellefleur as Ron, Local Douchebag. He and Bailey had a fling she’d rather forget, but he’s committed to stalking her until she relents. He kicks up trouble wherever he can, specifically with 5. Julie Benz as Carline, new-in-town housewife. She befriends Bailey out of loneliness, but also seeks comfort in other places. This angers
6. Ryan Robbins as Eugene, Carline’s husband and Iraq veteran. Crippled by PTSD, he’s cold and severe, suspicious of Caroline and unpredictable on the line. He and the other men must come together as a team because
7. A storm is on the horizon, and Beau must get the new electrical equipment safely installed before it hits.

Everyone is in their own movie. Everyone is miscast. We’re expected to care about conflicts between characters who’ve never met before and will never meet again. There so many identical white dudes in Life on the Line that I had to start giving them nicknames like Ham & Cheese and Grocery Bag in order to tell them apart. David Hackl (Saw V) does his best to make things feel big and important, to lay the fate of Texas squarely on Beau’s shoulders, but it just doesn’t work. Travolta just looks lost. There are flashbacks, wrap-around stories, and possibly a dream sequence or two (it’s so hard to tell). There’s even an Apollo 13 control room element going on in the background; a bunch of guys stand there cheering in self-congratulation while Travolta drives across county lines in a torrential downpour to get shit working again. Worst of all might be “Life on the Line,” a country ballad that sounds like someone making fun of country music: “Baseball, apple pie, pickup truck!” Shit like that. Life on the Line is a frustrating appeal to Americana that does more harm to its cause than good.
Posted by Patrick Bromley at 5:00 AM