All the Pieces Matter: The Social Network 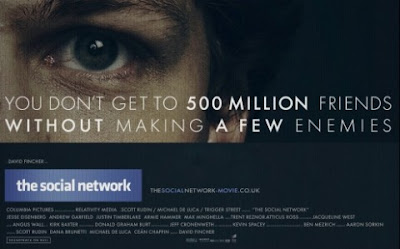 Saying the name “Aaron Sorkin” out loud at any gathering of nerds will provoke a number of different reactions, and at least one of them will be an aggressive, defiant, Liz Lemon-esque eye roll. For all of Sorkin’s success in film (A Few Good Men, Steve Jobs) and television (The West Wing, Sports Night), many people find his work repetitive and obnoxious, a blur of self-indulgent and pedantic mansplaining given an artificial sense of importance by the now-famous Walk and Talk. He’s a tragically un-woke William Goldman wannabe so far up his own ass that he can’t even see how poorly his female characters are written or how few of us in the audience understand his constant Gilbert and Sullivan references. And for sure, there is an arrogant white maleness to Sorkin’s writing that can be absolutely off-putting in certain contexts, and pairing him with an obsessive-compulsive sociopath like director David Fincher to tell the (mostly fictional) story of an even greater obsessive-compulsive sociopath like Mark Zuckerberg seems like the worst idea ever. Instead, it gave us The Social Network.

The thing you have to remember about Aaron Sorkin is that he is a musician. He composes with syllables rather than notes — and I’m aware of how douchey that sounds — but he’s a musician all the same. Yes, he can write artsy monologues and bombastic tirades for Martin Sheen to deliver in Latin, but what really distinguishes his work is the way he creates rhythm and percussion out of dialogue exchanges between multiple characters. There is a sing-songy reflexivity to his best writing that evokes the verse-chorus structure of popular music. Melodies will compete, find harmony, and then resolve at the end of a measure before moving to the next one. Not only that, but each of these exchanges has its own little act structure: a number of problems and ideas are introduced, complicated, and brought to a climax at the most resonant moment. When properly directed and performed, these exchanges can carry the same weight and action as the most visually-driven sequences (sometimes it’s okay to tell and not to show), developing narrative and character at once.

Anyway, The Social Network. Pop it in and go to the first scene, which you’ll notice begins with a blank screen and some dialogue set against the din of a crowded bar. It’s a full nine seconds before we fade in on that bar, which means we’re being told right away that listening to this film is going to be as important as watching it. They don’t make it easy for us, either; it’s actually really hard to hear what Mark (Jesse Eisenberg) and Erica (Rooney Mara) are saying at first. The music and bar noises gradually fade down a bit, though, as Mark gets into his desire to distinguish himself amongst a crowd (we see what you did there, movie). Note the way Fincher stages the conversation in classic shot/reverse shot style until we come to the idea of Final Clubs and he hits us with two close-ups. It’s almost visual punctuation, a way to put a stamp on the importance of that one moment in what is, frankly, a bizarre and confusing conversation between two people we just met. But again, it’s melodic: China, Final Clubs, SATs, a capella, crew — each is introduced on one side and then passed to the other, like a back-and-forth game of ping pong. 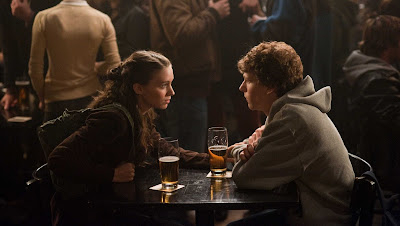 Sorkin then sets up the next movement, which clarifies relationship dynamics and introduces internal conflict. Mark calls Erica “delusional,” and Erica tries to calm him down with some folksy wisdom and remind him that this is the real world and the two of them are on a date. Note how Mark’s line “Would you like to talk about something else?” is presented in a wider master shot to emphasize the distance between them. Erica goes to ask a question (to return to their previous rhythm), but we’ve already crossed a threshold into Mark’s insanity, a ramped-up diatribe about punching pork (gross) and so on. This second section highlights Mark’s motor mouth and Erica’s inability to make sense of it. It’s the aforementioned plot complication in this little one-act, and it’s done almost under our noses. Erica complicates things even more by asking which of the Final Clubs is easiest to get into. Fincher moves to close-ups (again, visual punctuation) to emphasize the tension. It’s a good time to point out how much movement and energy this scene about two people sitting in chairs has created with roughly four static shots. 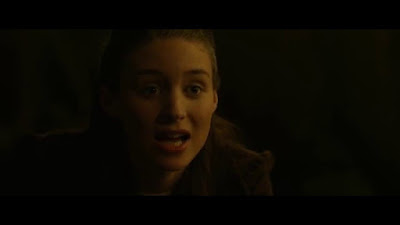 “Mark, I’m not speaking in code!” We return to those familiar over-the-shoulder positions as the tension dies back down a bit. ‘There’s a difference between being obsessed and being motivated.” This is one of those pads Sorkin occasionally likes to land on (imagine a drummer hitting a crash cymbal), and this one in particular does a nice job of giving Erica some agency before Mark’s big ramp-up. The scene is now pitched in a particular direction, and we’re starting to piece together where it’s going and who we’re meant to side with. While it’s hard to argue that Sorkin doesn’t exclusively seem to write erudite characters with genius IQs — something else that annoys his detractors — the difference is that Erica has the intuition and empathy that Mark lacks. She is motivated, while he is obsessed. That distinction matters in the last third of the scene, the moment he has the unmitigated temerity to suggest that Rooney-fucking-Mara wouldn’t have access to exclusive Harvard parties unless she’s invited by his scrawny, dimwitted ass. That’s the last straw.

Again, look at the dialogue like dueling banjos and notice how Erica takes control in the last two minutes by using Mark’s tactics against him. She throws something out, he asks for clarification, repeat, repeat. “You don’t have to study…because you go to B.U.!” He doesn’t even realize how much of this was his fault. He doesn’t even realize what he did until it’s too late (I like the way Eisenberg plays Mark’s forced sincerity on the line “I’m sorry. I mean it.” He sits up straight and looks right into her eyes as if he’s been watching YouTube videos on human social cues). There’s a nice rapid-fire cool-down about being friends and Mark’s OS class before Erica drops the film’s thesis like a ton of something heavy that’s not as cliched as bricks: “You are probably going to be a very successful computer person, and you’re going to go through life thinking that girls don’t like you because you’re a nerd. I want you to know, from the bottom of my heart, that that won’t be true. It’ll be because you’re an asshole.” Sorkin understands that the best way to pay off all the verbal gymnastics is to close on one concise, dramatic beat, and Fincher has the good sense to push the camera in close to sell it. Oh, bye Mark!

Special thanks to writer/podcaster Lani Diane Rich for helping inspire this column and contributing some key points. Check out her great work at chipperish.com!