But Don't Let Her Be Funny 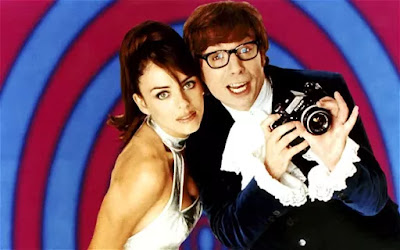 I want to sing the praises of a certain kind of comic performance.

A week or two ago, I was watching a few minutes of the mostly-forgettable 2001 romantic comedy America's Sweethearts on cable and I was struck by something: it's not a very good movie. But I was also struck by how good certain elements are, primarily the performance by Catherine Zeta Jones as spoiled, self-centered movie star Gwen Harrison, whose promotion of a new movie co-starring her ex-husband Eddie Thomas (John Cusack) provides the main thrust of the plot. Zeta Jones has made a career out of playing unattainable women; her dark and almost impossible beauty coupled with the hint of her remaining Welsh accent give her an air of...well, let's just call it superior breeding. There is something regal about her -- she's born to play the woman on the pedestal, not the Girl Next Door. 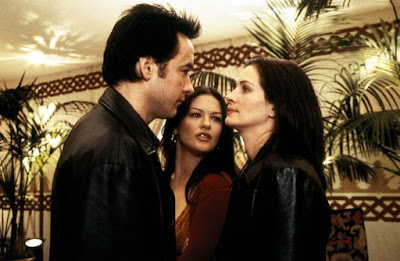 Zeta Jones is really funny in America's Sweethearts. Like, really funny. Maybe it's because she's playing a vain, high maintenance actress navigating Hollywood and it's territory she knows well, but Zeta Jones commits to the bit, never trying to distance character from performer to let us in the audience know that yes, some actresses are like this but she's not one of them. But then it occurred to me that Zeta Jones has been funny in a number of movies -- High Fidelity and Intolerable Cruelty among them -- despite not really being known for being a comedian. Her best performances tend to be given in supporting roles: not just America's Sweethearts, but also High Fidelity, The Phantom, Chicago (for which she run an Academy Award for Best Supporting Actress). I think Catherine Zeta Jones is like a female Brad Pitt: a character actor trapped in the body of a movie star.

At least America's Sweethearts and High Fidelity give her the space to be funny (opposite John Cusack in both cases). Intolerable Cruelty, one of the two Coen Brothers movies for which most of us have to make an exception -- the Joel and Ethan equivalent of "I like all kinds of music...except country" -- asks Zeta Jones to play the straight woman while all the men get to run around being clowns and getting laughs. This is nothing new, as the comedy genre has been a boys' club for many, many, many years, but the difference here is that Zeta Jones is actually giving a great comic performance while not actually given opportunities to be funny. I think George Clooney is really funny in Intolerable Cruelty (I actually kind of like the movie overall), but I think he's funny because of Zeta Jones. She's the one setting him up. She's the one providing the chemistry. She's the one giving him something to play against, but she gets roughly half-to-none of the credit. 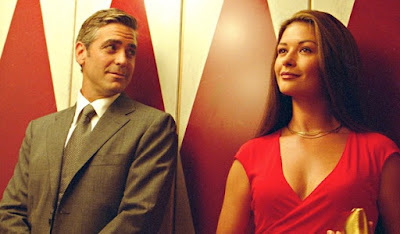 Again, this isn't anything new. The history of Hollywood is lousy with female stars being exploited to prop up their male counterparts. Once upon a time, though, the women were given ample opportunity to be onscreen equals or even, dare I say, the ones actually getting the laughs. Go back to the screwball comedies of Myrna Loy, Carole Lombard and Rosalind Russell. I defy you to tell me that Barbara Stanwyck doesn't eat every one of her male co-stars alive on film. At least Preston Sturges understood that phenomenon and figured out a way to make it funny. Somewhere along the way, though, the roles for women in comedy became something different: they were the put-upon girlfriend, or the put-upon wife, or the would-be girlfriend or the would-be wife. They became plot points and not characters. There have always been exceptions, of course. Goldie Hawn was a comedy star who could headline her own movies in the '70s and '80s. Same with Whoopi Goldberg and Diane Keaton and a handful of others.

I'm not really writing this to talk about a lack of opportunity for women in comedy, though. Not really, even though that has existed for a long time (and by "comedy" I mean "all film"). I'm writing this to champion some contemporary performances from women in comedy that don't often get the credit they deserve. I remember seeing The Mask back in 1994 (I know I said "contemporary," but here's a movie that's more than 20 years old [!]) and not thinking it was all that funny -- like Tommy Lee Jones, I could not sanction Jim Carrey's buffoonery -- but being struck at just how good this new actress Cameron Diaz was. She was beautiful, yes, Most actors are. What really turned my head towards Diaz was the way she held the screen opposite Carrey as he mugged and jumped and danced and barfed up a lung to get laughs, even assisted by CG animation to make his character that much more cartoonish. Diaz didn't have to do any of that but still drew my total focus with just how grounded she made it all feel. Sometimes giving a great comic performance isn't about getting big laughs, but rather about creating the space where the laughs can exist. That's what Diaz does in The Mask. Jim Carrey's character is worth caring about and laughing at only through Diaz's eyes. That's not an easy thing to pull off on screen, and yet years later people still talk about Carrey's work even though it's Diaz who gives the comic performance of the film. 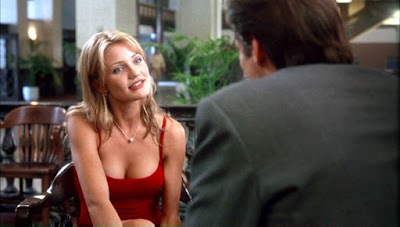 A similar argument could be made about Elizabeth Hurley in the original Austin Powers: International Man of Mystery. Few comedies have been as beloved or overly-quoted in the last 20 years than Austin Powers, a movie that didn't do much upon release but become such a hit on video that it inspired two more sequels, each with diminishing returns. My own reactions to writer/director Mike Myers' brand of wig-and-makeup character comedy has cooled over the last two decades; what I found amusing on opening day 1997 I know find tiresome and strained. What I have never tired of is the performance of Hurley as Vanessa Kensington, the British secret agent who is partnered with the recently-thawed relic of the swinging '60s that is Austin Powers. Like Diaz in The Mask, Hurley gets hardly any jokes but sells the movie's laughs by being the presence that places everything in reality. Austin is a joke; Hurley gets us to take him seriously. I'm reminded of what Pauline Kael said about Rain Man, in that (I'm totally paraphrasing) Dustin Hoffman gets to be all showy but Tom Cruise gives the movie's greatest performance. I've always thought the same thing about Hurley in Austin Powers; if you're not convinced, just consider Myers' comic foils in the two sequels. The reason the original movie remains the best is because Hurley grounds things and can stand toe to toe with the comedian in a way that Heather Graham and Beyonce aren't able to. Knowing what I know about Mike Myers, I'm not sure that's an accident.

Hurley should have done more comedy. She doesn't act much anymore, but outside of Austin Powers she never really got a fair shake in the genre; there was a trophy role in 1999's EdTV and, more famously, her role as the devil in Harold Ramis' underrated remake of Bedazzled. Hurley's good in the movie, but her role consists primarily of dressing up in sexy outfits and vamping it up. It's her co-star Brendan Fraser who gets to be "the funny one." And he's funny! But neither he nor Hurley's costuming should totally take away from the fact that she's really good in comedies. 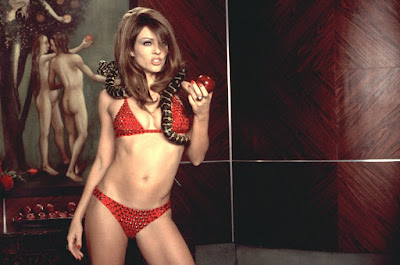 Things have gotten better in the decade or so. There has been a pretty significant upswing in the number of female comedy stars given the chance to be more than just the straight person, as actors like Melissa McCarthy, Amy Schumer, Tina Fey, Kristin Wiig, Anna Faris, Amy Poehler and a host of others have become big box office draws. Even Cameron Diaz is now recognized not as just "the love interest" but as a comedy star of movies both decent (Bad Teacher) and terrible (The Sweetest Thing, Sex Tape, The Other Woman). There will still be the list of actors who agree to appear in Happy Madison productions opposite Adam Sandler or one of his buddies as the beautiful, patient love interest and nothing else because it's a paycheck in a hit movie; established movie stars like Kate Beckinsale, Katie Holmes, Salma Hayek, Joey Lauren Adams, Patricia Arquette, Rosario Dawson, Christina Ricci, Winona Ryder, Jennifer Aniston, Michelle Monaghan, and Marisa Tomei have all taken turns in this role, with only three-time co-star Drew Barrymore ever getting anything to do. But as Sandler heads over to Netflix and women headline more and more big theatrical comedies, hopefully we can be better about opening up the scope of what we're looking at when it comes to some women in comedy films. Look past physical appearance. Look past the clowns to the left of her, the jokers to the right. And if we're not going to allow some actors the opportunity to be funny, let's at least appreciate how great their performances are -- whether we're laughing or not.
Posted by Patrick Bromley at 12:00 PM