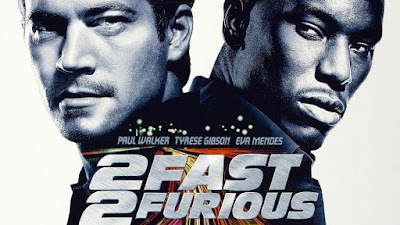 What you gonna do? Act the fool.

As we continue to unofficially celebrate the Fast & Furious series in the lead up to The Fate of the Furious, I want to shine a spotlight on what I think is the franchise's most underappreciated effort: 2003's 2 Fast 2 Furious. 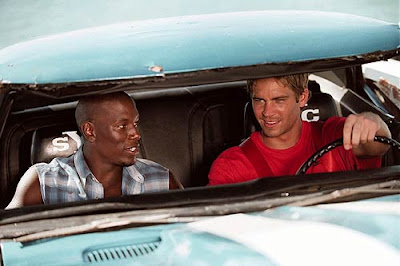 A few days ago, Rob DiCristino made an excellent case that the Fast & Furious franchise as we know it is indebted to the fourth installment, Fast & Furious, which I still consider the weakest entry in the series. All of the points Rob makes are valid and true (he is a smart person and HANDSOME), but I'd like to extend the case that he so effectively makes and suggest that 2 Fast -- the entry considered to be the worst by those that don't rank Fast & Furious below it -- has a lot to do with where one of the biggest film franchises in the world would end up. A big part of the appeal of the series, which I enjoy a hell of a lot in defiance of a week's worth of social media postings from hipper-than-thou critics who are pretending to be surprised that anyone could like these movies, is that they are a great deal of fun. Goofy, dopey fun. There may not be an entry in the series that's goofier or dopier than 2 Fast 2 Furious.

Here's the weird thing about 2 Fast: as a sequel to the original The Fast and the Furious, it's not very successful. It only carries over Paul Walker, reprising his role as Brian O'Connor (Vin Diesel passed on the follow-up so he could make xXx because the things he's gonna do for his country), even though "reprising his role" is too generous a description. The Brian O'Conner we get in 2 Fast is hardly a character, with Paul Walker hardly giving a performance -- he's just a bro who's somewhat slack of jaw and likes to drive. Watching this and Fast Five back to back, I was struck by just how much better an actor Walker had become and how much more interesting his character became when he returned a little more grizzled in Fast & Furious. Toss in a couple of half-assed references to O'Connor "letting that guy go in L.A." and you have the sequel's only efforts to tie itself back to the first movie. The location is changed -- Miami instead of L.A. -- the tone is much less self-serious and even the genre has changed, becoming more of a buddy picture than the Point Break redux that precedes it. I completely understand why someone would have seen this movie back in 2003 and not loved it. I had the same reaction. 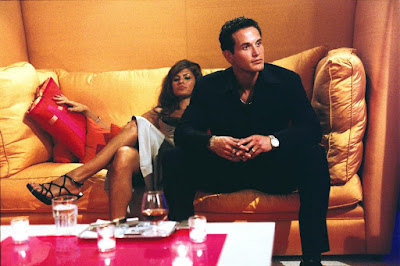 But this is the rare sequel that actually improves the bigger the franchise gets. As more and more Fast & Furious movies are released, 2 Fast becomes just one piece of a larger puzzle; there's no longer the pressure for it to live up to its predecessor, but rather to simply be one entertaining entry in a longer saga and to distinguish itself from the other movies. It does both of these things. In fact, many of the ways in which it departs from The Fast and the Furious helped create the template for the series, which has become known for changing up the locations and the genre from movie to movie (though it feels like the franchise has stalled out on this last point, as parts 5, 6, and 7 all feel like increasingly bigger versions of the same movie). Whereas the original film's conflict was primarily the internal strife of Brian being an undercover cop and having to betray his new family, 2 Fast was the movie that established the idea of our gearhead heroes using their driving skillz to take down a bad guy -- in this instance Cole Hauser in a performance that's either bad or sublime but incredibly entertaining either way.

Hauser's villainous Carter Verone (dat name!) exists somewhere between a Bond villain and a stock bad guy from Miami Vice, mostly just concerned with drugs and money but not above threatening a guy with some elaborate torture involving a live rat. He's one of several indicators that 2 Fast is willing to go a little bigger and broader than the first movie, which was more or less grounded in realism. (And stealing DVD players. Always DVD players.) Another example is when the cops fire some sort of device into the side of Brian's car and disable all of its electronics, marking an early appearance of the kind of high-tech bullshit that would become a regular trope of these movies (we see more of this with the ejector seats in the finale). It's a small step, sure, but that's as it should be; the series has to build towards the large-scale lunacy of Fast Five and cannot be transformed overnight. The climactic showdown, in which Tej and sentient doll Devon Aoki lead a massive shell game involving dozens of decoy getaway cars while Brian and Roman launch a car onto a boat, is totally the predecessor to the big-twist heist in Five and the larger scope/increasingly impossible car stunts of the subsequent sequels' finales. So much of the DNA of what makes this series fun can be traced back to 2 Fast. 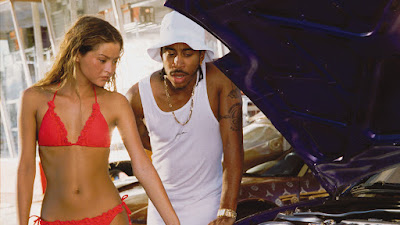 Of course, the real contribution 2 Fast makes to the series is the addition of new characters Roman Pearce (Tyrese Gibson) and Tej (Chris "Ludacris" Bridges), a guy who here just organizes a street race but a few movies from now is revealed to be an expert computer hacker. Tyrese's Roman is all posturing swagger here, with the model/singer/actor clearly relishing the opportunity to play the lead in an action movie and trying to come off all hard and shit. It's telling that his best moments are the lighter ones when he's the butt of a joke, as that's the exact direction his character would be taken for the remaining films. These days, Roman is primarily comic relief -- a fast-talking blowhard who can't really back his shit up. He fits better into the larger group dynamic than he does as half of a buddy duo, even though I have to admit I'm charmed by his constant eating and "We hongry" catchphrase.

I know I should mention Eva Mendes, who plays the third lead as undercover US Customs agent Monica Fuentes. Unfortunately, there is little to be said about her because the movie does her no favors. She is a breathtaking afterthought, on screen to be gorgeous and eventually need rescuing. This is especially unfortunate because the Fast & Furious films eventually began offering equal opportunities for its female characters to be as badass and proactive as its males; I guess that memo had yet to be written in 2003. It appears that Mendes is set up to be Paul Walker's love interest, but so little attention is paid to this storyline that when they actually do share a kiss it's completely jarring, as though everything leading up to that moment had been cut out of the movie. Maybe it was. 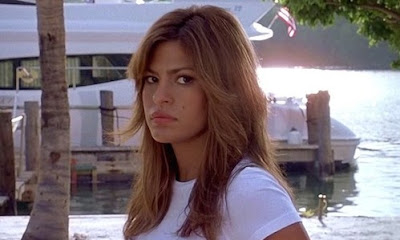 Calling the shots this time out is John Singleton, a director of reasonable talent but often questionable taste. Once a director of important "issue" films, Singleton's filmography has slowly turned towards genre films like Four Brothers the Shaft remake, finally bottoming out with the Taylor Lautner vehicle Abduction in 2011. He doesn't bury the lede in 2 Fast, pimping out the Universal logo in the opening seconds and letting viewers know his sequel will have a very different energy from Rob Cohen's grittier original. The colors are cranked way up, particularly during the first racing sequence that Singleton and DP Matthew Leonetti shoot to look like live action anime; even the blurring backgrounds when Paul Walker hits the NOS feels like an old Speed Racer cartoon. I don't know how much say Singleton had in making one of the leads a person of color, but it's nice to see some of the franchises rightly-celebrated diversity begin to take hold here. You may not like a lot of the choices Singleton makes with his sequel, but you have to at least give him credit for putting his own stamp on the film. 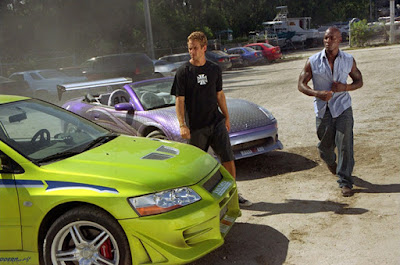 I know I can't sell people on this movie being good. I don't even think I'm arguing that case. But I do think it's very entertaining and a lot of fun to the point that this and Fast Five are the franchise entries I return to the most often. It offers a different flavor than any of the other films -- pure sugar rush -- and though it was impossible to know at the time, lays a good deal of the groundwork for future installments. The reason that Fast Five is the most satisfying entry and the one that really redefined the trajectory of the franchise is because it's the one that pulled together all of the best pieces from the previous four films. That's would not have been possible if those movies hadn't been building towards something bigger, in this case without even realizing it. 2 Fast 2 Furious is joyfully brainless and oddly good-natured, boasting what I believe to be the lowest body count of the series (in that I don't think anyone is killed). I know it's unlikely to make it to the top of anyone's franchise rankings, but by pointing out all that's good about it, maybe I can at least keep it off the bottom.