Second Comings: The Hills Have Eyes 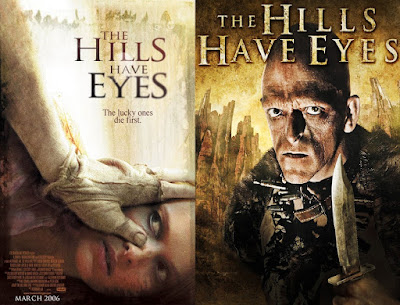 When I think about the inspiration behind this column, I remember that the whole reason I wanted to look at horror remakes in the first place was to try to eliminate the popular notion that remakes are doomed to fail and be horrible. Because the remakes we’ve looked at so far have either shown to be extreme disappointments or proven that a remake can only be as good as its original, I wanted to look somewhere new for a retelling that surpassed those expectations and could be argued to be superior to its initial version. That’s when I looked to Alexandre Aja’s 2006 remake of Wes Craven’s classic: The Hills Have Eyes. If you know me, you know that I rarely ever tolerate Craven slander, but I found that it was a little difficult to get through his 1977 original upon re-visiting. I was afraid the same would apply to Aja’s remake (which was produced by Craven himself), but what I found was only the most pleasant of surprises. 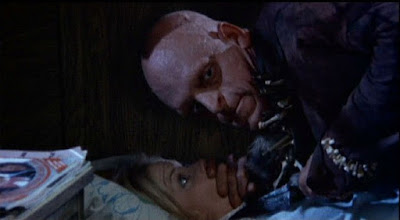 When it comes to their characters, we are presented in both versions of the film with the exact same people. Hell, the characters even have the same names as in the original, which I find doesn’t happen very often. We’ve got our typical American family, the Carters, which is made up of our parents, Bob and Ethel (played by Russ Grieve and Virginia Vincent in the original and by Ted Levine and Kathleen Quinlan in the remake), siblings Bobby (Robert Houston/Dan Byrd), Brenda (Susan Lanier/Emilie de Ravin), Lynne (Dee Wallace/Vinessa Shaw), her husband Doug (Martin Speer/Aaron Stanford) and their baby Katy, not to mention their pet German Shepherds Beauty and Beast (real clever), which are also in the remake. The family dynamic is extremely similar between the characters and the nature of their relationships are generally identical. Still, I can’t help but prefer the Carters in 2006 and I think a big reason for this lies in the chemistry the cast has with each other. It feels like watching a real family take a seemingly harmless vacation that turns into a nightmare. The characters feel more like real people because they each are developed to have qualities that make them feel like individuals as opposed to just one big band of travelers.

For instance, Brenda (the youngest daughter) is much more of an unlikable brat towards the beginning of the remake, but her character develops into someone the audience is able to sympathize with by the end. Come on, she just wanted to go to Cancun with her friends! I didn’t get the same effect watching Brenda in the Original from Brenda -- or any of the other characters, for that matter. In 1977 and 2006, the most significant development happens in Doug. While in 1977, we do get to see Doug evolve from schmuck to badass, the transformation is WAY more dramatic in 2006. When we meet him, Doug is an extremely passive pacifist who refuses to even shoot a gun, but is stabbing mutated people with an American flag in the name of his family by the time the credits roll.

The remake’s transformation lies much deeper than that, though. It asks the question Craven loves to ask more effectively than the original: what is the normal person capable of when pushed to their boundaries? We see it in Last House On The Left, and even in Scream, but is more effective when the transformation from everyday person to revenge-seeking victim is as drastic as it is in the 2006 remake. We also are introduced to Fred (John Steadman), a senior who runs a gas pump and is in cahoots with the “hill people” (his name is Jeb and is played by Tom Bower in the remake, but for the sake of this article let’s call him Fred to avoid confusion). Fred is also the character I feel has the most distinguishable differences between his 1977 version and the one we see in 2006, but a lot of those lie in his role in the plot, which we’ll touch upon later. Still, it’s important to note that in 2006, we are presented with a much more malicious Fred (or Jeb, whatever) as opposed to the Fred we get in 1977, who doesn’t want any more blood on his hands and chooses to warn the Carters to get back on the highway. This is vital because it makes the family in 2006 feel more like victims, as opposed to the family in the original who are, in reality, just dumb-asses for not listening to a local.

This leads me to our “antagonists”: the hill people. I can honestly say these are some of the scariest villains I have ever been met with because at the end of the day, they’re human. What exactly makes them “monsters” varies from 1977 to 2006. In the original, the hill people are inbred cannibals that rely on Fred to lure families into their trap for food, while in Aja’s remake they seem to be victims of mutations caused by nuclear testing from the '50s. This makes it feel like they display less humanity and are therefore more menacing. While I feel like both of these are equally terrifying, the hill people in 2006 are slightly more effective because we see much less of their side of life, meaning that we subsequently know less about them (and everyone knows there is nothing scarier than the unknown). I still really love the hill people in 1977, but I feel we were exposed to their world too much to really be scared of them.

The plots are, at their core, essentially the same: an all-American family on and all-American road trip in for an all-American nightmare. That being said, the original does have some flaws that I feel Aja and Craven try to (and do) fix in the remake. For instance, I mentioned before that Fred (or Jeb...whatever, again!) played a huge role in changing the plot slightly from 1977 to 2006. Because Fred warns the family to get back on the highway and it is the Carters who ignored him, it makes it more difficult to sympathize with them. In 2006, Fred has had enough of helping his family too, but because he feels threatened by the Carters he directs them straight into a trap. I know the difference seems minuscule, but that tiny detail turns the story from a lesson in 1977 to a tragedy in 2006. The original takes a family I already didn’t really care about, has them deliberately disobey a warning and get themselves in trouble because of it. I typically love when horror movies are concerned with people who get themselves into trouble, but since this is ultimately a revenge and boundary-testing story, it isn't so effective if the victims are only victims because of their stupid mistakes. I think the whole post-nuclear test site approach the remake takes is also super interesting to look at. I like to think horror movies reflect the fears of the society they are created by, and because 2006 was still a time when the “war on terror” was rampant, it feels like the movie had a lot to say about the more literal horrors that result from war (although I think the American flag being used as a weapon was a little more funny than clever). I think that while the original has a great standard plot, the remake takes it and polishes its flaws into a more sound and emotionally investing revenge story.

Looking at other things both versions of these movies had to offer is a little difficult. I am fully aware of the advantages the 2006 remake had in terms of technology and the budget available. I am also a firm believer that you don’t absolutely need either of those to make a great horror movie (see: The Evil Dead), though I can’t say it doesn’t help. The Craven original was an extremely cheaply made exploitation film, having a budget of $230,000, but it worked because it never pretended to be anything but that. The remake (having a much larger fancy Hollywood budget) was able to afford great special effects that modernized Craven’s story and just made it more accessible to a new generation of viewers. That being said, I don’t think the flaws Craven’s version had were due to budgeting or special effects and had more to do with the storytelling elements. I think it was smart that the hill people in the 1977 original were simply inbred cannibals because it saved Craven a lot of money in trying to make them look like mutated monsters. That being said, I also really love the makeup and special effects the remake uses to make its hill people look super fucking creepy.

Both movies are also extremely generous when it comes to the ruthless gore and brutality they provide us with. The original was initially granted an X rating and deemed too violent, but the remake is just as (if not more) violent and gory, despite facing less criticism than the 1977 version. I feel like this is because Aja justifies the violence with intense storytelling elements that allow for the gore to make more sense. The movies are also almost identical in terms of atmosphere. Being set in the desert, both filmmakers adopt a bright color scheme that makes it feel HOT. The Carters' frustration as a result of the heat translates effortlessly to the viewer, which creates a significant amount of tension in both versions. Not to mention, the 2006 remake uses "California Dreamin’" by The Mamas & The Papas (one of my favorite songs) on its soundtrack, which works really well because the California dream the Carters were headed toward is abruptly turned into a New Mexico nightmare.

Although as a Wes Craven fan girl it pains me to say this, the Alexandre Aja remake of The Hills Have Eyes, to me, is absolutely better than its original. To be quite honest, I completely fell in love with it. It is a perfect example of a formula that works for remakes because while it’s not a complete retelling, it takes flaws and fixes them without completely changing the integrity of the original. I can confidently say that if I had to recommend only one, it would be the 2006 version. Still, that’s not to take away from the complete classic that Craven gave us that would later lead to many more, as there would have been no remake without the original.